Much like its protagonist, the ill-fated King Saul, ABC’s biblical drama Of Kings and Prophets has had the odds stacked against it.

Originally slated to premiere last fall in the Sundays-at-10 time slot (now held by Quantico), Prophets was reserved for a later — much later — debut after hitting some creative speed bumps and recasting a number of roles.

And, though we hate to kick a new show when it’s down, initial critical buzz for the self-described “epic saga” — now laying claim to ABC’s “death slot” — has been largely unkind. (Curse you, easy Game of Thrones comparisons!) So, if you went into Tuesday’s premiere feeling a bit skeptical, we wouldn’t blame you. 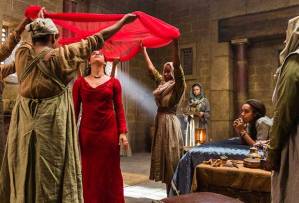 If you’re at all familiar with the Old Testament’s two Books of Samuel, you already know how Prophets‘ story ends, but we’ll give you the rundown anyway. The story focuses primarily on three men: Saul, who aims to unite the tribes of Israel; the prophet Samuel, who warns Saul that God does not want him to remain king; and David, a shepherd who is destined — spoiler alert! — to take Saul’s place as ruler.

Somewhere in between the steamy sex scenes and hushed conversations in the halls of Saul’s castle, the catastrophic events surrounding Saul’s reign are set in motion. When Saul goes to Samuel, asking for God’s blessing of his daughter’s impending marriage, Samuel delivers the message that Saul and his men must kill all of the Amalekites before the union will be blessed. And though he does kill most of the Amalekites in battle, Saul spares their king with plans to torture him — which goes against God’s wishes that the entire population be offed.

At the end of the hour, Samuel takes matters into his own hands and slays the Amalekite leader, urging Saul to fear the Lord’s plans for him — and, of course, Saul does not. But given David’s good reputation in the kingdom (for slaying a lion that was murdering his family’s sheep) and the presence of a handmaiden in Saul’s castle who is secretly spying on him for a rival house, it seems the king’s luck is about to drastically change.

Let’s put it this way: If the newly released Game of Thrones trailer won’t tide you over until the HBO drama’s return, Of Kings and Prophets would make a decent substitute, if only it didn’t take itself so seriously.

That’s our take, but what did you think of Kings and Prophets‘ debut? Grade the series premiere in our poll below, then hit the comments to back up your choice!