Uh, did everyone living at the New Girl loft miss the memo?

We could have sworn Tuesday’s episode was the Fox comedy’s 100th outing, but Nick, Reagan & Co. were hardly in a celebratory mood.

In fact, even though the milestone half-hour featured Jess’ return from jury duty, we’d venture to say that Tuesday’s installment was one of New Girl‘s most bittersweet outings. Before you give us your thoughts on No. 100, let’s briefly recap “Goosebumps Walkaway.”

First, the good news: Jess and her quirky songs are back! Yay! Now, the bad news: Her return to the loft means that Reagan’s time in the apartment is almost up — and when Nick’s hookup with Reagan is interrupted by Jess’ unexpected presence in his bedroom, Nick turns into World’s Most Awkward Human at the thought of splitting his time between two women that he’s romanced. (When you’ve got a peculiar gal like Jess freakin’ Day feeling embarrassed for you, that’s a sign you’re handling a situation really poorly.) 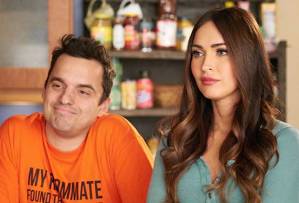 Fortunately for Nick, he doesn’t have to worry about any jealous feelings on Jess’ part, as she’s still pining after an anonymous juror she clicked with back at the courthouse. Reagan, looking to avoid Nick’s increasingly uncomfortable behavior, decides to help Jess track down Juror 237-B, and after some prodding from Ms. Day, finally admits that she’s crazy about Nick. Oh, she’s well aware that Nick is an oddball who calls hand sanitizer “ham sanitizer,” but he also “kisses you like a coal miner greeting his wife,” and Reagan can’t help feeling infatuated with the guy.

At first, Reagan is willing to brush the whole thing under the rug and board her flight the next day without telling Nick how she feels. But when Jess’ search for her mystery juror, Gary Garcia, comes to a screeching halt — considering there are 931 men with that name in the police database — she encourages Reagan to come clean to Nick, lest she miss her only chance. Aaaand naturally, Nick ruins the whole thing by trying, and failing, to sweep Reagan off her feet with a cinematic parting line: “Sayonara, Sammy.” (What? Seriously, what?)

But Reagan and Nick get one more chance to share their true feelings the next day, when Jess is unexpectedly reunited with Gary Garcia during a morning-news appearance to discuss the trial. Blown away by such a romantic twist of fate, Reagan gives Nick a call from the airport and returns the “Sayonara, Sammy” — code for “I totally dig you” — before begrudgingly getting on that plane.

As for the thrilling love story of Jess and Gary? It’s short-lived. They go on a real date and have nothing in common. Sigh.

With that, I hand it over to you. What did you think of New Girl‘s 100th episode? Grade it in our poll below, then hit the comments with your thoughts!