A year ago, Agents of S.H.I.E.L.D.‘s midseason premiere picked up from a winter finale in which a familiar someone had been “transformed” into an Inhuman something.

And now here we are again, resuming a season wondering what exactly has become of, in this case, He Who Was Known as Grant Ward.

A year ago, I wrote 1,000 words on the ABC series’ return. Here, I procrastinated, hemmed, hawwed, took a nap, made sure I had food for dinner, and… still I search for the enthusiasm to sum up the premiere.

I worry. I worry that with the formation of the Secret Warriors team comprised of Daisy, Lincoln et al, “ordinary folk” such as Coulson won’t be as active in the field. (Is that why Coulson got a Swiss Army knife hand? To give him some “inhuman” something, whereas May and Bobbi are inhumanly elite fighters? Who can blame Hunter for gobbling fish oil pills, if it means the chance for more screen time.) Obviously it was irresistible for the series, dinged very early on for being a superhero show minus superheroes, to assemble its own team of 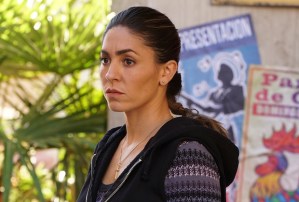 DON’T-SAY-MUTANTS. But I do worry where that leaves the JustHumans (especially when two are poised to be spun off).

Fitz and Simmons, played so heavily during Season 3A, were given token scenes in the winter premiere, simply to acknowledge the awkwardness foisted upon them by recent events and agree to start fresh. And May pretty much just had a brief scene, inviting Phil to join the Cavalry. Meanwhile, we spent considerable time getting to know the Inhuman known as (yet never called?) “Slingshot,” whose power was extremely nifty (if specific), though perhaps edged out by “Medusa Eyes.” At hour’s end, she bid us and budding crush Mack adieu — surely to return, though…? (In almost a heartbeat, guest star Natalia Cordova-Buckley proved to be quite engaging.)

Coulson met with President Ellis, hoping that visiting the site of Rosalind Price’s brutal assassination would prompt the leader to officially reinstate S.H.I.E.L.D. (and in turn override the MCU, as if!) Instead, all Ellis could do was nudge Phil to keep fighting the good fight on the down low — and alongside new ATCU head General Talbot. (That’s your “bonus scene” bombshell? Update: Even the “three months from now” prologue wasn’t as provocative as, say, Arrow‘s ongoing flash-forward, offering few clues to chew on outside of the floating cross necklace.)

Time will tell — quickly, I hope 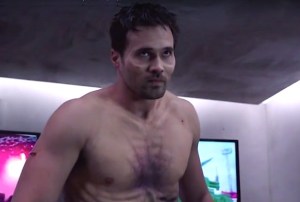 — exactly what sort of Big Bad the being known as Hive fka Grant Ward will be. Hopefully after gnawing on a few more raw slabs of meat, he’ll muster not just strength but personality. Though it is delicious to see pompous, powerful Gideon Malick (played by the always entertaining Powers Boothe) kowtow to this creature, as if worshiping some sacred, almost-as-mute golden calf.

Agents of S.H.I.E.L.D. worked hard, really hard, to find its stride and deliver a superhero-less show worth watching. At times, it has had brushes with “very, very good”-ness, especially coming out of Winter Soldier‘s big-screen game changer, or Skye’s aforementioned transformation. Now that it has a Season 4 to look forward to and plan for, my hope is that it continues to service all its characters and not let the Coulsons and Mays get overpowered by the powered.

What did you think of the episode “Bouncing Back”?