As a reality-competition junkie and the father of 5-year-old twins, I’ve already formalized my speech if one of my boys thinks he’s flying to Los Angeles and auditioning for, well, anything before he graduates from college.

Don’t get me wrong, it’s not that I look at artistic dreams as if they’re silverfish dashing across the kitchen floor, just begging to be squished. But in the words of the poet Casey Kasem, one must keep one’s feet on the ground if one wants to keep reaching for the stars, right?

Which is why I’m feeling some type of way after watching not one but two youthful contenders come to The Voice tonight pursuing the most fanciful of whims — but wind up looking like legitimate contenders for Jordan Smith’s crown and sash.

Granted, Malik Heard’s deferred college scholarship is destined to haunt me as thoroughly as Nicole Kidman and the rheumy-eyed lady in The Others. (Oh Em Gee, I love that movie.) And Peyton Parker’s teenage tale of convincing her parents to uproot their lives and move to Nashville and devote their entire existence to the pursuit of her dream scares me more intensely than a pre-school wizard staring into the eyes of Voldemort.

And yet… I’d be lying if I said I’m not excited to see what these promising kids do now that they’ve handed over their futures to Christina Aguilera and Blake Shelton, respectively. (Be gentle with them, coaches, for they know not what they’re doing.) 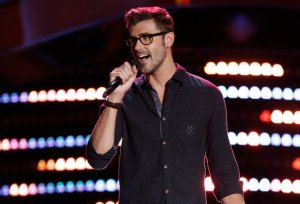 I’ll be as gentle as possible, too, as I rank the episode’s 11 auditioners in order from least-to-most promising.

9. Nate Butler – Mayer Hawthorne’s “The Walk” (Team Adam) | He had about as much control of his voice as Denise Richards has a grasp of nuclear physics. (*Yes, that was a Bond joke.) How’d he get three chairs to turn?

8. Brian Nhira – Pharrell’s “Happy” (Team Pharrell) | I love “Happy” (even in 2016), but it’s not the rangiest ditty. So how come Brian sounded so tinny and winded on parts of the chorus?

7. Brittany Kennell – Sheryl Crow’s “Strong Enough” (Team Blake) | Xtina was right that there was a Gwen Stefani-ish vibe to Brittany’s tone — but with an added quaver that I’m not 100 percent sure is pleasing to the ear.

6. Natalie Yacovazzi – Kelly Clarkson’s “Mr. Know It All” (Team Adam) | Her bombast on the opening verse was damned impressive, and while nerves crept in to this returning contestant from Season 9 — causing her to rush the tempo just a bit — it was still a pretty solid effort.

5. Hannah Huston – Allen Stone’s “Unaware” (Team Pharrell) | Hannah’s heavy enunciation bogged down the groove on the opening verse, but she’s got a terrific grasp of pitch and lots of nifty nooks and crannies in her tone. Working with Pharrell may provide just the upgrade she needs.

4. Kristen Marie – Tears for Fears’ “Mad World” (Team Xtina) | Aside from a few affected words and phrases, Kristen did a pretty sweet job of breathing her own life into a song that — for reality singing-competition junkies — will always belong to Idol’s Adam Lambert. The way Kristen’s voice expanded and contracted across the melody made me scrawl the words “human accordion” in my notes — and I mean that in the best possible way.

3. Peyton Parker – Fleetwood Mac’s “Dreams” (Team Blake) | Sometimes, all you need is a gorgeous melody, sung with deep feeling and even deeper restraint. Plus, as my husband noted during the commercial break, a vote for Peyton is also a vote to get her super supportive dad off the grueling six-days-a-week landscaping schedule.

2. Ryan Quinn – Blind Faith “Can’t Find My Way Home” (Team Adam) | Not only does Ryan have a killer backstory (he teaches music to kids who’ve suffered a trauma!) and matinee-idol looks, but his effortless falsetto and flawless phrasing helped him deliver one of Season 10’s best auditions. When the dude is belting in full voice, there are shades of Boston and Yes in his tone, too, so if he wants to expand his repertoire into classic rock, there’s room in that lane, too.

1. Malik Heard – Nick Jonas’ “Chains” (Team Xtina) | Holy smokes, that glory note of Malik’s ran longer than one of The Voice’s unnecessary pre- and post-commercial recaps — and it was phenomenal. There were definitely some Xtina-ian flourishes in his delivery, too, so here’s hoping they make a match made in Voice heaven.

What did you think of The Voice Season 10, Night 2? Vote for your three favorite auditions, and hit the comments to expand on your thoughts!