Based on DC Comics’ graphic novel series by Jason Aaron and illustrator R.M. Guera, Scalped presents a modern-day crime story set in the world of a Native American Indian reservation, exploring power, loyalty and spirituality in a community led by the ambitious Chief Lincoln Red Crow as he reckons with Dashiell Bad Horse, who has returned home after years away from the reservation.

Doug Jung (Banshee, Dark Blue) will pen the pilot, which has been in WGN’s development pipeline for almost two years, and serve as an executive producer with DC Entertainment CCO Geoff Johns.

Roadside Picnic, based on the 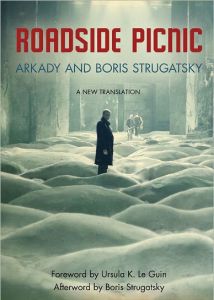 novel by Arkady and Boris Strugatsky (which previously inspired the 1979 film Stalker), explores a near-future world where aliens have come and gone, leaving humankind to explore the wondrous and dangerous mysteries left behind, as seen through the eyes of Red, a veteran “stalker” who has made it his life to illegally scavenge the abandoned remains of the alien culture.

Jack Paglen (Alien: Covenant) will pen the pilot, which is to be directed by fellow exec producer Alan Taylor (Game of Thrones). Neal Moritz (the Fast and the Furious franchise) and Vivian Cannon (AMC’s Preacher) also serve as EPs.

The pair of pilot orders come on the heels of the successful launch of the Appalachia-set drama Outsiders, which in its early weeks has nearly quadrupled WGN America’s primetime average audience, per Live+3 DVR data.