I’m worried about Eli Gold — and not just because he repeatedly manhandled a public-restroom wastebasket without immediately scrubbing his hands during this week’s installment of The Good Wife.

The right-hand man to Peter Florrick may have no knowledge whatsoever of the backroom dealings that could bring down his boss, but his name sure did come up a lot in those snippets of Grand Jury proceedings we heard through a bathroom ventilation shaft. Coupled with the fact that Chris Noth’s governor was once again completely absent from the action, and I’m left wondering if series creators Robert and Michelle King might be plotting the fall of a much more beloved character than Alicia’s husband by the time their series finale airs on May 8.

Who knows, though? As I witness what’s probably the final appearances of beloved characters like Owen and Veronica — where was her glass of wine, BTW? — perhaps I’m straining too hard to find order in the chaos.

At least the Grand Jury stuff brought with it a sense of genuine suspense and real stakes — unlike the “heard it all before” parlor games going on at Lockhart-Agos-Lee. Much as I long for juicy arcs for Christine Baranski and Matt Czuchry, the umpteenth reimagining of our central firm’s partnership structure has ceased to fascinate — especially now that Diane has set her sights on buying out Cary (!) without so much as a mention of treacherous David Lee or extreme liability Howard Lyman. (I mean, if Diane’s master plan was to forge her future with Alicia, why wasn’t she the one who pursued her return to the firm in the first place?)

As you ponder that question, let’s review the action from Season 7, Episode 16, “Hearing”: 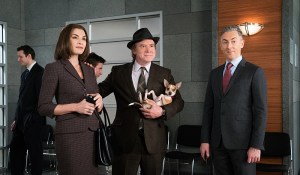 EVERYTHING’S GRAND (JURY) | Assistant U.S. Attorney Connor Fox (Matthew Morrison) tells Eli and the chihuahua-wielding Mike Tascione that they’ll have to guess in which of the “dozens of cookie jars” he believes he’s caught Peter’s hand. Mike plays it deeply weird, while Connor plays it overly confident, and the prosecution tips its hand more than it ever intended. It’s Alicia, though, who discovers the courthouse’s handicapped bathroom has a vent-shaft portal to audio from the grand jury room. Since Eli’s not an attorney, she deputizes him as eavesdropper in chief, and he figures out that Peter’s misdeeds involve something from 2012, involving donor Lloyd Garber and a “state vs. Locke” case. (While I appreciate the inventiveness of the Kings’ construct of only letting us hear Eli’s side of the audio — with interruptions from bathroom users, maintenance workers and the general mumbliness of life — it maybe isn’t as dramatically rewarding as you’d want it to be, no?)

Eli finally tracks down former prosector Cary to glean some intel on the Locke case, and learns the defendant in question was a “working glass guy” accused of murdering his girlfriend’s ex. His “amazing defense team,” though, led to the rumor that “his father was someone wo mattered.” Lloyd Garber, perhaps?

MEANWHILE, BACK AT THE FIRM | Cary and David call out Alicia and demand to know if Diane has approached her about splintering off/forcing them out. While she accuses them of paranoia, a few days later, Diane comes to her with pretty much that exact offer. Alicia says she just wants to be “of use” — c’mon, this isn’t Thomas & Friends — but Diane sums up our protagonist pretty accurately, I think: “You hide your ambition under a bushel, but it’s a very bright light,” she says of the onetime State’s Attorney candidate. Diane wants to partner with Alicia because she’s someone she thinks can outrace her, and which is. “You can slice an opponent to shreds, smiling the whole time, and they come back thanking you.” Alicia goes to Lucca for advice — 45 minutes in, and I have to admit I was desperate for a Cush Jumbo sighting — and her new BFF doesn’t hesitate with the right questions (will they make more money in a firm comprised solely of female partners?) and the right solutions (“tell Cary”). Whether or not Alicia follows that advice, time will tell. It’s a little head-scratchy, though, that she accidentally mixes up Will and Jason’s during the course of the conversation. 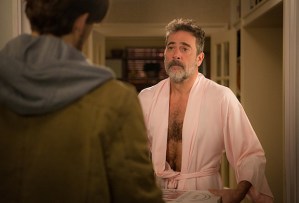 SEXYTIMES + BAGELS + MOM = AWKWARD | The hour opens with Alicia and Jason in bed watching the 1981 thriller Roar, probing each other (pun intended) for truths about their pasts, and also dealing with the unannounced arrival of Veronica and Owen, Eli and Mike. Alicia is mortified, Veronica is thrilled at the chance to be inappropriate and Jason handles it with his usual Cheshire chill. Veronica is there to announce she’s been Madoff’d, and while initially, it appears she’s got no one to blame but herself, Jason realizes she’s become part of a “suckers list” circulated by scammers. He saves the day for Alicia’s mom, and the duo winds up closing the episode just the way it began — in the bedroom and with a roar (both what’s on their TV and between the sheets).

Your turn. What did you think of this week’s The Good Wife? How are you feeling about Alicia-Jason? And are you bored by the Lockhart-Agos-Lee shenanigans? Share your thoughts in the comments!