A bachelor party, a wedding and (maybe) Schmidt’s first name, oh my!

When New Girl airs its milestone 100th episode next Tuesday (8/7c), the Fox comedy will kick off a run of very eventful spring episodes, most of them in preparation for Cece and Schmidt’s long-awaited nuptials.

But even before Cece takes that walk down the aisle, there’s other business for the show to attend to, including Jess’ return from jury duty, her first face-to-face interactions with Reagan and bachelor/bachelorette soirees that sound absolutely insane.

TVLine recently caught up with the stars and producers of New Girl to find out coming down Season 5’s homestretch. Read on to see what they shared:

THE BOY IS MINE | Now that Nick has locked lips with new-new girl Reagan, executive producer Brett Baer admits it would have been “the obvious decision” to make Jess jealous of Megan Fox’s character upon returning from jury duty this Tuesday. Instead, viewers will see the two women forging a unique — and perhaps slightly uncomfortable — relationship when they first meet. “I didn’t want to write a story with two women at each other’s throats,” explains series creator Liz Meriwether. “So we went the other direction with it. We kept all of the drama inside [Nick’s] head.”

REAGAN REDUX | Speaking of Fox’s well-received guest stint, Baer says there are “definitely” ongoing conversations about bringing Reagan back beyond her current arc, adding, “We love what her character brings to the table for the Nick-and-Jess dynamic — and for all the characters.”

FATHER OF THE GROOM | As Schmidt prepares to recite his vows in a few weeks’ time, The O.C.‘s Peter Gallagher will be back to play his father once again, Meriwether confirms. 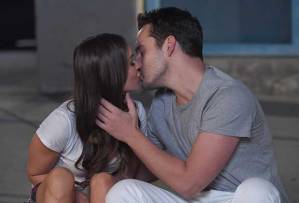 FIRST-NAME BASIS | Will Cece and Schmidt’s wedding ceremony finally answer the question surrounding the groom’s elusive first name? Meriwether says she and the writers are “leaning that way,” though Baer confesses it still might not be the right time: “Do we do it now? Do we hold it? We realize it’s very difficult to do a wedding and not mention people’s names.” (At the very least, Max Greenfield has his own idea of what his alter ego’s first name should be: “Brad. Brad Schmidt. I told Liz, [but the writers] don’t buy it.”)

GET THE PARTY STARTED | Considering Jess, Nick & Co. can barely get through a day without something going very, very wrong, it only makes sense that Cece and Schmidt will party hard during their final days as single people. Though Greenfield can’t say much about Schmidt’s “crazy” bachelor party, he can tease that it features “the desert and motorcycles,” while Hannah Simone says Cece’s bash “may involve — accidentally — some criminal activity.”

WEDDING DAZE | Though Meriwether assures us that Cece and Schmidt will make it down the aisle by season’s end, she and her fellow EPs agree it’s been tough to craft a wholly original TV wedding. “We’re trying to do it in a unique way,” Baer shares. “We’ve done one wedding already for Cece, so we want this one to be more special and emotional.”

WHAT’S WINSTON GOT TO DO WITH IT? | And lest you be concerned that Winston won’t get a romantic storyline of his own this season, Morris implores you to think again. “[The writers are] playing around with an idea that I have a crush on my cop partner, Aly, played by Nasim Pedrad,” he reveals. “I don’t know if it’s going to go there or not. [Pedrad] did just get a pilot picked up… but if it were up to me, yeah, Winston needs some love.”

WILL THEY OR WON’T THEY? | That only leaves one question: What will become of Nick and Jess? Even in the wake of last Tuesday’s Nick/Reagan kiss, Meriwether isn’t ready to give up on the spark between the maybe-soul mates. “Ships never sail. In many ways, their relationship is the heart of the show,” she says. “Actually, Nick’s relationship with [Reagan] helps bring things into perspective for Jess, in a good way. There’s definitely some developments that are on their way by the end of the season. Dot, dot, dot.” (With reporting by Vlada Gelman)

New Girl fans, which of our scoops are you most excited about? Sound off in the comments!