Pete Nowalk says that being executive producer of How to Get Away With Murder is a little like riding a high speed train.

“All of a sudden, you find yourself at the end of the season” with myriad twists and mysteries still in play, he explains. “And then there’s a feeling of, ‘Oh my God. We’re not going to make it!'”

“Right now, we’re doing a lot of picking and choosing about which stories we want to leave hanging, and what questions we want to answer,” he teases. “I want to answer as many as possible. You can tell me in two weeks if we pulled things off.”

Nowalk took a break from editing the Season 2 finale to chat with TVLine about Thursday night’s episode — in which we discovered that 10 years ago, Rose committed suicide right in front of Annalise, and that in the present day, Bonnie learned the long-overdue truth about who killed Lila Stangard. Read on for Nowalk’s take on those arcs and more. 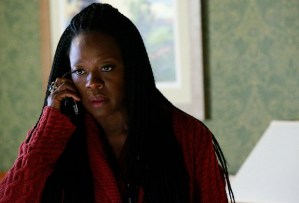 TVLINE | How to Get Away fans have been trained to look for the unexpected, to dive into conspiracy theories. But this week, we found out that Rose actually did commit suicide. Did you deliberately hope to shock viewers by having the reality turn out to reflect exactly what the medical examiner reported 10 years ago? Did you always know we’d learn that Rose would die at her own hand?
No. We never assume anything, because we discover things in the writers’ room. Ultimately, I decided she needed to kill herself because the other options just felt… too obvious. I always want to make the choice that sends us into newer story, and now the question is, “Why did Rose kill herself?” It doesn’t really make sense right now if you’re Annalise in [flashbacks]. So we really send Annalise into the next episode asking that question, and I really think the answer is satisfying and surprising.

TVLINE | When Rose is talking about Wallace Mahoney, we get a sense something might be terribly wrong. And then, for her to take a knife from the kitchen and stab herself in the neck — in an effort to protect herself from this man and his family — is totally shocking. How dangerous is Wallace?
It’s clear that Rose is extremely scared of the Mahoney family. From what we’ve seen of Wallace Mahoney, he’s not a good guy. We’re going to find out exactly why he’s not a good guy in next week’s episode — and where his motivation is coming from. It is a bombshell.

TVLINE | Of course, now we know that Annalise has been aware all along that Rose committed suicide — and in the present day, she knows Wes is spiraling from his investigation into the circumstances of her death. It feels like — with him having seen the police report naming him as a suspect — Annalise has to come clean and tell him what she knows.
By the end of the episode, [Annalise realizes] Laurel was right — that she needed to get things in order and tell Wes the truth. Since she said “Christophe” to Wes [after he shot her], Wes has been wanting to know the truth and she hasn’t been willing to tell him. I don’t want to give away too much, but Wes will find out a version of the story — and Annalise, of course, is going to have to eventually explain why she didn’t tell him. There’s a good reason why she didn’t.

TVLINE | You have a lot of balls in the air — and only two episodes left in the season — and yet we got another big moment with Bonnie. She had to bring out her inner boss so much the last few weeks that I forgot about her Lurky McChurchmouse ways. And then there she goes and tape records Frank admitting to Laurel how he killed Lila.Can we expect her to act on that information in some way between now and the end of the season, or were you planting seeds for Season 3?
We’re not going to let that linger too long. Bonnie killed Rebecca because she thought Rebecca killed Lila. That is a huge deal for Bonnie. Her whole world has been upended. She also has the dilemma of wondering why Frank did this. Does she want to tell anyone? Laurel even said it to Frank, “if I tell anyone this, it just makes it worse for everyone. I’m not going to ruin their lives that way.” Bonnie is in the same predicament. Of course, Bonnie and Frank have a history and a past. We’ve seen her kill before. Will she kill again? Who knows?

TVLINE | We still don’t know why Frank killed Lila in the first place. We know he did it with Sam’s knowledge, but that’s all. Can we expect an answer to that mystery by the season finale?
Yes.

TVLINE | How crazy is that going to be?
It’s crazy, I’ll say that. We’ve seen Frank in the past. We’ve seen Sam in the past. We’ve seen Bonnie. And now we’ll see how all these threads unite into one story, which has been our goal. We ended last season with the reveal that Frank killed Lila for Sam, so we definitely have to answer that by [the Season 2] finale. You’ve been waiting patiently. We don’t drag things out that much — and this is one that we dragged out longer than most — but only because it comes together in a very shocking but also satisfying way. 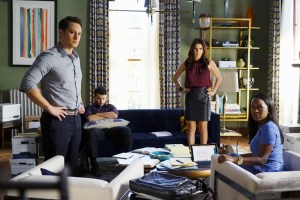 TVLINE | You had some really sweet moments too in this episode. I loved the Connor/Michaela moment during the sleepover. Can we expect any other characters to show that type of reliance and support in the coming weeks?
I love that moment too! They’ve come a long way. I’ll say Asher, in the next episode, shows himself to be a lot more observant than anyone has assumed. In a way, he’s probably the sweetest of all of them. He showed that in the car scene we had a few weeks ago, where he was upset that none of them talked to each other. In certain ways, Asher is this very observant “mama bear” of the group, and you’ll see that next week.