Matthew Morrison knows firsthand the perils of joining the Good Wife cast after seven seasons as a self-described “superfan.”

“My biggest problem was trying to remember everyone’s real name,” he explains, with a chuckle. “Every time I went to talk to Julianna [Margulies], I wanted to say ‘Alicia.'”

The actor’s work as Assistant U.S. Attorney Connor Fox, however, is no laughing matter — not as he convenes a grand jury to pursue charges against Chris Noth’s Gov. Peter Florrick starting with this Sunday’s episode (9/8c on CBS).

“I think he’s a good guy. He’s a tough guy. He doesn’t take a bribe,” says Morrison, when asked to describe his character. “He’s passionate about the law, and he’s taken down a few governors in the past. Peter’s been a bad boy in the past — we all know that — and now there are some repercussions.” 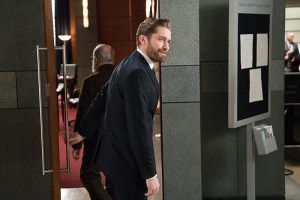 Morrison promises that Sunday’s installment will definitely spell out the nature of Peter’s transgressions — but just because Connor is on the right side of the law doesn’t mean he’s expecting longtime Good Wife fans to side with the prosecutor.

“These characters are so beloved — and I’m definitely stirring the pot. I’m sure there’ll be a backlash, but that’s OK,” he says. “It’s a fun part to play. I don’t usually get to play what I guess you would call the villain — even though he does believe he’s doing good.”

To Morrison’s surprise, showrunners Robert and Michelle King told him there were no political motivations to Connor’s character — which is one of the reasons Morrison fashioned him after a real-life U.S. Attorney, Patrick Fitzgerald, who brought down Illinois Governors Rod Blagojevich and George Ryan.

That said, Morrison’s initial episodes will mainly feature him going toe-to-toe with Alan Cumming’s Eli Gold (aka Peter’s campaign guru); he’s only begun filming with Noth this week. “Connor doesn’t really go along with Eli’s bullishness and his craziness. I just laugh it off a little,” the actor teases. 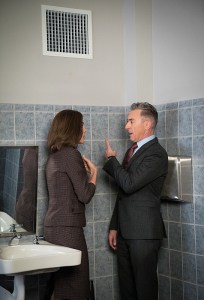 Asked about a promo photo released by CBS (embedded at right) — and whether we’re to assume Eli and Alicia are eavesdropping on Connor through a courtroom bathroom vent — Morrison responds with a hearty chuckle. “If you think that, you should go buy a lottery ticket now,” he says. “You have good intuition!”

That scene in particular underscores how “other people will try to out-maneuever Connor,” Morrison says, adding that in the scripts he’s seen, there haven’t been any core characters or ghosts of Good Wife past who’ve turned against the Governor. “None of the main tribe joins Connor’s corner,” he says, laughing. “But there are some extras on the show that I’m really friendly with!”

And while Morrison adds that he hasn’t seen any sign of his “pretty badass” character having an Achilles’ heel, there’s still time for him to stumble. While his Good Wife gig was initially slated to last four episodes, “it looks like I’m going to be around through the very end,” Morrison shares. “They asked about [availability] for [shooting] the final episode.”

Are you excited about Morrison’s Good Wife arc? Any predictions about whether Peter or anyone in his circle will wind up in jail by the season finale? Thoughts and predictions below, please!