The four men remaining in the running for the Republican Party’s presidential nomination assembled Thursday for the 11th GOP debate, and — surprise! — Donald Trump dominated the two-hour event with utter nonsense.

Below, enjoy five of the former Celebrity Apprentice host‘s craziest statements from the debate:

* On Mitt Romney, who publicly denounced Trump’s candidacy earlier today: “[Romney] was a failed candidate. He should have beat Obama easily. He failed miserably. It was an embarrassment for everybody, including the Republican Party. … He wants to be relevant, he wants to be back in the game.” (It should be noted that Trump was asked to speak about his own policies, rather than simply attacking Romney.)

* On former Ku Klux Klan Grand Wizard David Duke’s endorsement of the Trump candidacy: “I totally disavow the KKK. I totally disavow David Duke. … You’re probably the 18th person who’s asked me this question. … Take a look at my Twitter account.” (We’re glad Trump has publicly denounced the Klan, but let’s be real: If one’s feelings about the KKK need to be clarified, there’s a larger problem there.)

* On calling Senator Marco Rubio a “lightweight”: “I would like to take that back. He’s really not that much of a lightweight. He [made fun of] my hands. Nobody has ever hit my hands. Look at my hands. Are those small hands? … He said that if my hands are small, something else must be small. I guarantee, there’s no problem.” (For those keeping score at home, yes, Trump was referring to his penis.)

* Trump also came up with a few nicknames throughout the debate — move over, Cisco Ramon! — including “Little Marco” and “Lying Ted.” (He didn’t have a nickname for Ohio Gov. John Kasich, but I think “the only sane guy” works just fine.)

In need of a palate cleanse? Enjoy this shot of Senator Ted Cruz from the debate (and feel free to drop your theories about that white thing on his mouth in the comments section below): 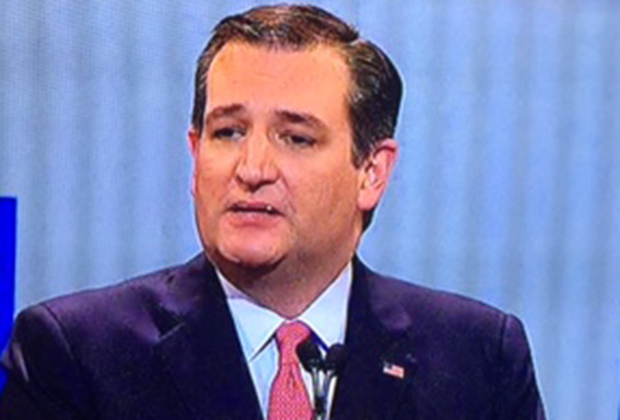 Your thoughts on Thursday’s debate, particularly on the comments made by frontrunner Trump? Drop ’em in a comment below.