Has Mike Ross made a deal with the devil?

As USA Network’s Suits serves up its Season 5 finale (tonight at 10/9c), Mike has given Anita Gibbs what she wanted — his admission of guilt, as a fraud, in exchange for the U.S. attorney keeping Jessica, Harvey et al out of her crosshairs.

Here, Patrick J. Adams previews the blowback Mike will sustain from those close to him, as a result of his selfless act. Plus, could Mike survive life behind bars, that is in fact where he winds up?

TVLINE | How does tonight’s season finale compare to previous ones?
I think it’s a more of a game changer than we’ve ever really done. We’ve had a couple of major, major moments where the show has taken a twist, but this is the first time that we’re doing something [where] you can’t put all the pieces back exactly where they were before. That is a really exciting thing to do to a show, especially in its fifth season. You can either try or replicate what has worked for so long or you take a risk and push these characters in new directions. The writers made a really brave decision to do what needed to be done, and I don’t think the show will ever quite be the same.

TVLINE | Coming off last week’s cliffhanger, what is Mike’s mindset? How certain is he about his decision to make a deal with Gibbs?
He’s pretty determined, after having that moment with the small case he was helping with in the courtroom, and realizing 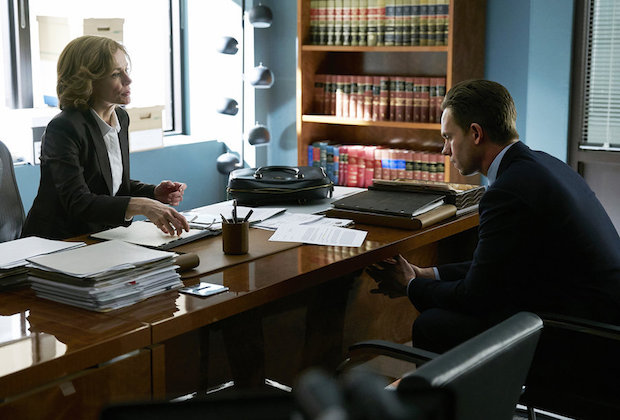 as he watched his client sign that piece of paper that no matter what happens and no matter what the jury decides [with] his case, it’s just going to be a never-ending nightmare for everybody involved. They’re always going to be coming after him, Harvey, the firm. He knows that there’s really only one way to make up for what happened, and that’s for him to take the bullet.

There’s a version of this where the season would have ended with that decision being made, and we would have gotten to spend the next season seeing what comes from that decision. But I really like that we have this last episode to see him living with the decision he’s made. That made for a lot of really interesting scenes.

TVLINE | The show makes such good arguments for why Harvey should take the bullet, why Mike should take the bullet. There’s this great back and forth.
Yeah. Mike and I share the opinion that he’s the guy who made the decision to do what he did and it should be his responsibility to fix it, but there are a lot of good arguments to be made that Harvey should have known better. I just don’t think there’s a world in which Mike, being who he is and coming from where he comes from, having had so few people in his life that he could really trust and not really coming from a family, would allow anyone else to take the fall. That speaks to his character and that’s what’s sort of great about what’s going on with him in all these scenes, even though it’s sort of heartbreaking. The last thing anyone would ever want for this character is to see him go away and have to pay the price for what he’s done. At the same time, in some ways, he’s a man for the first time.

TVLINE | Standing outside of the character and looking at this objectively, do you think Mike should go to prison?
You know, I probably have to get into my feelings about prison. We have prisons filled with people who don’t really belong there. Do I think it’s a victimless crime, essentially? No. There’s a good chance that a lot of the good that he’s done would be undone when it’s realized that he’s not a real lawyer. I’m not entirely sure if all those cases would have to be retried or if settlements would have to be reassessed…. I don’t think it’s totally out of the question that he could be in prison, but I think it would probably be better to put his particular skill set to some serious community service of some sort.

TVLINE | Can you picture Mike in prison? If push comes to shove, does he have what it takes to survive?
I think Mike is extremely resourceful. In some ways, it’d be like hitting reset. When we started the show, Mike was a total fish out of water in this new law firm and having to quickly get his bearings and figure out how to exist in this new world. I don’t think it’d be much different in prison.

TVLINE | We saw Harvey running to Gibbs’ office just as Mike was making the deal. How will Harvey react to what Mike has done?
He’s really unhappy. You’re seeing the best of both of these guys in this moment. They’ve been fighting so much in these last few episodes, but it has been, I think, the most interesting Mike/Harvey conflict because it’s all based out 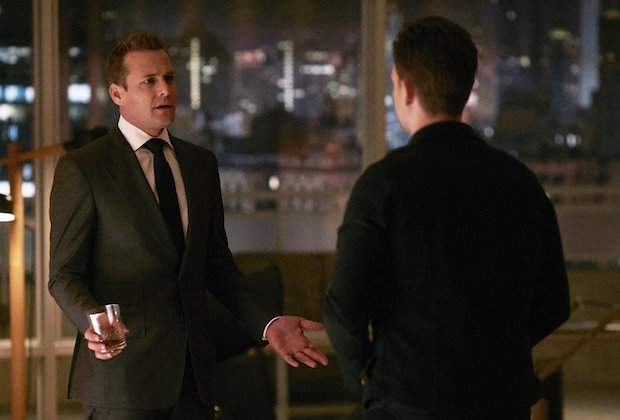 of love for each other and them wanting to take care of each other. They have a common goal, which is to get them out of this mess and make sure that nobody has to go to prison. As Mike makes this decision, that’s really hard for Harvey to accept because, to some degrees, he feels like it should have been him. He feels that he made a choice once upon a time to let this kid do something that was illegal and now because he made that choice, this kid’s life could essentially be ruined. That’s difficult for him to accept.

TVLINE | Rachel has been unfailingly supportive. Will she continue to stand by him even as he makes this deal?
That’s really the harder thing. Matters of the heart are more difficult. Mike and Harvey being “brothers from other mothers” can find a way to shake hands on this and just say, “Alright, we’re going to grit our teeth through it and come out clean on the other side.” But it’s a lot more complicated with Rachel. She’s got her whole life to think about. These two people are really in love, but they’re going to have to deal with the fact that not only is he going to be gone for two years, but also that the choices that he’s made could really affect her whole life and her career. That leads Mike to make some very difficult decisions about how to leave it with the woman he loves.

TVLINE | Without spoiling anything, did the season end the way you thought it would?
This is one of the few seasons where the writers room and [executive producer] Aaron [Korsh], specifically, were really clear about how it was going to end. You never know, they could have changed it at any moment – even in this episode, there were some pretty big plot changes right at the last minute – but the actual final moment of the episode was something that we’ve been working towards the whole season. I’m happy that we stuck with it.

TVLINE | Lastly, was the campaign to bring back Jesse on Orphan Black successful?
[Laughs] I am, sadly, not going to be there this season. It was a very difficult scheduling conflict. I’m actually on my way to San Diego right now — we’re doing a play down there and I had to be in rehearsals, so I could not be up there [in Toronto]. But as you know, I’m a huge fan of the show, and I think they’re a fan of Jesse. So hopefully, you haven’t seen the last of him. But this season, he’s on a sabbatical. He has a lot of towing gigs he has to do.

Want scoop on Suits, Orphan Black or any other show? Email insideline@tvline.com and your question may be answered via Matt’s Inside Line.