Warning: The following contains spoilers for Wednesday’s finale of Suits.

The day of reckoning has finally come for Suits: Mike is trading in his designer duds for an orange jumpsuit.

During Wednesday’s Season 5 finale, the faux lawyer took responsibility for his crimes and entered a white collar prison. (FYI: The jury would have come back with a “Not Guilty” verdict. #Regrets) Even Harvey’s last-ditch efforts to save his protégé were unsuccessful. Before heading off to the clink, Mike made another difficult choice: At the last minute, he aborted his plan to marry Rachel so that she could fulfill her dream of one day becoming a lawyer.

With Mike’s past catching up to him in the final six episodes, “Everybody said, ‘This is the only way it could end. It is inevitable. It’s going to happen,'” executive producer Aaron Korsh says of the fraud’s trip behind bars. In not skirting the consequences of Mike’s actions, the stage is set for a big “change” in Season 6.

“There’s going to be new characters, [a return] to some humor and a new setting,” the EP previews. “Our hope is that new life has been breathed into the show.”

Below, Korsh describes next season’s “uncharted territory” and weighs in on when the long-running drama will end.

TVLINE | There was some speculation that Harvey and the firm would find a way around Mike going to jail. Why did you decide not to go that route?
First of all, he did it. Once he got arrested and they were caught, it’s pretty tough to get out of it. Most people would think once he was caught, he really would likely be found guilty. The reason I think people thought we would get him out of it is because we’re a TV show, and that’s what TV shows do. The only way you can surprise your audience is if you can surprise [them] in the big things and deliver a message that, “You don’t know what’s going to happen.” We just decided this is likely what would happen if the situation [was real] and, “Let’s just do it. Let’s just see if it brings new life into the show and invigorates [it].” We took a chance. 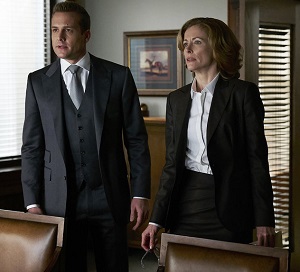 TVLINE | When Harvey was trying to get Mike out of his plea deal, he went to Anita Gibbs and she really laid out some truths that I don’t think he’s ever heard in that way before. Did he learn any lessons from that experience that he will take into next season?
I doubt it. [Laughs] A lot of people wondered why Anita Gibbs was so hellbent on getting Harvey. Part of it was that they had a fake lawyer, and she’s a lawyer, so it was personal for her in that regard. But in addition to that, if you have access to corporate murders and you kept it to yourself, what else did you do to cover up this [fraud]? When you do something like this, it leaves you incredibly vulnerable to a lot of other much worse choices because you’re worried about self-preservation. That’s why it’s important for her to prosecute them.

That’s an interesting lesson, but whether that lesson will really land on Harvey remains to be seen in the next six [episodes]. Hopefully, he won’t do something like hire a fraud again. But at the end of the episode, Mike says he would do it all again. The truth is, Mike wouldn’t have met Rachel. We don’t know what Mike’s life would be had he not gone through all this, and when he gets out of prison, he might be better off than if he’d never done this in the first place.

TVLINE | How does this ending shake up the foundation of the show? What does next season look like?
The original premise of the show is gone. It’s gone in two ways. Obviously, the biggest and most important way is Mike no longer has a secret… and he is going to be in prison. The other way that everything’s changed is, everybody from the firm was gone. So moving forward, we decided, “Let’s pick something that’s incredibly impactful. Let’s shatter everything and see how we, as writers, and our characters can pick up the pieces.” That’s what Season 6 is going to be about.

TVLINE | There won’t be a time jump at the start of Season 6?
Nope. As a matter of fact, we actually pick up that very night, and the entire episode, as it currently stands, takes place that night. It’s sort of a back and forth between Mike’s first night in prison and our first night dealing with coming back to an empty firm.

TVLINE | I know Harvey seemed a little bit relieved after their fight, but does Mike have what it takes to survive in prison?
We’re going to find out. [Laughs] The good news is, I’m pretty sure he won’t die in prison. 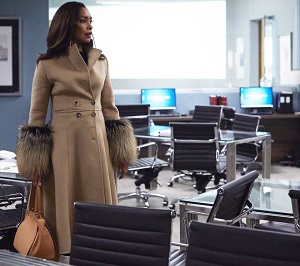 TVLINE | How is the firm adjusting to having lost all its employees? Is there now a need to repopulate with new characters?
Yes, there absolutely will be. With Mike in prison and us figuring out what we’re going to do with the firm, there’s room for a lot of things that can be different… Obviously, [there will be] new characters in prison. We’re going to have new people who are interacting in whatever firm setting we end up landing on. But in addition to that, we’re allowing for the addition of some humor back into the show. The last six [episodes], we were very serious. The stakes were very high… We don’t have that hanging over our head anymore, so it allows us to tell some funny stories again, which we, as writers, have been missing and the fans have been missing.

TVLINE | Mike’s journey really came full circle this season. Do you feel like you’re nearing the endgame of the show?
I’m not sure about that. I just renewed [my deal with Universal Cable Productions] for two years, so I’m assuming we’re likely to have a Season 7, and it’s certainly possible we’ll have a Season 8. I would say we’re not in the upswing of the show’s life cycle. There have been shows that have lasted a long time and much longer than us, twice as long at least. I don’t know how close we are to the end, but I know we’re very likely closer to the end than we are to the beginning.

But rather than thinking about how it’s going to wind down, we just want to see how this season plays out and then after that, yeah, it might be time to start thinking about, “Where are we going with this thing?” But so far, we’ve done a good job just taking each season as it comes, and that’s probably where we’ll continue to go. This Season 5 finale, in my mind, is probably the closest thing to a series finale that I ever could have envisioned if I had envisioned one. So we’re into uncharted territory.

Suits fans, were you surprised by the season ender? Grade it via the poll below, then hit the comments to back up your pick!