Serialized mysteries are a tricky thing. Dole out your secrets too slowly, and the audience gets bored. Front-load your bombshells in the first few episodes, there’s a risk viewers will roll their eyes and groan, “Well, this is all just a bit too much.”

Luckily for ABC , its latest entry into the genre, The Family, is like Baby Bear’s bowl of porridge in the story of Goldilocks: Not too hot, not too cold, and — at least based on the two hours screened for critics — so addictively delicious you’ll be scraping the sides of the bowl to make sure you don’t miss a morsel.

The pilot episode (airing Thursday, March 3, at 9/8c, before the show settles into its regular Sunday, 9/8c timeslot) begins with a jarring juxtaposition: Eight-year-old Adam Warren goes missing while his mother Claire campaigns for City Council; 10 years later, we see a teenage boy stumble out of the woods and back to Red Pines, Maine — claiming to be the presumed-dead child. 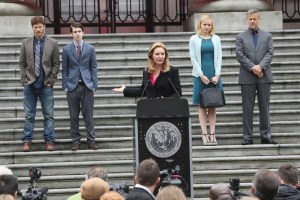 Writer Jenna Bans (Grey’s Anatomy, Scandal) excels at painting vivid characters who are never quite as they appear — but without every falling into the trap of making these folks behave preposterously just to advance a plot twist or to make us gasp before a commercial break.

Matriarch Claire can be scarily ambitious — she announces her gubernatorial bid mere days after Adam’s return, while he stands behind her like a dazed prop — but Oscar nominee Joan Allen brings so much nuance to the role that it’s easy to understand (and even sympathize with) the way this woman used politics and power to replace the Adam-sized hole in her life.

Similarly, every member of the Warren clan is harboring sins both glaring (eldest son Danny’s alcoholism) and hidden (religious daughter Willa’s enigmatic confessions) — but, as Adam (played in a state of eerily arrested development by The Killing‘s Liam James) underscores in one touching scene with Danny, they’ve got pretty good excuses for their bad behavior. (It helps that Friday Night Lights‘ Zach Gilford and The Newsroom‘s Alison Pill are infinitely watchable as they unspool Danny and Willa, as is Boardwalk Empire‘s Margot Bingham as the Det. Nina Meyer.) 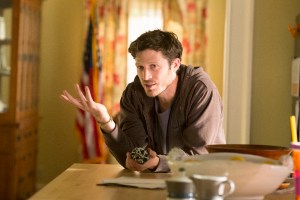 There are, however, real monsters in this tale — and the entire enterprise is tinged with a palpable sense of dread over what happened to Adam in the past, whether this actually is Adam in the present, which of the Warrens might be guilty of more than garden-variety offenses, and what the heck is the story behind the not-so-innocent neighbor Hank (Pretty in Pink‘s Andrew McCarthy), the man who confessed to and has been imprisoned for Danny’s murder for the last decade.

Like the British accent that occasionally slips into Rupert Graves’ delivery (he plays patriarch John, who’s made a career writing about the grief of losing a child), there are a few arcs on The Family that could use a little work. A sideplot about a local newspaper investigation into the Warrens’ tragedy sticks out like a clichéd thumb, and the few glimpses we get of Adam’s apparent abductor feel like they’re transplanted from an altogether lesser and different series.

Still, those little missteps hardly detract from the thrills and chills of The Family. And as a result, we’re putting our faith in a series where no one seems completely trustworthy.

The TVLine Bottom Line: You wouldn’t want to be related to these people, but you’ll definitely want to spend time with The Family.