Remember the good ol’ days, when Supergirl‘s weekly enemy was a piece of cake like Livewire?

Sure, she could absolutely ruin someone with her electric touch, but she could also be defeated with a bucket of water, Wicked Witch of the West-style — and that simple solution seems too good to pass up now.

Because now, when Supergirl battles her latest foes, it’s not so cut-and-dried. Instead, Kara’s finding herself caught up in all sorts of moral dilemmas each time she fights a bad guy, and Monday’s episode is no exception.

We’ll start with this week’s villain, Indigo, played by Smallville‘s Laura Vandervoort. She’s described as a “living, strong-willed supercomputer,” but really, she’s just the Internet in human form, and she’s wreaking havoc by dismantling National City’s mainframe. Bank accounts are frozen, power lines go haywire and, worst of all, an Ashley Madison-esque adultery website has been hacked, with the names of thousands of cheaters threatening to be revealed. (Nothing like a ripped-from-the-headlines plotline, eh?) 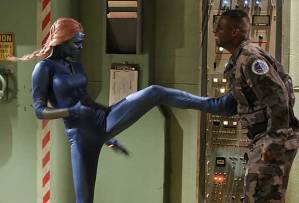 But with the help of Winn’s techie prowess, Indigo’s ulterior motives are quickly revealed — and, to no one’s surprise, she wants to destroy the world by way of the military’s nuclear missiles. Ultimately, even though Indigo is able to launch one of the nukes, Supergirl manages to track it down and send it sailing into the ocean before it can do any damage — and that’s the least of her problems by the end of the hour. Before Indigo meets her demise by shattering into a bunch of tiny pieces, she informs Kara that she was the one who rescued her from the Phantom Zone, back when Kara was sailing toward Earth in her pod.

“You’d still be back there if not for me,” Indigo manages to say before she explodes, leaving Kara thoroughly conflicted as to how she should feel about her latest adversary. (But she won’t be left wondering for long: In the final moments of the episode, Non is seen laying all of Indigo’s severed body parts out on a table, before asking her corpse, “Are you ready to try things my way?” So, Indigo is far from gone.)

* Even though Cat’s new assistant, Siobhan, is still primarily operating in Feisty Mode, she softens a bit this week when she reveals to Winn that her dad once cheated on her mom. (And Siobhan walked in on it. When she was a child. Ick.) When Winn runs into the CatCo rookie a few days later, as her childhood trauma seems to be getting in the way of her job, he opens up about his own daddy issues and reminds Siobhan that most people in life actually want to help her. And then she pushes Winn into the elevator bay so they can make out. Rebounding from Kara FTW!

* When James continues to snub Lucy in favor of working alongside Kara — and accidentally blows off their dinner date so he can accompany Kara to the Fortress of Solitude — Lucy gets visibly restless in her relationship with Mr. Olsen. In classic Kara fashion, she tries to give Lucy a pep talk and make her feel better about James’ recent absence… but when Kara inadvertently reveals that she knows a lot more about James’ personal life than Lucy does, Lucy decides to call it quits with her man. (And right when he’s about to reveal the truth about Kara being Supergirl, too. Poor timing not FTW!)

* Unable to live with the guilt of killing Astra (and unable to deal with Kara’s strained relationship with the DEO because of said death), Alex decides to come clean that she was responsible for murdering Kara’s aunt. At first, it seems that Alex has ruined everything with her confession, but when she breaks down in tears and tells Kara, “I can’t lose you,” Kara wraps her sister in a big hug — and extends an olive branch to Hank, too.

OK, your turn. What did you think of Monday’s Supergirl? Sound off in the comments!