It’s going to be a very busy Monday for Laura Vandervoort.

Not only will tonight’s TV lineup bring a showdown between Elena and the Russian Alpha Roman on Bitten (Syfy, 11/10c), but Vandervoort will return to her comic-book roots when she makes her Supergirl debut (CBS, 8/7c).

This is just one of several meta moments that Supergirl has facilitated in its first season. Dean Cain (a former Superman) and Helen Slater (a onetime Supergirl) pop up occasionally as Kara Danvers’ adoptive parents on the CBS series, and Vandervoort herself played Kara Zor-El on The WB/CW’s Smallville.

TVLine caught up with the actress in advance of her first Supergirl episode, where she’ll kick off a recurring run as super-computer villain Indigo.

Read on for intel on what Vandervoort thinks of the CBS series overall, how her Kara Zor-El costume compares to Melissa Benoist’s and what Bitten fans can expect from the imminent Elena/Roman face-off.

TVLINE | Even eight years ago, when you were playing Kara on Smallville, there were rumblings about an eventual Supergirl series. Is what CBS is doing in line with what you imagined?
One hundred percent, yes. When we were working on Smallville, it wasn’t officially discussed, but I had heard rumblings as well about a series being done. The timing wasn’t right. There were the 90210s and Melrose Place-type shows. And I’m just glad that now we’re seeing the ability to have a female superhero leading the way. Other superhero shows are doing so well right now, and I think that’s due to sci-fi having such incredible characters. It allows an audience to escape for a while, and sci-fi and comic book fans are so dedicated to these characters. The fact that we have a Supergirl series now — it’s brilliant. They’re doing a fantastic job, and it’s exactly what I would have imagined the show to be. She’s not perfect, she’s strong in finding her way. That’s all we need to see in female superheroes. They’re not going to have it all figured out, and I love what CBS has done with the direction of the character. 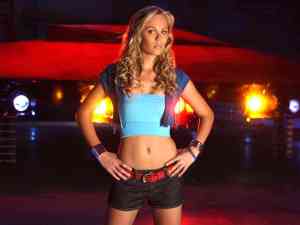 TVLINE | I have to imagine you’re a little envious of Melissa Benoist’s costume compared to your Kara outfit. At least she has tights!
[Laughs] She’s got an awesome costume. She’s got the muscle padding and the cape and the whole nine yards, even the “S.” On Smallville, mine wasn’t quite as workable. [Laughs] It was jean shorts and a belly shirt. And again, that was a part of the time and the style of Supergirl that we were portraying, which was a young, rebellious, teen Supergirl who thinks she has it all figured out. I didn’t have the cape, so I was actually in [Melissa’s] wardrobe and touched the cape just to feel the weight of it. It’s a really, really cool costume, and she wears it well.

TVLINE | A lot of Supergirl viewers will be aware of your history with the character of Kara. Can they expect any wink-and-nod references to your experience on Smallville?
There’s no specific reference, but I’m sure there are lines that people can [use to] draw parallels to me having played her before. I’m sure everyone’s going to find something in there, even if it’s not intended.

TVLINE | Your hair and makeup look incredible for the role of Indigo. How long does it take to transform into her?
The hair and makeup process is three to four hours. I actually took a time-lapse video of the process, which I hope to release [this] week. I really felt the character coming together as the makeup went on, and I became more blue. That’s where I directed how I’m playing her. I watched our stunt girl and how she moved, as well as putting on the suit and the whole nine yards. It transformed me. It’s actually a prosthetic on my forehead with three LED lights. That goes on first, and then the bald cap, and then I’m completely painted blue and the wig goes on. It’s not a difficult process, it’s just lights that have to go on and off under the wig. It’s actually a fairly comfortable suit — just not a lot of room to breathe. [Laughs] 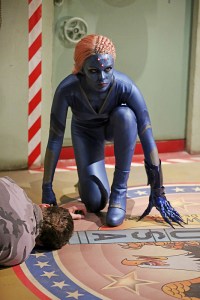 TVLINE | Most of Supergirl‘s Villains of the Week are disposed of within the hour. Since your character is recurring, can you say how difficult it will be for Kara to defeat Indigo?
She’s a pretty great nemesis for Supergirl. She’s matched in strength, and the fact that she’s able to transport through the Internet and technology makes her hard to grab. She can pop up at any point, anywhere. She can move through computers to get to people on the other side. There’s that extra quality to her that Supergirl can’t always handle. And Supergirl actually goes to the Fortress of Solitude to try to find a way and learn how to properly fight Indigo, because she is so frustrated with the fact that she can’t defeat her.

TVLINE | It’s been rumored that you were in talks for a few other Supergirl roles, but your shooting schedule for Bitten prevented those from happening. What roles were you considered for?
I had actually heard that later on. I was shooting Bitten at the time, so my team didn’t tell me about the other roles because I wasn’t even available, and I probably would have wanted to play them all anyway. [Laughs] Timing-wise, it just worked out that as soon as we wrapped Season 3 of Bitten, Indigo popped up. I fell in love with her. I looked her up and loved the fact that I look nothing like myself, especially since the Smallville days. With this being Supergirl, I wanted to be different. I wanted to be bad. Indigo was the perfect timing and the perfect character. But I did hear there were other characters that they were trying to get me in for.

TVLINE | Speaking of Bitten, what can you tease about the big showdown with Roman?
You can expect to see Elena in a position she’s never been in before, in terms of power and strength. You do find out a secret about Roman and [Elena’s] relation to Roman. We had some really tough scenes, and you really see Elena taking a stance you’ve never seen before.

TVLINE | Canada’s Space Channel is touting this as the final season, but Syfy conspicuously isn’t. Is there a chance it could go on?
If I did [know anything], I couldn’t say. [Laughs] It’s always fair to say that no show is ever really dead if the fans love it enough. You would always hope the door is still slightly open to do something else in a different realm or different way. We love the show and characters so much that that would be a hope for us. You never know, but the fans have created a hashtag, #HowlForMore, trying to get another season.