A cold front blew through the winter premiere of Gotham Season 2 on Monday night, as Mr. Freeze was born, Penguin found himself in a chilling situation and Jim did what he could to avoid cooling his heels in the clink.

At the Fox drama’s premiere party on Monday night, TVLine spoke with the cast about the midseason twists and what’s on tap moving forward.

DEAD SILENCE | Appearing before ADA Harvey Dent, Jim sold a story of how he had no role in whatever became of maniacal mayor Theo Galavan. Captain Barnes has his suspicions and Penguin backed Gordon’s testimony (before getting locked up), so Jim 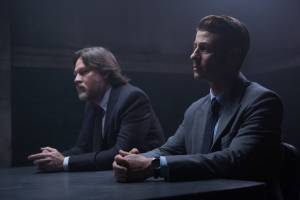 can now breathe easy, right? Wrong. “Intuitively, he understands that there is a price to be paid,” says Ben McKenzie. “He’s aware that at some point, the other shoe is going to drop.” So in the meantime, expect the GCPD’s former “boy scout” to present “a very cold, hard face” — a dichotomy in keeping with the Batman saga at large. “That’s a theme we’ve been playing with all along, how you can have this public persona and this private truth you’re hiding, and Jim is finally hiding something really explosive,” says his portrayer. “So no, he isn’t breathing easier. The devil is nipping at his heels.”

STRANGE DAYS, INDEED | Oswald copped to Galavan’s murder but made an insanity plea — which alas landed him in Arkham Asylum, where he was mercilessly mocked by truly nutty inmates and put under the oh-so-strange care of Dr. Hugo Strange (played by SVU alum BD Wong). “It’s all comeuppance for him,” says Robin Lord Taylor of his alter ego. 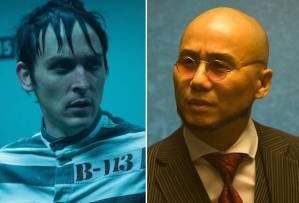 Rightly pegged for assorted Mommy issues and destined for who-knows-what kind of “treatment” by the innovative Indian Hill overlord, “It’s really difficult for [Penguin] because he’s not comfortable ceding control of his own destiny to anybody else,” says Taylor, “and now he has no recourse.” As a result, the good doctor is poised to rob Penguin of that which made him such a singularly slippery character. “[Strange] is so brilliant that he sees right through [Penguin’s insanity plea] and goes into this mode where he will strip Penguin of everything that he is. [Being rendered inert] is one of the biggest challenges Penguin has ever faced.”

THE ICEMAN COMETH | In Victor Fries (rhymes with “eyes”), played by House of Cards‘ Nathan Darrow, Gotham has a villain born not of a hunger for power or goading by his insane other self, but simply a husband looking to help his ailing wife. “I have a lot of sympathy for Victor Fries, because of the circumstances he finds himself under,” says Donal Logue, who plays GCPD detective Harvey Bullock. “He’s a loving man, his wife is dying and he’s trying to find a cure for her, and that’s what led to this.” Even so, the Gortex gloves will be off as Bullock and Gordon pursue the cool criminal. “He’s already ‘turned the corner,’ so there’s no talking him off the ledge,” says Logue. As for the TV series’ depiction of Mr. Freeze and his cool toys, Logue’s concerns were quickly eased. “The character works really well in the comic book format, but my concern was that it’d be a challenge for live-action. But the way our team pulled that off was so impressive to me, I was blown away by it.”

What did you think of Gotham‘s winter premiere?

Want more scoop on Gotham, or for any other show? Email insideline@tvline.com and your question may be answered via Matt’s Inside Line.
If you like TVLine, you'll LOVE our email news alerts! Click here to subscribe.
Loading comments...