Who let this dog in?

That’s a question you’ll ask every time a growling Rottweiler makes a surprise appearance — at a Manhattan police precinct! in a kindly professor’s study! outside the bathroom of a Chilean rectory! — during A&E’s horror-flick continuation Damien.

But it’s also a fitting query for how such a glacially paced, emotionally unengaging and utterly suspense-free series made its way onto A&E’s schedule in the first place.

Damien kicks off on the 30th birthday of the demonic little moppet from 1976’s The Omen, who’s grown up to be a globetrotting, danger-loving photojournalist. During a nasty clash between the Syrian militia and an unarmed band of squatters, Damien comes into contact with an old woman whose eyes go all haunted-glassy before she repeats The Omen‘s famous catchphrase — “It’s all for you, Damien!” — and unlocks our protagonist’s childhood memories of the governess who chipperly chanted those words before she hanged herself on his fifth birthday.

The super convenient news is that Damien’s fellow reporter pal (and sometime love interest) Kelly (Devious Maids‘ Tiffany Hines) has filmed the Syrian encounter — which ends with the old girl spouting some Biblical phrases in her native tongue, then getting knocked with a rock in the noggin. Bim bam boom, within days, Kelly has translated the woman’s cryptic followup message into English, determined that Damien’s been “baptized in her blood” and somehow accessed the decades-old travelogue of Damien’s late dad to track down a religious scholar who ties into the whole mess. One look at Damien, and the dude is hinting that he’ll become “the greatest tyrant the world has ever seen” (while simultaneously shoving a rosary into his hands and imploring him to accept Christ).

These kinds of gaps in logic and timing are as frequent and glaring as potholes on the New Jersey Turnpike in February — and Damien‘s uniformly shoddy action sequences (if you can call them that) do nothing to distract from that fact. Episode 2 makes a big deal over a would-be assassin armed with an ancient dagger that might be able to slay the Anti-Christ, but when the dude finally comes face-to-face with Damien, the subsequent fight is performed with all the energy and panache of a supermarket cashier dropping canned goods on top of your hamburger rolls. (Naturally, a Rottweiler figures prominently.) 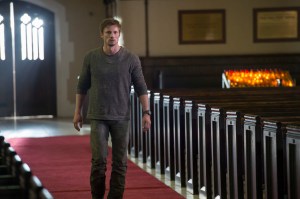 At least the show’s canine characters seem to have clear motivations, though, which is more than can be said for Damien. While America’s next top False Messiah admits early on that he’s always felt like there’s been a dark cloud hanging over his head, Merlin‘s Bradley James plays the part with such gloomy passivity that you might wonder if Satan’s long-term plan is to bore the populace to death.

Despite the fact that huge corporations, the Vatican, the U.S. government and other global powers have a vested interest in which way Damien’s wicked wind blows, the object of their obsession seems more more anxious about learning his origin story than he does in starting the countdown clock to the second coming of Jesus. Oh, sure, Damien tells a pushy priest that God is “a sadistic prick,” but that doesn’t mean he won’t take time from his schedule to show an interest in the plight of refugees and victims of war and little kids who accidentally fall on the subway tracks. And in Episode 3, when Damien shares his tale of witnessing a horrific wartime atrocity, the end result is depressing — not frightening.

The only one having any fun in this devilish affair is Barbara Hershey, playing Ann Rutledge, a lifelong follower/protector of Damien’s progress who keeps grinning lasciviously at him as though she’d like to turn the middle digit in his “666” birthmark into a 9 (if I’m not being too subtle). Hershey grins like a loopy fangirl when she shares with Damien that she has his grade-school uniform (among other artifacts) as part of a permanent display in her basement, and later, when she taunts a workplace rival with a particularly obscene accusation about his daughter, it’s such a crisp shock of villainy you can’t help but wonder if Satan chose the wrong vessel for his mission.

Hershey’s commitment to the role is impressive, but it’s not enough to follow Damien into the schlockiest circle of TV hell.

The TVLine Bottom Line: Show no sympathy for this devil — instead, cast it back into the pit from whence it came.