After leaving fans to mull a major cliffhanger for 14 weeks, Blindspot returned on Monday with an episode that confirmed one thing: Things are going to get much more confusing for Jane Doe before they get clearer.

Still reeling from a video message recorded by her past self, in which Jane learned that she is the one responsible for her own body art and memory wipe, the NBC drama’s protagonist didn’t become privy to much more information in Monday’s midseason premiere.

Instead, Jane was left to work a harrowing overseas case with the FBI team, after her newfound confidant (and former fiancé) Oscar refused to provide extra intel about her self-inflicted tats. (He did, however, finally confirm to Jane that she is indeed Taylor Shaw, though he wouldn’t go into detail about how or why she was abducted all those years ago.)

At the end of the hour, Jane was faced with an ultimatum: head to a nearby park and meet with Weller to hash out their recent kiss, or meet Oscar on the roof of a building and learn a bit more about her mysterious existence. In the end, Jane chose the clandestine rendezvous with Oscar — but what does that mean for her relationship with Kurt?

We took that question (and a few others) to series creator Martin Gero, who shared how Jane and Weller will proceed in the weeks ahead, whether a love triangle is forming now that Oscar is in the picture and how Jane will cope with the information that she’s to blame for a body full of tattoos. Read on for Gero’s insights: 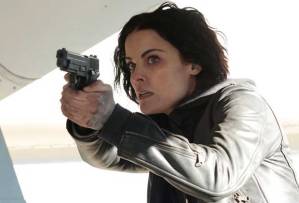 TVLINE | Given how November’s midseason finale ended, I imagine there was a lot to unpack when you got back into the writers’ room. Which storyline became the priority for the back half of the season?
To be totally honest, in the first week of the writers’ room, we started at Episode 23 and worked backwards. We knew what the tentpoles of the season were, including Episodes 10 and 11. For us, every season is like a novel in a series of books that you will hopefully read many [times]. [Laughs] It was something that we had been aiming for since the first or second week of the show. We actually had a very concrete plan of how the next 13 episodes were to track out. Originally, we assumed it would be 22 episodes, and then [NBC] added a 23rd. And there had been some stuff at the end [of Episode 22] that we thought was a little dense, and [getting an extra episode] allowed us to actually fix that problem. It was incredibly helpful to get that 23rd episode.

TVLINE | At the end of tonight’s episode, Jane has a choice between meeting Oscar on the roof or meeting Weller in the park. She goes for Oscar. Is that because she’s just too curious about Oscar to resist, or is her trust in Weller starting to fracture, as well?
It’s not necessarily her trust in Weller, but she knows that if she goes to that park, she’s going to fall for him even more. Right now, she’s trying to protect him from herself. We always say this in break-ups, but it really has nothing to do with Kurt. It has everything to do with her. She needs to figure out as much as she can from Oscar before she dials everyone else in. It does rattle her. She doesn’t know anybody that well. She doesn’t know that much about Weller or Zapata or Reed or Mayfair. It makes her second-guess herself a little bit, but more importantly, she realizes how dangerous she is to them and wants to start putting some distance between them.

TVLINE | I have to assume it will get a little awkward between Jane and Weller next week, since she blew him off.
Suuuure, sure, sure. [Laughs] It’s a delicate [balance] for them. They work together, she’s an important figure in his life. We’ve all had instances where maybe we made out with somebody we shouldn’t have, and we try to normalize that situation. It’s a lot of fun stuff. They still have an indelible bond that we’re never going to tamper with. But there are certainly going to be moments of awkwardness between them.

TVLINE | We also know that Jane and Oscar had an intense romantic history. Is a love triangle on the horizon?
It’s a very powerful thing. One of the reasons that Jane and Weller had such intense feelings for each other is because, on Jane’s side, he’s really the only tactile link to her past. And now Oscar comes along, who A) knows so much more about her and B) seems to be somebody that the past-her was madly in love with. It’s a confusing relationship for her, because she feels like he’s holding back so much from her. It’s an interesting relationship for her to wrangle emotionally.

What did you think of Monday’s midseason premiere, Blindspot fans? Grade the episode in our poll below, then hit the comments to back up your choice!