Here’s something we can probably all agree on: There are few experiences more traumatic than emerging from a body bag, naked and covered in tattoos, in the middle of Times Square.

But learning that you were the one who decided to wipe your own memory and ink your entire body? That’s a whole new level of messed-up.

That’s why, when Blindspot returns from its winter hiatus on Monday (NBC, 10/9c), Jane Doe will be reeling after discovering — via a video message from her past self — that she alone is responsible for her own tats and amnesia. 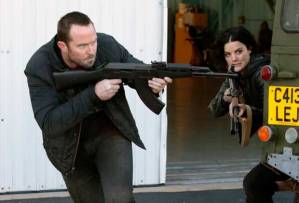 “She’s skeptical, but it’s also pretty hard and fast evidence,” series creator Martin Gero tells TVLine. “She’s desperately curious. She doesn’t immediately buy into who she was and say, ‘OK, let’s do whatever the plan was,’ but it’s something that she wants to explore for herself.”

And while we hate to be the bearers of bad news for Jane/Weller ‘shippers, Jane’s recent revelation will cause her to put the brakes on a relationship with the FBI agent, whom she kissed in November’s fall finale.

“She understands that everything she knows about herself is suddenly — pardon the pun — drawn into question,” Gero explains. “She and Weller were trying to start something good there, and now she feels, ‘Well, if I’m a Trojan horse here, am I dangerous to him? Is it dangerous for him to be close to me?’ She wants to learn everything [she can] before she dials everybody else into it.”

In fact, Jane’s relationship with the entire FBI team will shift in the wake of that unsettling video message, which leaves her “extraordinarily conflicted… almost in a selfless way,” according to Gero. “She wants to put an arm’s length between her and everybody else, but the reality is they’re her family. They’re really the only people she has… and she’s upside-down.”

Blindspot fans, what are your hopes for the second half of the season? Drop ’em in the comments below!