Everyone — “Beverly, Wil Wheaton, Adam West for some reason” — was in attendance for Sheldon’s birthday party on the 200th episode of The Big Bang Theory.

Thursday’s milestone outing celebrated “the one day a year that’s all about” Sheldon after Amy convinced her boyfriend to let her reciprocate for making her most recent birthday one she’ll never forget.

“The Celebration Experimentation” was as much about marking the occasion as it was about celebrating how the neurotic physicist impacts the lives of those he cares for most, which only became apparent after Sheldon had a panic attack brought on by an overwhelming sense of gratitude.

Though he finally got the bash he always wanted, Sheldon remained traumatized by a string of childhood parties shared with his twin sister, all of which culminated in bullying and broken promises. A heart-to-heart with Penny as he hid in the bathroom proved to be the most endearing moment in an already feel-good episode, as his longtime neighbor agreed to stay with him — “one of my favorite people” — for as long he needed, even if that meant ignoring his guests.

After being rudely interrupted by an on-the-prowl Barry Kripke (who spent the entire evening trying to score with Leonard’s mother), Sheldon returned to his party to apologize for his minor breakdown. A series of toasts in his honor followed, including Leonard’s, who referred to his best friend as more than just a roommate, but as a brother. And while Howard couldn’t quite compete with toasts by the likes of one-time frenemies Wil Wheaton and Leslie Winkle, absolutely nothing could top a surprise Skype call from Stephen Hawking, who attempted (and failed) to lead a “Happy Birthday” sing-along.

In an otherwise heavy installment, Batman icon Adam West provided some much-needed levity, playing an embellished version of himself. Whether he was ranking all of the Batmans from best (himself) to worst (“pretty boy Clooney”), advertising his availability for cons and bar mitzvahs or completely forgetting the guest of honor’s name upon his arrival (“Happy birthday, Sherman!”), the veteran actor proved as sharp as ever in what we can only hope is the first of many appearances.

What did you think of “The Celebration Experimentation”? Grade the episode in our poll, then sound off in the comments. 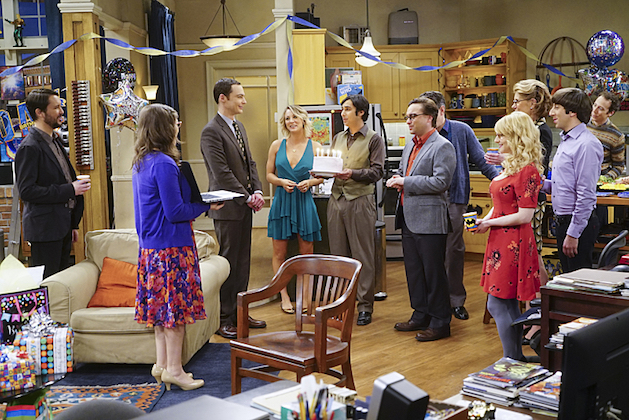