At the start of this week’s Mom, Anna Faris‘ Christy is most certainly in the “depression” stage of grief over her friend Jodi’s overdose death. “I don’t even see the point anymore,” she sighs to her Alcoholics Anonymous cohorts, explaining that she’s going to twice as many meetings as usual, but they don’t seem to help.

It’s a decidedly somber beat for a half-hour network comedy, but one that star Anna Faris says made absolute sense for her character. “For so long, Christy’s been a cheerleader to her friends and family, and she’s been really strong. After a loss like this, it feels incredibly honest for her to be like, ‘What are we actually doing?'”

Thankfully, the installment doesn’t skimp on laughs, either, mostly as a result of her mother Bonnie (Allison Janney) luring Christy and their pals Jill and Wendy on a trip to Canada to procure pilfered maple syrup for resale. But when Christy breaks down again on the way home, blaming herself for brushing off a phone call from Jodi in what turned out to be the young woman’s hour of need, there are copious tears — and an impromptu AA meeting in Jill’s van on the side of the interstate.

Below, Faris discusses her tense scenes with Christy’s own angry sponsor Marjorie, teases what’s ahead for Christy in the wake of the emotional installment, and explains the benefits of having “the most ridiculous face.” 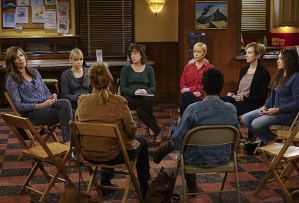 TVLINE | Christy’s close relationship with Mimi Kennedy’s Marjorie has been such a bright spot on the show. Tell me about this week’s opening scene, where Marjorie is furious that Christy let her go on her honeymoon without any knowledge of their friend’s death.
For Mimi and I, it was great to be able to have that followthrough, because with grief also comes a lot of anger. I like the idea that Christy is exploring the idea of “What is the point of sobriety?” And that probably frustrates Marjorie even more — because she’s my sponsor. It could’ve been played with her coming back from her honeymoon and saying, “It’s OK. I understand why you did that.” But as actresses we loved playing the anger, because that’s an element of a friendship. For a while, Christy is pissed, too. It’s one of those situations where it’s impossible, either way.

TVLINE | What was it like shooting that Alcoholics Anonymous meeting in Jill’s van, with your character in the driver’s seat? As a viewer, there was something really beautiful and intimate about it.
It was actually really wonderful. We shot it on a stage [without an audience]. And because there were cameras rigged up to the car, that made it tricky to get in and out. So the four of us [Jaime Pressly, Beth Hall, Janney and Faris] really sat in that car for a few hours, and that made it easier to get to a place where we could be honest. Shooting in front of a live audience is thrilling and wonderful, but when you’re attempting to get to those intimate, serious moments, an audience can be distracting. We’re a remarkably close cast — I know a lot of actors talk about that — but in our case, we’re really bonded. It felt rewarding and honest to play it, and hopefully it came across that way.

TVLINE | Will we continue to feel Jodi’s loss ripple through the rest of Season 3?
There is definitely more fallout, and it leads to more healing. I’d like to think if we have the opportunity to go more seasons, that there will always be opportunities to remind the audience and ourselves of the previous tragedies [the characters have] experienced. In Season 2, there was a lot of grieving over the death of Kevin Pollak’s character. On our show, that sort of thing is not contained to individual episodes — some of these things have a lasting impact on the characters.

TVLINE | I know the roadside AA meeting ends on a positive note, but is Christy’s sobriety still at risk because of this trauma?
When you’re an addict, there’s a degree of that risk, always. But in the final AA meeting, Christy really does come to a place where she has to find that strength, where she knows that she has to maintain her sobriety. Jodi’s loss has to mean something, and Christy will do that by continuing to be there for her family, to focus on her life and her dreams. I love that as we head toward the end of the season, Christy is accomplishing some goals she never dreamed she could. That’s exciting.

TVLINE | I have to ask about the scene where the ladies are crossing the border — and all weeping with grief — but it’s also quite funny. Is it tricky to nail that mix of comedy and tragedy?
It would be trickier if I didn’t have the most ridiculous face. Sometimes I’ll watch the show and think, “My face did that?!” It’s like I have no control over my crazy-ass expressions. [Laughs.] Really, though, it’s in the writing. There’s a release the audience feels and that we feel as characters and as actors — being able to grieve. As a performer, there’s a lot of honesty in those emotions, however you have to get there or whatever you have to tap into it. But there’s also tremendous relief in being able to do something a little ridiculous or have something ridiculous come out of the situation. It’s maybe easier than one would think — and it’s because of Chuck [Lorre] and the delicacy [of the writing staff]. In that instance [of the border crossing], the audience is laughing at the circumstances, as opposed to someone making a joke in the car.