I may not have grown up under the Common Core Standards, but I know enough math to figure out the following simple equation:

There are six weeks left of American Idol‘s Season 15. There are seven weeks left of Kelly Clarkson’s pregnancy. If Fox and 19 Entertainment spring for a luxury RV to transport the original Idol winner to and from Hollywood every Thursday between now and the April 7 finale, there is no reason whatsoever she can’t upgrade this rollercoaster of a Farewell Season with her sweetly rambling, stream-of-consciousness, heartfelt and honest critiques. (And the occasional emotionally devastating performance.)

You know you want it. We know Keith Urban wants it. In fact, if Kelly promises to move the Aussie judge to tears by belting her devastating “Piece by Piece” in his dressing room before every telecast, Keith might just give up 10 percent of his salary to pay for the aforementioned ground transportation.

In other joyous news, after a verrrrrrrrrrrrry iffy start to the show, Idol‘s Season 15 Top 10 performance telecast sprang to life like a zombie during a rare quiet and tender moment on The Walking Dead. I don’t mean that to sound gruesome and gory — but rather to imply that La’Porsha and Sonika (and to a lesser degree Olivia and MacKenzie and Dalton and Avalon) rocked hard enough and in tune enough (or at least with enough authenticity/creativity) to make me think the actual competition to find a bookend to La Clarkson might be more than an afterthought in a swirling eddy of nostalgia.

Oh and then Kelly sang and we all cried. (No, you can’t blame it on pollen or dust mites — admit that you wept, dammit!)
https://www.youtube.com/watch?v=9FHYBQxURQo 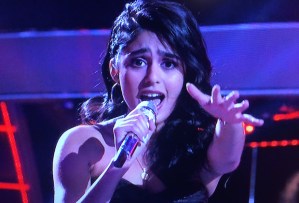 Before I discuss said successes — and the abject failures — you’ll want to know who got eliminated after America’s votes were tallied following Wednesday’s Top 14 showdown: Thomas Stringfellow, Jenn Blosil, Manny Torres and Jeneve Rose Mitchell. I’d have swapped any of ’em — yes, even Faythur McSqueakum — for Gianna or Tristan, but to paraphrase J.Lo, this exercise is all about the “fifteen-ness” (aka 2016’s most offensive f-word).

Let me offer my letter grades and reviews for the week’s performances:

Olivia Rox – Katy Perry’s “Unconditionally” — Grade: B+ | I won’t lie and call myself a big fan of this song choice — a six-syllable word as your chorus is Rated C… for Clunky — but the delicacy of Olivia’s opening verse and her rock-solid pitch won me over (even if her clench-jawed enunciation still bugs me just a bit).
https://www.youtube.com/watch?v=r_sui7dPQhg

Gianna Isabella – Beyoncé’s “Listen” — Grade: C- | With even J.Lo offering harsh criticism of her buddy Brenda K. Starr’s daughter, you know there were major problems with intonation. But it was Gianna’s phrasing — stiff as a Wall Street dude’s over-starched shirt, intuitive as a trout flopping on a scorched patch of desert — that remains her biggest downfall. I am as certain that Gianna will go home in next week’s double elimination as I am that Nicki Minaj and Mariah Carey will not celebrate Thanksgiving together come November.

Lee Jean – Bon Iver’s “Skinny Love” — Grade: C- | I’m not the only one who couldn’t make out more than a word or two of Lee’s garbled opening verse, am I? Combined with the way his immature tone tends to dissipate like Vicks in a toddler’s bedroom humidifier, I’m still a little flummoxed about how he’s an actual Top 10 finisher. #BringBackJessicaCabral
https://www.youtube.com/watch?v=WV2F7n3lY7Q

Avalon Young – Shawn Mendes’ “Stitches” — Grade: B | Avalon forgot to put hot sauce in her bag, swag — as Beyoncé would put it — before she tackled “Stitches.” Or maybe her song choice was too far away from her loosey-goosey R&B wheelhouse — without taking her any closer to a vulnerable state. As Kelly Clarkson so aptly put it, it’s been Avalon’s delivery moreso than her song choices that’ve made her look like a potential champ. If I were Avalon, I’d be looking for a devastating ballad for next week’s set: She’s got the pipes to go deep in Season 15, but she needs to learn the element of surprise to keep us interested.
https://www.youtube.com/watch?v=61GW9EcQJpQ

Dalton Rapattoni – Plain White Ts’ “Hey There, Delilah” — Grade: B- | Don’t get me wrong: I respect Dalton’s ongoing quest to reject karaoke and offer new and fresh takes on the songs he selects. But that doesn’t mean I particularly enjoyed his Backstreet Boys by way of Blink 182-ization of a simple, long-distance love story. I’ve got to give the dude the appropriate credit for singing in tune, but I felt like any sense of Delilah — or, more specifically longing and romance — was sacrificed on the altar of doing things differently. If Dalton really wants to walk in the footsteps of David Cook, he needs to remember the Season 7 champ’s biggest selling point wasn’t his ability to tinker with song structure, but rather his innate ability to infuse his lyrics with heart and authenticity.
https://www.youtube.com/watch?v=pi3fhD3Zttc

Tristan McIntosh – Dan + Shay’s “Nothin’ Like You” — Grade: D | Oh, goodness, no. This performance was like watching a newborn impala stumble directly into a den of ravenous hyenas. With neither the vocal dexterity to handle the song’s rapid-fire lyrics or the confidence and range to hit the required notes, Tristan got devoured whole by the Idol band. And alas, not even Kelly’s sweet suggestion to try out a Trisha Yearwood ditty is going to put the 15-year-old girl back together in time to salvage a shot at the finale.
https://www.youtube.com/watch?v=kWQwQTeLe4U

MacKenzie Bourg – Ed Sheeran’s “I See Fire” — Grade: B | After MacKenzie’s beautiful original tune on Wednesday, the utter expectedness of an Ed Sheeran cover could only be a letdown — and J.Lo’s advice about choosing songs that really make an impact was especially astute. To quote Paula Abdul’s greatest ballad, MacKenzie’s voice is “a whisper on a summer breeze” (in the best possible way). But without the bombast of Sonika or the camera-readiness of Dalton, he’ll need big, bold, Kris Allen-y risks to avoid an unfortunate, early exit.
https://www.youtube.com/watch?v=Zk8p8Wz90l0

La’Porsha Renae – Rihanna’s “Diamonds” — Grade: A | After her borderline embarrassing Tina Turner karaoke during the Semifinals, this was the week where La’Porsha got her groove back. Sure, “Diamonds” has become all too familiar on reality singing competitions — I’m still holding out hope she’ll tackle “Bird Set Free” or “Alive” by Sia — but like a hawk seeking out its prey in a rugged terrain, La’Porsha’s voice swooped and soared and darted and glided around Rihanna’s simple melody, turning it into something entirely other. Along with a Grammy-ready outfit — that blouse-necklace hybrid was the bomb! — and a heretofore unseen confidence, the single mom stole the show. I mean, when you have Kelly Clarkson declaring you the winner on Top 10 night — and then saying she wants to be you — you’re on your way to… if not a confetti shower, than something pretty special.
https://www.youtube.com/watch?v=rpt_kGf5LWE

Sonika Vaid – Evanescence’s “Bring Me to Life” — Grade: A- | While La’Porsha slayed by standing still at the mic, Sonika delivered her own death blow by proving her knee-high boots were made for stomping, kneeling and getting totally physically immersed in Evanescence’s operatic rock jam. Prior to this performance, Sonika’s generally looked about as bad-ass as a kitten in a “Hang in There” inspirational poster, but tonight, girlfriend roared to life — and let us see her as a viable alternative to The La’Porsha Show or the Mackenzie-Vs.-Rapattoni Rock Boy Showdown.
https://www.youtube.com/watch?v=-TX41qEqqmU

Trent Harmon – Sam Smith’s “Like I Can” — Grade: C+ | I’ve been a big fan of Trent’s all season, but to my ear, he chose entirely the wrong key for “Like I Can,” putting a tight, tinny edge to his usually muscular vibrato. Trent seems to possess way too much inner talent to become one of those vocalists who crashes and burns in the live rounds, but remember there was a time we thought Majesty Rose, Brandon Rogers, David Hernandez might have a shot at winning their respective seasons, too?
https://www.youtube.com/watch?v=dnBF8a7ST6s

OK, your turn. Vote for your fave performances in our poll below, then hit the comments and explain your decisions!