There’s something sweetly old-fashioned about the premise of ABC’s latest family comedy, The Real O’Neals, in which the an image-obsessed Catholic mom desperately attempts to hide her family’s foibles — and her teenage son’s recent coming out — from public scrutiny.

But with quick and clever references to Pretty Little Liars, Game of Thrones, Mumford and Sons and Jimmy Kimmel (just to name a few), the show also manages to be completely of the moment — and damn funny, too.

It’s that nifty juxtaposition — how many shows would attempt to feature the Virgin Mary and a shirtless cologne model in the same scene? — along with the reliable brilliance of Martha Plimpton and a hilarious, star-making turn from newcomer Noah Galvin that makes The Real O’Neals a worthy addition to ABC’s growing list of well-liked comedies with delightfully specific points of view (i.e., black-ish, The Goldbergs, Fresh Off the Boat).

The show’s pilot (airing Wednesday, March 2 at 8:30/7:30c, followed by a second installment at 9:30 — before settling into a regular Tuesday timeslot) kicks off with the family sprinting and screaming from some unseen catastrophe, a riotous moment that establishes both the tone and the pace of everything we saw in three of the episodes ABC made available to the press. 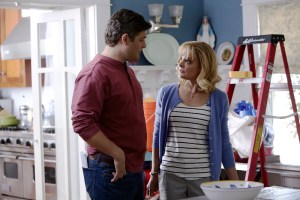 Plimpton makes brusque, conservative matriarch Eileen feel vividly real within minutes — and she’s helped tremendously by a script (by Don’t Trust the B—- and Galavant‘s Casey Johnson and David Windsor) that gives her great zingers like her horrified response to what she erroneously thinks is son Kenny’s first sexual experience: “Father Phil was here — in his collar!”

What she learns by the end of the pilot, though, is that Kenny is actually gay, her eldest boy Jimmy is anorexic and her daughter Shannon (The New Normal‘s scene-stealing Bebe Wood) has a cracked moral compass. The kids are in for a surprise, too, however, as Eileen and husband Pat (Jay R. Ferguson) are planning to get divorced (even if they want to keep it a secret from their entire community).

Ultimately, though, this is Kenny’s story — the show is loosely based on the life of gay journalist Dan Savage — and luckily for The Real O’Neals, Galvin adroitly juggles every ball that’s thrown his way. There are fantasy conversations with Jesus Christ and a disapproving Jimmy Kimmel (“Grrrl, nuh-uh,” the late-night host clucks, when Kenny considers not coming out to his girlfriend). There’s an aborted sex scene in which Kenny briefly mistakes the aforementioned girlfriend for Orlando Bloom. There are even tender moments of understanding between Kenny and his family.

This isn’t to suggest you’re in for a thick layer of sap. Eileen might publicly defend Shannon’s Catholic school science-fair project that disproves God’s existence, after all, but the kid is still grounded ’til she repents — and believes. In other words, while The Real O’Neals may be soft and gooey at its center, but it’s the hard, tart outer shell that gives it its unique flavor.

The TVLine Bottom Line: With Plimpton and Galvin serving up some of the best mother-son hilarity since Lucille and Buster Bluth, we’re lighting a candle that The Real O’Neals doesn’t wind up in ratings purgatory.