DC’s Legends of Tomorrow will get a blast from the… future, as an unexpected detour lands the time travelers in a decimated Star City, where they bump into a dulled Green Arrow (played by Arrow star Stephen Amell).

In the CW freshman’s sixth episode, “Star City 2046” (airing Thursday at 8/7c), Rip Hunter and the Waverider team touch down in the titular town some 30 years after they first embarked on their mission to stop Vandal Savage — though it takes a moment for the marauded metropolis to register as anything familiar. 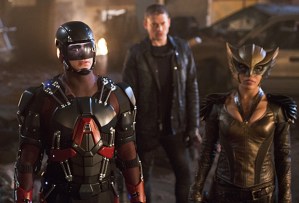 we are being fired upon by the Time Masters, so we don’t know what we’re getting into when we step out onto the street,” Brandon Routh, who first played Ray Palmer aka The Atom on Arrow, previewed during TVLine’s visit to the series’ Vancouver set. “We realize that it is Star City when we I recognize the Palmer Tech building, though it’s not quite the same. It has… a different logo” — the name SMOAK.

Surveying their most surprising rest stop, the team comes to realize that Star City “is decimated in a way that it hasn’t ever been — even though it has gone through a lot,” notes Ciara Renee, who in December passed through the town as Kendra/Hawkgirl. “There are gangs running everything, the whole place is on fire…. For our Star City locals, Sara and Ray, it’s really shocking.”

“It’s not a very happy place,” echoes Sara Lance’s portrayer, Arrow alum Caity Lotz. “It’s a Disneyland for criminals, so I don’t think Rory and Snart mind it too much.” But for Sara and Ray, there’s the soul-crushing realization that Star City met this fate in part because of the two hometown heroes’ absence. “One of the reasons this happened is because I wasn’t there to help,” Lotz says in character.

Rip does his best to assure everyone that what they are laying eyes upon is only a possible future — “It’s not a true history,” as Routh puts it —and thus they should not to get caught up in righting wrongs. But With Snart and Rory intoxicated by the pervasive and welcoming criminal element, and Sara and Ray fixated on their fallen home, that is much easier said than done.

As seen in previous episodes, 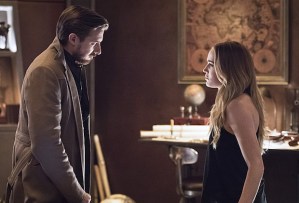 “There is always the risk of people going off and getting sucked into things that for him are not priorities,” says Arthur Darvill, who plays the disgraced Time Master. “So bringing them to a place that they’re familiar with, where they’ve got roots, is really dangerous.”

On at least one occasion, Sara and Ray’s roots will rise up to meet them, when Star City’s onetime savior, the Green Arrow aka Oliver Queen, “confronts us. Or at least what we think is him confronts us,” says Routh, alluding to another archer, Connor Hawke (played by Joseph David-Jones). What ensues is a search for their old friend, whom they had believed to be dead come 2046. And no one is prepared for what they eventually find.

In addition to sporting a beard and prosthetic arm (but not some extra pounds, as producers considered early on but later nixed), “Oliver is jaded, hard, and a little bitter. He failed the city. Everyone failed the city,” says Lotz, who was excited to reteam with Arrow‘s Amell. 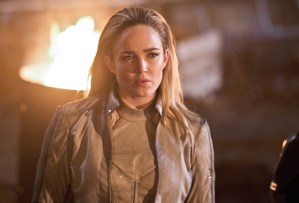 “I think we work really well off of each other. [Sara and Oliver] always have such good chemistry.” (Of her former costar’s aged portrayal, she laughs, “I felt like he was such an old man, like, ‘Get of my lawn!'”)

“It was great filming the scenes with Stephen,” adds Darvill, whose character had never before met Oliver. “They’ve created a world in which these three shows [The Flash included] exist, so it’s great when you see the links between them.”

All told, as the disparate team members wrestle with either familiar friends (and their foes) or the temptation to re-embrace the thug life, the end result is “one of the first episodes that felt like we were shooting a big movie,” Darvill raves. “There are a couple of really good fights in it, and there are some big, big set pieces that up the scale of the show. It has a very different feel than the rest of the season.”

And amid it all, there may even be the onset of the show’s first new romance.

“Sparks of a sort start to happen for Ray…,” Routh shares, cryptically adding: “All relationships are complicated!”