Heavens to Hodor, Game of Thrones sure loves messing with us.

How else to explain that this Season 6 poster, obtained exclusively by TVLine, prominently features Robb Stark’s face?

Yep, the deceased King in the North graces one of the HBO series’ new character posters. (For the others, follow @gameofthrones on Twitter.)

As you’ll recall, Ned and Catelyn Stark’s son was killed in Season 3, a victim of the infamous Red Wedding massacre… so why is his mug on promotional materials for the upcoming season?

The short answer: We don’t know, aside from the fact that the faces of several dead characters (and living ones, too) also appear in a recently released teaser trailer set in the House of Black and White’s Hall of Faces. And, unless the three-eyed raven chooses to drop some knowledge on us, we probably won’t have any better of an idea until the drama returns on April 24 at 9/8c.

We’re sure you’ve got theories, so give the poster below a good look — and click through our gallery for more spooky faces! — then hit the comments with your thoughts. 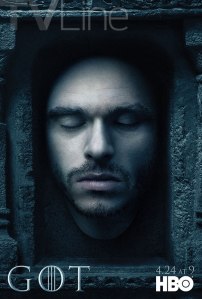