The Mysteries of Laura this Wednesday at 8/7c serves up Part 1 of its finale, capping a creatively solid sophomore run that put the NBC drama’s nascent “She’s a cop, and a mom!” days behind it.

Each week, “Diamonds” (aka the show’s “stalwart” fans) swarm social media to cheer on Debra Messing‘s titular detective as she juggles homicides with motherhood and an ever-complicated love life.

TVLine spoke with Messing about Laura‘s Season 2 evolution, the good in being “messy” and the sister act that’s about to erupt. The Emmy-winning Will & Grace alum also lets loose with the anecdote she would have shared on Sunday’s James Burrows tribute, as well as dishes on her Dirty Dancing days ahead and the prospect of dropping a live Bombshell on NBC.

TVLINE | One of the things I do, in my job, is report the ratings each day, and I’m forever impressed by how steady Laura has been in Season 2. How do you think the show has improved since its launch last season?
Oh gosh, I think it’s improved in so many ways. The murder mysteries are sophisticated and they keep you guessing up until the very end, which is really the kind of thing that keeps me excited. Also, they’ve spent a lot of time developing all the characters. The first season was really about learning about Laura, but now we care about everyone — we’re invested in them because they’re quirky and they’re accessible. I also think that the love triangle, the tension with Laura, Jake and Tony, has lit a fire under some of our viewers. The show has a little bit for everybody.

I get messages from people saying that their entire family sits down together at 8 o’clock and watches it, which is kind of amazing given that it’s about murder every week! So I’m really proud of the strides that we’ve taken creatively, and I’m really proud that our viewers are responding. As you said, they’re stalwart, they’re devoted, and we really appreciate it because we love the show that we’re doing.

TVLINE | What do you like most about Laura, and what’s the one thing that if you knew her in person would drive you crazy?
What I love about her is that she does not care an iota about what she looks like. She’s a rogue cop in that she does not dress the way that she’s supposed to. She’s not appropriate. She knows what she has to offer in terms of brain power so she knows that she can get away with wearing jeans and Led Zeppelin T-shirts and sneakers while everyone else has to keep it more “by the book.” I like that dichotomy of” lack of vanity” and “utter confidence in her capabilities.”

TVLINE | You brought up 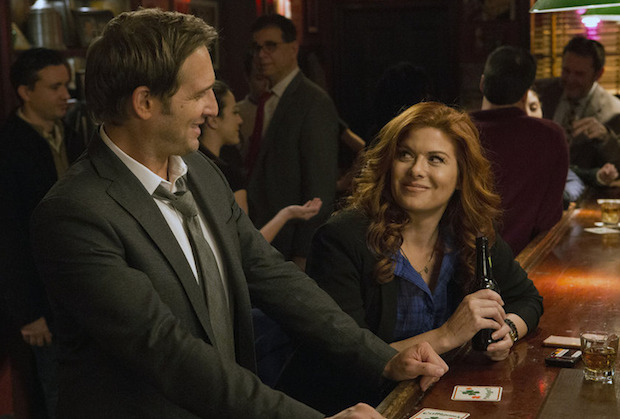 the triangle. What do you think the show is doing different with Laura and Jake that we perhaps haven’t quite seen on other shows?
The thing I really appreciate about Jake and Laura and the writing of their relationship is that it’s messy. It’s really messy. Especially when you have a procedural and the focus is mainly on solving a crime, it’s hard to also at the same time sustain a storyline that has a relationship that is realistic, but that’s what I love about it. They got a divorce, there was betrayal, there’s hurt, there’s anger, but there’s still love and there’s still desire and things are not lining up at the right time. That’s real life to me. I wouldn’t relate to it or I wouldn’t care as much if they just hated each other. They’re also great co-parents, which is another great thing to see.

TVLINE | Looking to this week’s episode, the beginning of the two-part finale: What can you say about Laura’s half-sister, Lucy (played by Debby Ryan)?
Oh, lord. It’s not a loving relationship. They have not been in each other’s lives for many, many years. Lucy has been sort of the “troubled” one….

TVLINE | The “bad egg.”
The bad egg. The one who’s always getting into trouble and doesn’t take accountability for any of her actions. And then of course there’s the complication of having a father who adores her and forgives her for a lot of that. I think it’s really interesting to see the dynamic 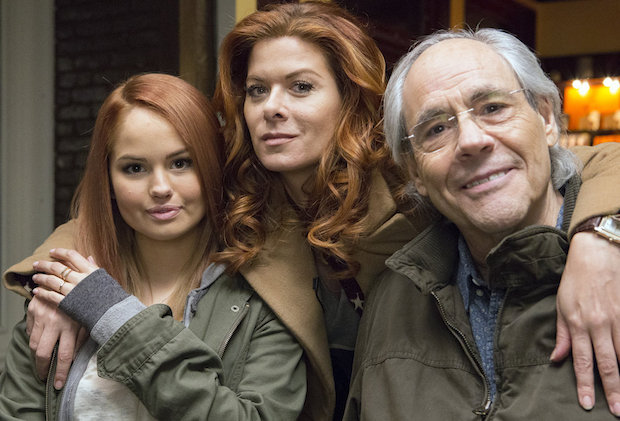 between the three of them. I love Robert Klein and I love him as Laura’s dad and this just adds a new layer to that relationship. Just to see what happens when there’s a crisis and estranged family members find themselves back in each other’s lives. Some shocking things happen over the next two episodes that I’m very, very excited about. The writers have really stepped it up this season. They always find a way to have these little, unexpected detours in the storytelling, which keeps us all on our toes.

TVLINE | I understand that it was your son’s idea to cast Debby. Does he get 10 percent? Or will an autographed selfie suffice?
Well, he’s met Debby and he’s taken a selfie with her.

TVLINE | Which is all an 11-year-old boy could want.
Yes! He said that he wants a casting director credit, but I don’t see that happening. [Laughs] The selfie with Debby Ryan sort of is payment enough.

TVLINE | When I had Debby into our offices, I had my twin sons come in to interview her and it was, needless to say, a highlight.
Yeah. I mean it’s Jessie, come on!

TVLINE | What role did New York City’s recent blizzard play in these episodes?
Well, it certainly made shooting very, very difficult. We lost a day of shooting and we had to move scenes that were supposed to be outside inside…. There was a lot of juggling on an hourly basis for several days….

TVLINE | But no foot chases through the snow?
Not that I did. That’s my main focus — I don’t want to be running in 10-degree weather and slip on the ice and then I’m out. If I’m limping around, Laura is out of commission and then it’s a whole disaster.

TVLINE | In recent years, you could see the New York City snow on-screen into March, April episodes.
It’s brutal. Working in New York during the dead of winter is not for sissies. It is very, very hard. It’s not as bad as what Leonardo DiCaprio went through [in The Revenant], but….

TVLINE | Hey, no spoilers. What can you tell me about the “life-changing” decision Jake makes next week?
Oh, gosh. I can’t tell you anything. I’m going to tell nothing about it because it is life-changing. I’m telling you, the next two episodes are really shocking and I don’t want to ruin it for anybody.

TVLINE | Is there a cliffhanger coming out of the season?
[Coyly] I would assume that that’s the case….

TVLINE | The blizzard prevented you from flying to Los Angeles for NBC’s Jimmy Burrows tribute. How did you watch it from home on Sunday?
I was in my pajamas in bed and I just was weeping through it. It’s just a very moving thing to realize that all of those people are in that room because they love him so much. He specifically made all of these people’s dreams come true. And that’s just a small percentage of the people that he’s done that for. For him to be celebrated in that way, it was really beautiful.

TVLINE | What’s one anecdote you would have been dying to share if you were there on the couch with your Will & Grace castmates?
Every year, there was a very serious, official, three-hour talk about sexual harassment. Every year, so that everyone understands what it is and what the consequences are. Sean [Hayes], being his irreverent self, once walked out into the parking lot afterwards and dropped his pants, and his underpants, and was walking around butt-naked, going, “Is this inappropriate behavior? Does this count as inappropriate behavior?” I saw his white, white, white ass hobbling around towards his car and I almost peed my pants.

TVLINE | NBC of course is really into live musicals. Do you think at some point they would maybe do Smash‘s Bombshell?
That would be awesome. You would think that that would be a no-brainer, right? But I think there’s still talk about that going to Broadway, so I think they would want to do that first.

TVLINE | Lastly, you’ve been cast on ABC’s Dirty Dancing movie, as Baby’s mother. Will they make her a more active character? Because as excited as I was by your casting, I don’t remember anything Mama Houseman did…?
Yes, they have made the character much, much meatier and a much bigger part of the storytelling. When I read it I was really, really moved and excited to play her.