This week on The CW’s Arrow, Damien Darhk’s abduction of Oliver’s super-secret son William set in motion a series of truth bombs and twists, the last of which allowed paralyzed Felicity to actually walk out on her fiance.

In the wake of the mayoral debate, Darhk confronts Oliver just as he and Felicity leave her first post-biostimulant microchip therapy session. Oliver’s phone buzzes, and on it he sees video of William, none the worse for the wear, but… you know, kidnapped. After Darhk lays out the terms for William’s release, Felicity asks the obvious question — and Oliver at long last spills his secret, that he has a son.

Oliver is quick to detail the circumstances that dictated his secret-keeping, the (unusual) ultimatum that William’s mother Samantha foisted upon him. Even so, Felicity is understandably hurt, especially given their end-of-Season 3 agreement to tell no lies. Felicity puts a pin in her full reaction, though, 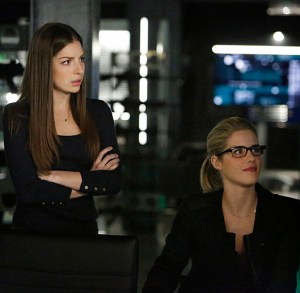 as the team tends to the situation at hand, while Oliver enlists his magically gifted friend Mari aka Vixen to help quell Darhk’s powers.

The team’s first run at Darhk and attempt to retrieve William is a bust, as Darhk is able to fend off Vixen and nearly pitches Oliver out a window. But then they get the idea that a la Mari and her necklace, Darhk also has a “totem” through which he channels his magic. Following the “ley lines” (“the Internet for magic”) running through Star City, they get a bead on Darhk’s compound in Sky Woods. The team then launches an infiltration, and it proves successful once Vixen uses all her supernatural might to snatch and then shatter Darhk’s idol. Green Arrow then KOs Darhk, as freed William, now a converted former Flash fan, looks on.

Afterward, at the loft, Oliver records a video for William to watch on his 18th birthday, in which he explains that, as much as a child should have a father, he has decided to stay far, far away so that William might have the gift of a normal childhood. Felicity enters as Oliver is finishing up, and then proceeds to say her full peace — after removing her engagement ring and placing it in front of him. She says that while Samantha confirmed the ultimatum she forced Oliver to accept, marriage is about inclusion. And not only did Oliver keep the William secret to himself, he apparently now has decided, on his own, to send the boy away.

“I don’t think you know” how to lean on your partner, she observes. “Once again, you have left me out of the decision.”

As Felicity says those impassioned words, her foot stirs, the microchip apparently kicking in. Within moments, she has risen to her feet, stood up… and proceeded to walk away, and out on, Oliver.

* I love that, for however short a scene, they covered Laurel’s own reaction to the son Oliver had with another woman while they were together. A nice touch.

* Upon discovering that it was one-handed Malcolm who actually abducted William, Thea vows to end this “song and dance” between them once and for all. Malcolm urges his daughter, to no effect, to see the “bigger picture,” but then says he’d rather she hate him and be alive than love him and be dead.

* In the island flashbacks, Oliver’s glowy tattoo made Milky-Eyed Ghost Conklin vanish. Seriously, this storyline could be its own series.

What did you think of “Taken”? How will we get from The Big Breakup to whatever is going on in this photo? And is Megalyn E.’s Vixen worthy of her own live-action show?