Each week on Supergirl, the Venn diagram of Kara’s personal and professional lives has been slooowly overlapping.

On Monday’s episode, though, those separate circles practically merge into one.

Now that James and Winn are aware of the DEO’s existence, and Maxwell Lord (a human!) is being held captive in its facilities, it’s getting much more difficult for Kara Danvers and Kara Zor-El to remain separate — and that poses quite a few problems for Supergirl.

Let’s recap the alien side of things first: When escaped Fort Rozz prisoners begin to go missing (and are later found with their heads chopped off, gross), Kara and the DEO are forced to confront the man behind the murders: Master Jailer, played by The Young and the Restless‘ Jeff Branson. A guard at Fort Rozz himself back in the day, Master Jailer is now hunting down and executing the prison’s escapees — let’s call it his twisted way of recreating the intergalactic jail on Earth, this time with his rules.

Meanwhile, on the human side, Cat Grant starts to get curious — a little too curious — about Maxwell Lord’s whereabouts. After all, when his latest cell phone model suffers a major tech glitch, why would Max send a minion to do damage control with the press instead of handling it himself? In Cat’s eyes, the only logical reason is that Max was kidnapped, and she puts her entire team (including Lucy and James) on the hunt.

Here’s where things get tricky. When James confronts Kara about Max’s whereabouts, knowing full well that he’s being held in solitary confinement at the DEO, it seems the two friends have wildly conflicting definitions of justice. Kara believes it’s all well and good to hold a human against his will, since keeping him away from the public is safer for everyone. James, meanwhile, won’t back down from the argument that Maxwell deserves to be sent through the criminal justice system properly, just like any other human being would be. Even when James gives Kara quite the lecture about basic human decency, Supergirl is super-stubborn. 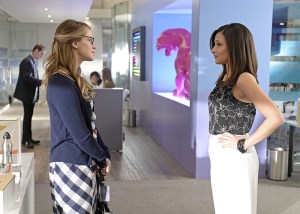 That all changes, of course, when Kara ends up abducted by Master Jailer, along with a former Fort Rozz prisoner who has since reformed himself into a well-meaning professor after coming to Earth. In the moments before the DEO arrives to save the day (because, duh), Kara chats with the professor and, after hearing his life story, realizes that holding Max prisoner might not be the best course of action, after all. Once Master Jailer is handled and the professor gets back to his regular life, Kara and Alex release Max from his cell, assuring him that if he goes to the press with any Supergirl/DEO intel, they’ll fire right back with information about all of his crimes.

So, even when her Kara Danvers life intersects with her Supergirl life a little too much, Kara escapes unscathed by the end of this week’s installment. Well… mostly. Other highlights of the hour:

* After saying a few words at Astra’s funeral, Kara finds that she can’t quite shake off her anger at Hank for killing her aunt — and Alex, the one who’s really to blame for Astra’s death, can’t stop feeling guilty. But despite Alex’s pleas to tell Kara the truth, Hank assures his DEO protégé that Kara is best left in the dark on this one. (And considering Kara ends the episode with a withering glare at Hank, along with the words, “I don’t know how to work alongside you anymore,” I’d say he’s right. Can you imagine a world in which we didn’t see the Danvers sisters sharing a pint of ice cream on the couch? Perish the thought!)

* After Kara’s multiple gaffes at work recently, she arrives at CatCo to find that Ms. Grant has hired a new assistant: Siobhan Smythe, played by Chasing Life‘s Italia Ricci, who is a real piece of work. She one-ups Kara by delivering Cat a hand-pressed cup of coffee instead of a Noonan’s latte. She openly flirts with James and Winn and has the nerve to ask Kara if she and James are friends with benefits. Oh, and she totally eavesdrops on a private conversation between James and Lucy about the DEO, which cannot possibly end well. When Kara eventually admits to Siobhan that she straight-up dislikes the girl, Siobhan comes clean about why she’s really working at CatCo: not to make friends, but to build her own Cat Grant-esque media empire someday.

* When Lucy begins investigating Maxwell Lord’s disappearance, she stumbles across the license plate number of a DEO vehicle — and when James reveals that he already knows what the DEO is, Lucy realizes her beau is much closer with Supergirl than she had initially thought. The only way for James to make things right with her? Tell her the truth about Kara being Supergirl. But when he asks Kara for permission to reveal her true identity, Kara says nothing — and we’ll interpret that as a resounding nope.

* After her ordeal with Master Jailer is finished, Kara returns to the DEO and chats with her mother’s hologram. But curiously, when Kara asks for intel about the Myriad initiative that Non put in place during Episode 13, Hologram-Alura freaks out and threatens to self-destruct should she be asked about Myriad again. So… that’s not good.

What did you think of Monday’s Supergirl? Check out a trailer for next week’s episode below — featuring Laura Vandervoort as Indigo — then hit the comments with your thoughts!