Coming off a year in which Felicity alternately mourned and felt betrayed by Oliver, Arrow‘s Emily Bett Rickards was promised “lighter, more jovial” times ahead. Season 4 indeed delivered on that, but also so much more.

With the IT whiz-turned-tech titan poised to get blindsided this Wednesday (The CW, 8/7) by the news that fiancé Oliver has a kid out there, TVLine invited Rickards to take stock of her Season 4 storylines to date, tease Felicity’s reaction to the William reveal and wrap her brain around one wild flash-forward grave theory.

TVLINE | Felicity this season has experienced domestic bliss, near-death, paralysis, the return of her long-lost father… and a to-be-broken engagement. Did you know Season 4 would serve up so much drama for her?
Oh my goodness, I could use you for recaps all the time! [Laughs] I think I did know. Although I was promised a happier season — and the writers delivered on that, since Felicity does have a more jovial and positive look at life than she did last year — I wouldn’t have been able to predict we’d pack in so many big life changes for one character in a season. It sort of asks the question, “Does everyone goes 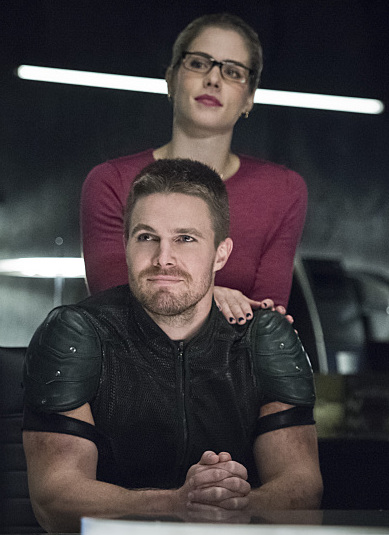 through such impactful life changes every single year?” Do you ever just get a year of, “Oh, it was such a lovely year, actually! Thank you so much for asking. I didn’t do anything, nothing happened to me”? And would we enjoy that or not?

TVLINE | Did you have any concerns about Felicity and Oliver going into the season as a happy couple?
I did. Stephen [Amell] and I wanted to keep the relationship real and grounded but also interesting to watch on TV — which is hard to do, because we’re interested in people being “tortured and not together,” or “together but something’s wrong” or “someones keeping a secret.” We do play those things, but Stephen and I really wanted to make it important that when they are together, they are happy, that it is a healthy, communicative relationship, or we show them working toward that. I feel like the real struggle in our day-to-day lives is something we sometimes ignore on television — maybe it’s not interesting to watch, but we can only hope that it is. Although then we just stick a dagger in it and everyone’s happy again. Yea!

TVLINE | Donna (played by Charlotte Ross) has had a greater presence this season. What avenues has that opened up for you as an actress?
I mean, besides just working with Charlotte, because we love to work together, it’s so rewarding as a character to have your mother in a scene with you, to have your mother in your life. Because no matter how old you are, you always feel like a child around your parents. 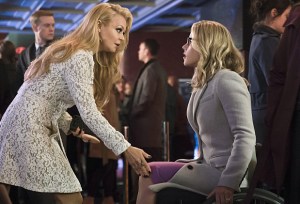 Sometimes you’re giving your mom advice or something like that, but still, they almost have this magical power they can put on you and then you just feel like a “young human” again. It is so awesome for me as an actor and for Felicity to have her mother around, because you get to play different parts. You even get to use different parts of your vocal range, because you talk to your mother so differently than you talk to anybody else. That’s something mothers can always hold onto, even if their kids grow up.

TVLINE | Curtis (Echo Kellum) is also new to the mix this season. What do you think he brings out in Felicity?
First of all, he brings out all of my laughs. I adore him. As opposed to being attracted to each other in an opposites sense, they get to vibe on the same level, which I think is so rewarding for both of them, because they don’t get that from a  lot of people. I like how that can snap each other out of it when they’re not focused, to keep each other on task. And then when they’re too focused, they really care about each other. That is a relationship I’m hoping we can explore a lot more.

TVLINE | You had a chance to act opposite yourself this season. Is it trippy to see the end product on-screen?
It was so much fun to do, and exhausting to do, and rewarding to do…. I couldn’t have asked for anything more, I felt so fulfilled. But seeing it and wanting to be able to do it again, it’s not so much “trippy” 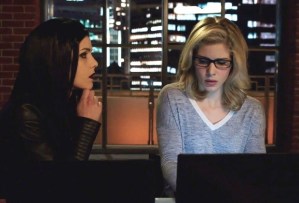 but being like, “Oh, that’s how that works.” Ali Liebert (Bomb Girls) was my scene partner [alternating as Goth or regular Felicity], and it was so awesome to work a character with another actor I’ve trained with before, to have these beautiful sense of, “We’re molding together these scenes.” Ali’s such an amazing actor, so it was a treat. It was like I was throwing confetti in the air every time we yelled “cut,” it was so much fun.

TVLINE | It may not be for the long-term, it seems, but how did you prepare for the paralysis storyline? [Showrunner] Wendy [Mericle] told me you were excited for the challenge.
I was excited for the challenge, I was excited for change. I’m so expressive with my body, as an actor, as Felicity, that I was worried about getting in a chair and then not being able to use her entire body. But I talked to a woman who had become paralyzed in her 20s in a snowboarding accident, and that conversation was really eye-opening. She was very generous and giving with all of her experience and information. It made me upset that we didn’t have more time to show what [the acclimation] would be like, because that’s not what our show is about. It made me feel apologetic [because] this takes over your life and we were only able to show that in a minute. I liked that Felicity’s mindset — and obviously it would have taken a lot more time [to accept], I cannot stress that enough — was, “This is what my life is now and I’m still going to my goals and dreams come true.” I was proud of her for that, and it was something they promised at the beginning of this season, that Felicity would be lighter, that she is going to be headed in that direction but nothing is going to stop her.

TVLINE | What can you tease about Felicity’s reaction to the news about Oliver’s son William?
I feel like we saw her in the crossover episode react in a certain way, and we’ll see seams of that play into this reality, this timeline that we watch — which is interesting to think about, that we’re not watching all of the timelines all the time and yet they’re happeninnnng! [Laughs] I think we all know Felicity’s heart pretty well, and we know that she tries to be as honest as possible all of the time. I feel like that’s something she respect in her friends and in the people she surrounds herself with, and with that said, when she finds out this information that she would hope to have known, we can probably predict how she is going to react! 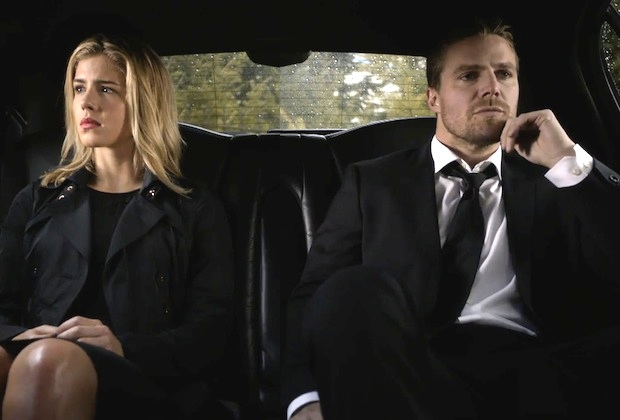 TVLINE | How did you find out that Felicity would not be wearing her engagement ring in the flash forward, and what was your reaction?
It literally said in the script, “NO RING,” and I was like, “OK….” Filming that scene, we knew virtually nothing about what it really was about. [Ed. Note: At the time, the identity of the person in the grave was not set in stone.] Your character knows what’s going on but as an actor you don’t, so it was about trying to get as much information from the writers and potentially where this story is headed…. Everything’s going to make sense in the end, but at the same time, I found filming that eighth of a page to be very… I couldn’t stress myself out about it, but I found it difficult. Because I like to know what the authenticity is.

TVLINE | You almost have to play it down the middle….
Yeah, or play both extremes. I think I’m always going to feel like, “Oh, that was a cheat, because if you had known this….” But as for having no ring on, that was a huge question of, “Well, what is their relationship and why are in this car together?” Obviously they’ve stayed in contact without this ring on, so what does that mean for them? What is the weight between them? Is it their relationship, is it the situation they just went through? What are they talking about in this scene?” Because the scene wasn’t about the ring. And yet the ring fills this underlying space in the middle between them.

TVLINE | Have you seen the fan theory that Felicity is in the grave and that Oliver is hallucinating her there in the limo?
No! Oh my God, how cool is that?! Like, not “cool,” but no, I hadn’t even thought of that…. Who do you think is in the grave?