If this week’s episode of The Walking Dead is collecting dust on your DVR, or if it has yet to air in your time zone, steer clear of this next story.

The Walking Dead on Sunday threw the ultimate curveball at viewers when, in the episode’s closing minutes, Rick and Michonne suddenly and without warning took their platonic relationship to the next level.

First there was a seemingly innocent hand-clasp. Then an exchange of googly eyes. Then a kiss. Then some barely-audible pre-carnal cooing. Then another kiss. And then… the sex.

Below, showrunner Scott M. Gimple reveals when and why he made the decision to go there with Rick and Michonne, the surprising role dearly departed Jessie played in the duo’s years-in-the-making hookup and the “very good deal” of conversation that went into designing that provocative morning-after nude “tableau.”

TVLINE | How long had you been planning to hook up Rick and Michonne romantically?
It was a story I was interested in pursuing for a long time, even before I was running the show. Then, starting Season 4, my overall goal was to bring them to a unique place of respect and intimacy, possibly/probably leading to romance.

TVLINE | Why was now the right time to play this romantic beat between them?
At this point in the story, the characters have fought their battles and won their home, their safety. Over the past weeks, they’ve found a certain peace. And that’s when these two characters could realize what they had.

TVLINE | Any concern about it following so closely on the heels of Jessie’s death? Or was that sort of the point?
Yes and no. Weeks and weeks have passed, so the events of the last episode have been processed for the characters for a while. The Jessie relationship was critical for Rick in opening up that side of himself, for having a larger personal world, to have something more than survival. Jessie’s impact on Rick was making him see that he is a whole person and he can live a full emotional life, despite the state of the world, despite the history he’s had. 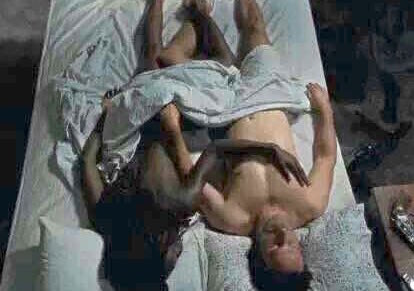 TVLINE | What was Andrew and Danai’s reaction to the story?
Without going into the exactitudes of it — as my memory is truly shot from working several different aspects of S6 and S7 simultaneously right now — both of them supported the story; they felt that it made sense for the characters.

TVLINE | How much time and attention went into the placement of their arms and legs during that opening morning-after shot?
A very good deal, and I appreciate you asking. There were a lot of conversations with [episode director] Kari Skogland [and episode writers] Angela Kang and Corey Reed. We wanted that tableau, in many ways, to represent their relationship — the balance of it, who they are to one another.