Wait — did that just happen?!?

In the aftermath of its kickass midseason premiere, The Walking Dead packed arguably an even bigger emotional punch this week by burying a beloved character — well, beloved by me, anyway — and hooking up a twosome that some of you have been shipping for ages.

So, who found themselves pushing up daisies, and who ended the episode by knocking boots? Read on…

‘TODAY’S THE DAY’ | Picking up a few weeks after the bloodbath of “No Way Out,” “The Next World” opened with a glimpse of what life was like in Alexandria now that the dust had settled. Rick, Michonne, Carl and Judith were playing house like an adorable post-apocalyptic Brady Bunch. (You know things are going pretty well when the big issue du jour is a toothpaste shortage.) Maggie was encouraging Enid not to hide away from the world. “Maybe,” suggested Glenn’s wife, “there are better places for you to go than nowhere.” (Yeah, “away” comes to mind.) And just as Daryl was heading out on a supply run with Rick, Eugene and Denise were adding items to the, for lack of a better term, grocery list. Eugene was hoping for sorghum, “a criminally underrated grain”; Denise, soda to give Tara as a surprise before her imminent two-week run with Heath.

On the road, an optimistic Rick was sure that this was the day that he and Daryl were going to find food, people… heck, maybe even a four-leaf clover and a unicorn, too. (Just kidding about those last ones.) It was the law of averages, Rick theorized. And lo and behold, the duo soon happened upon a delivery truck full of, among other things, sorghum. (Aw… there was even that pasta maker that Mrs. Niedermeyer had wanted ages ago!) Better yet, the truck started right up. Could this day get any more awesome?!? In fact, it could. Next, the guys found a vending machine full of candy and soda! Unfortunately, their luck didn’t hold out…

‘WE GOTTA STICK TOGETHER, RIGHT?’ | Before Rick and Daryl could say “Nobody better lay a finger on my Butterfinger,” they made the acquaintance of crafty Jesus (Luck alum Tom Payne), who insisted that he hadn’t been trying to tackle them, he was, as one might believably be, “just running from the dead.” (Mm-hmm.) He also said that he didn’t have a camp. (Mm-hmm.) And he couldn’t stick around to answer Rick’s recruitment questions, because, you know, walkers. (Mm-hmm.) In Daryl’s estimation, it was for the best that the guy had run off. And in no time, the born-again cynic’s suspicion was borne out: Jesus had stolen the keys to the delivery truck, distracted Rick and Daryl with firecrackers, and made off with the goods — even the damn vending machine that was chained to the vehicle’s rear!

Giving chase on foot (post-apocalyptic cardio!), Rick and Daryl eventually found Jesus changing a flat, overpowered him and left him mercifully loosely tied up on the side of the road. “So long, ya prick!” said Daryl. Only it actually wasn’t so long before he and Rick were again doing battle with Jesus over their smorgasbord on wheels. The slippery character somehow had untied himself so quickly that he’d managed to jump on top of the delivery truck before Rick and Daryl had driven off. Once he was discovered, another round of Catch Me If You Can ensued, this one ending with Jesus saving Daryl from a walker, Daryl knocking Jesus out and the truck being lost to the bottom of a lake. “Law of averages,” Daryl grumbled to Rick, “is s—, man.”

‘WHY THE SHOVEL?’ | Back in Alexandria, Michonne spotted Spencer walking into the woods with a shovel and, curious to say the least (and worried, the most), followed. When she caught up with him, he reluctantly explained that he needed to take care of something before he could even think about having the kind of life that she did back in their community. And no, she couldn’t help him.

Meanwhile, Carl and Enid’s play date in the woods — already a bust, since Debbie Downer didn’t want to be there — went even further south when they happened upon a walker, and instead of kill it, Carl led it away as if he knew the 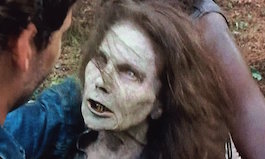 person it had been. Why? Who was it? Seconds after Michonne spotted Carl in the distance, we found out: The walker was Deanna!

Spencer had seen his mother — or what she’d become — the night that Alexandria fell, he told Michonne. And, after putting a knife in Deanna’s head as tenderly as anyone could, he added, “So that’s why I was out here.” And that was why he had the shovel — to bury her. Once his heartbreaking task was completed, Michonne assured him that he still had family. (And, given the way she sweetly carved Deanna’s initial in the tree overlooking her grave, could he really argue that he didn’t?)

‘I’M FINALLY LISTENING’ | Although Daryl had said that he wanted to leave an unconscious Jesus behind, or at best leave him safely napping in a tree, he and Rick drove him back with them to Alexandria. Rick was sure that Daryl wouldn’t really have dumped the supply thief in a tree. For one thing, he had never pulled a weapon on them. For another, he had saved Daryl’s bacon (if not Eugene’s sorghum). Finally, Rick reminded his buddy that, when they’d first arrived in Alexandria, he had argued passionately in favor of bringing outsiders in — and finally, Rick was on board!

Back in town, Carl stopped Michonne from scolding him too harshly for not putting down Deanna by suggesting that the person who did so “should be someone who loved her, someone who’s family” and adding, “I’d do it for you.” (Yeah, it’s gonna be a while before I can dislodge the lump that this scene left in my throat.)

‘IT’S GOOD TO BE HOME’ | Shortly thereafter, Rick and Michonne were unwinding on the couch like an old married couple, not talking about the crazy day that they’d both had, watching Judith practice crawling in her sleep on the baby monitor, and laughing that he’d brought back mints in place of toothpaste. Then, suddenly, he wasn’t patting her hand, he was holding it. She gave him a “What’s happening here?” look, and the next thing we knew, they were kissing! And the next thing we knew after that — I still hadn’t picked my jaw up off the floor, it all happened so fast! — they’d already done the deed!

Later that night, the newly minted lovers were awakened — in their bedroom, no less! — by Jesus. (Apparently, neither ropes nor Alexandria’s holding cell present him with any challenge whatsoever.) “We should talk,” he said. And there, we left it!

So, were you surprised that the show finally went there with Rick and Michonne? First impression of Jesus — thumbs up or down? Hit the comments!