Colleagues who work in glass offices shouldn’t be trying to physically re-enact the 17-minute edit of Donna Summer’s “Love to Love You Baby” (without even bothering to close the door/shut the blinds). But in the case of The Good Wife‘s Alicia Florrick and Jason Crouse, the skirt-hiking, zipper-dropping nastiness was so profoundly overdue, we’re going with a “not guilty” verdict — and kinda hoping they’ll give us an encore before the CBS drama wraps its seven-season run in May.

This week’s episode was titled “Targets” — and I think we know Jason and Alicia hit theirs.

Sorry, that was as “Dirrty” as an underrated Xtina jam, but it’s not like Julianna Margulies didn’t already take it there with her delivery of this juicy afternoon-after tidbit: “You want things simple. I want things simple, too. So here it is: I want you again. Don’t you want it?”

But the bawitdaba da bang a dang diggy diggy was hardly the only news out of this week’s episode. Military tribunals! FBI investigations! Elsbeth Tascioni, her ex-hubby and a chihuahua! Let’s recap! 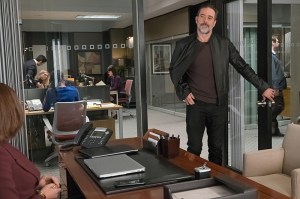 OFFICE INTRIGUE | David Lee (and Cary) get a little suspicious when a trade magazine doing an article on Lockhart-Agos-Lee wants photos of the female equity partners alongside junior partner Alicia. David hires Jason to investigate. Diane figures out Jason is investigating. Everyone is as paranoid as if it’s early Season 5. And Jason seems as baffled as he is amused by it all.

When Alicia returns from a secret assignment — verrrry late at night — he probes her for intel about Diane and her long-ago thought about an all-female firm, but it turns into an altogether different kind of probe when Alicia talks about her need for tequila, Jason asks her to do some breathing exercises, and winds up with Alicia’s face in his hands, kissing with a frenzied lust that had me thinking, “GUYS! SHUT THE DOOR! CLOSE THE BLINDS!” OK, sure, security had turned off the Lockhart-Agos-Lee lights, but nowadays it doesn’t take much to switch off motion-sensor lights (as I learned in a bathroom in West Elm about a week ago)!

The day after, Jason lets Alicia’s call go to voicemail — and it makes me worried that maybe their canoodling was part of his investigative plan. But it turns out he’s just wary of her still being married to the Illinois governor. (Fair enough!) She tells him Peter is fine if she’s got some side action, but Jason’s not so sure. Which leads to the aforementioned quote about “Do you want it?” And Jason’s naughty grin is all the answer we need. 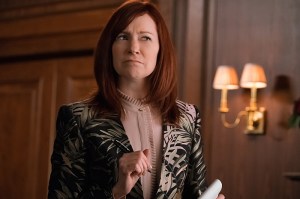 POLITICAL INTRIGUE | Eli hires Elsbeth to help Peter figure out why he needs a lawyer in the first place. They dance around the idea that it might have something to do with Peter trying to rig Alicia’s State’s Attorney election, but a conversation between Elsbeth and Marissa about dairy farming, purse making and Israel prompts Elsbeth to drop the case — and pass it to her ex-husband Michael. (The horrified way Peter and Eli stare at the chihuahua in Michael’s hands during their meeting, you’d have thunk it was a giant hunk of kryptonite!) Through some exceptional mind-game playing, Eli and Michael get Elsbeth to meet in person with the client who presents a conflict of interest: And it turns out to be a powerful Jewish businessman who found a job for Marissa at the aforementioned dairy farm and who was a major contributor to Peter’s campaign. “They’re coming after Peter and one of his donors,” gasps Eli. (Side note: Is it just me, or does Peter’s presence in this arc almost feel like an afterthought?)

MILITARY INTRIGUE | The case of the week is one of those fascinating deep dives into the law at which showrunners Robert and Michelle King have excelled for years. Alicia and a conservative attorney join a panel of military and government experts in a top-secret tribunal to decide whether or not the U.S. can legally justify the killing of an American citizen who’s become a recruiter for ISIS — without every pulling a trigger or overtly inciting his followers to violence. Alicia makes the winning case for execution — the man is providing the bodies with which ISIS has carried out so many violent bombings — but gets into hot water when there’s a leak in the confidential hearings traced back to her. 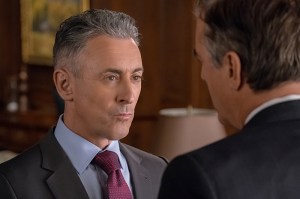 Which leads us back to the NSA wire-tap boys… yep, not only are they still recording Alicia’s calls, but they can grab audio from up to 20 feet away from her cellular device. Turns out the intel about the ISIS case got leaked via someone within the NSA. One of our jaunty wire-tap fellas gets carted off for questioning, and you have to wonder if — in clearing Alicia of any wrongdoing — she might learn about the whens/whys/hows of the wiretap she’s been subjected to now for a very long time.

Your turn. What did you think of this week’s The Good Wife? Was the Alicia-Jason hookup as hot as you’d hoped? Do you or don’t you want more? And how bad will this investigation of Peter become? Share your thoughts in the comments!