Even with “the funny one” stuck overseas, the chemistry between the stars of Friends was as potent as a cup of Central Perk coffee during NBC’s Must-See TV: An All-Star Tribute to James Burrows.

Ushered in by Matthew Perry via video, Jennifer Aniston, Courteney Cox, Lisa Kudrow, Matt LeBlanc and David Schwimmer re-assembled Sunday — on a slightly different couch than we’re used to seeing them — to honor the legendary Burrows, who recently directed his 1,000th episode of television.

“We would do anything for Jim Burrows,” Aniston began. “He gave us the opportunity of a lifetime, and probably the best 10 years of our acting careers that we will forever remember. We experienced friendship, heartbreaks, babies, everything together. And we had a wonderful experience with the world loving us, as well. They really connected with us.”

Speaking to the cast’s early chemistry, Aniston continued, “From the beginning, we just wanted to hang out with each other. … We really just fell in love and adored each other instantly.”

In addition to soliciting the stars’ praises for the man of the hour, host Andy Cohen also prodded them for behind-the-scenes secrets. Here are a few things we learned:

* According to Kudrow, Burrows gave his poker table to the cast as a bonding exercise; this inspired the infamous poker episode “The One With All the Poker,” which Burrows also directed.

* During the first season, the cast would get together to watch each episode together — keep in mind, this was decades before live-tweeting became a thing — and would give each other notes, or as they now consider them, “suggestions.”

* The Friends skirted Cohen’s promo-worthy question about whether they had to promise — in writing — not to sleep with one another. “I was not asked to sign anything,” Kudrow said with a laugh.

* “The three girls, we had lunch together every day for 10 years,” Cox said, calling their meal of choice “a Jennifer Salad.” Aniston tried to shrug off any notion that she makes salad better than others, but Cox insisted, “She has a way with it.”

* LeBlanc’s favorite Joey moment is from “The One With George Stephanopoulos,” specifically the beat where Joey pretends a puck is coming at his face, much to the annoyance of Ross, who just had a puck hit him in the face. LeBlanc gives all the credit to Burrows for coming up with the bit on the spot.

* One of Cox’s favorite episodes is “The One With the Blackout,” because she loved the image of Ross running around the balcony with a cat on his back. Schwimmer recalls Burrow encouraging him to “just keep doing it.”

* Aniston has a special love for the flashbacks to “Fat Monica, Rachel pre-nosejob and Ross with his afro.”

* Burrows often related characters from his shows to one another; he told Kudrow that Phoebe was his new Reverend Jim (Christopher Lloyd’s character on Taxi), and as LeBlanc recalls, Burrows told him, “You’re Danza.”

Your thoughts on the Friends reunion (of sorts)? Favorite moments from the rest of the night? Drop ’em all in a comment below. 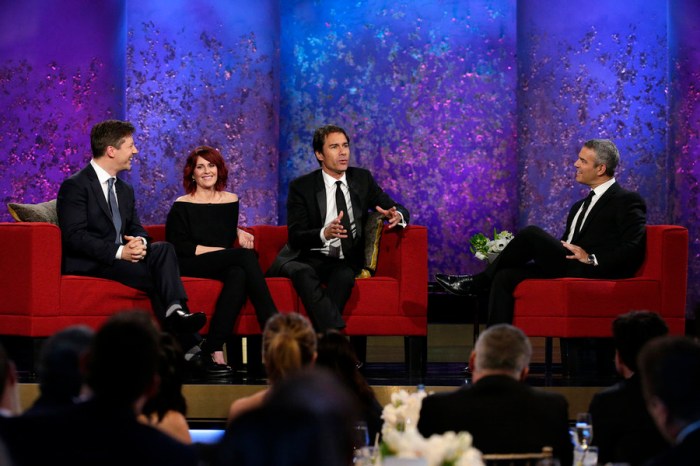