It took six seasons, but Lady Mary Crawley was finally served a fat slice of humble pie on Sunday’s penultimate Downton Abbey — and I have to admit, I kind of loved watching her choke on it.

The trouble began when Edith announced that Bertie — still waiting on pins and needles for an answer to his proposal — had lost his cousin, and that he was the next in line to become the Marquess of Hexham. “That’s absurd!” Mary thought aloud. “If Bertie’s a marquess, then…” Robert cut her off, proudly proclaiming, “Edith would out-rank us all!”

No amount of words would do justice to the stank-face Mary made while processing this news, so I’m just going to let it speak for itself:

If that wasn’t your first clue that lunch between Bertie, Mary, Edith and Tom would end in disaster, you wouldn’t make a very good detective. As if she were discussing a known fact, like the sky being blue or Carson being an emotionally abusive husband, Mary told Bertie how much she admired him for accepting “who [Marigold] really is,” forcing Edith to reveal the truth about her daughter.

Mary attempted to play the “I thought he already knew” card, but after everything she’s put her sister through over the years, her half-assed attempts were futile. Time for pie!

Tom gave Mary her first nibble: “You ruined Edith’s life today. How many lives are you going to wreck just to smother your own misery? … You’re a coward, Mary. Just like all bullies, you’re a coward.” It was the emotional equivalent of a punch to the gut, albeit a deserved one. Tom was the last person Mary ever expected to come at her, but considering his penchant for blunt honesty — coupled with the fact that, somehow, he seems to know her better than most others — maybe she should have seen this coming.

But like the true gentleman he is, Tom saved the bulk of the slice for Edith, who tore into her sister with one of the most painful, honest and long-overdue speeches in Downton history:

Just shut up! … Who do you think you’re talking to? Mama? Your maid? I know you. I know you to be a nasty, jealous, scheming bitch. … You’re a bitch! And not content with ruining your own life, you’re determined to ruin mine. … Don’t demean yourself by trying to justify your venom. Just go. … And you’re wrong, you know, as you so often are. Henry’s perfect for you. You’re just too stupid and stuck-up to see it. Still, at least he’s gotten away from you, which is something to give thanks for, I suppose.

–
Boom. If Tom’s speech was a gut-punch, Edith’s was a full-on curb stomp — and it was exactly what Mary needed to hear. She and Edith eventually made peace, but only because, as Edith says, their “shared memories will mean more than [their] mutual dislike” someday. In other words, they might hate each other, but they’re stuck together for life, so why not try to make the best of it? 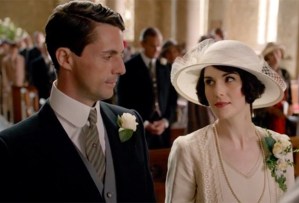 ‘A NEW COUPLE IN A NEW WORLD’ | Because the laws of Downton Abbey strictly state that Mary must always come out on top in spite of everything, the episode ended with her wedding to Henry — a subtle affair, far less grand than her first wedding to Matthew.

Putting Mary’s transgressions aside for a moment, I confess that I broke down like a baby when she and Isobel spoke at Matthew’s grave. First came Mary’s words for her late husband: “The truth is, I love [Henry]. I believe we are right together, but I so very much want to feel that you’re happy for me, as I’d happy for you, my darling. Remember: However much I love him, I will always love you.” Then, Isobel’s words to Mary: “I don’t know if you have his forgiveness, but you don’t need to ask for mine. I’m delighted.” (Great, now I’m crying again.) 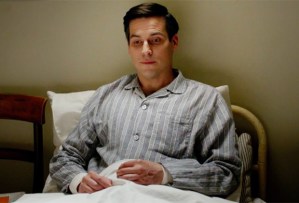 ‘HOW SAD, HOW VERY SAD’ | Unfortunately, not every development was a pleasant one. As I, and many readers, have been cautiously predicting for weeks, Thomas finally attempted to take his own life Sunday; if Baxter hadn’t connected the dots and demanded entrance to Thomas’ room, he might have died right there in the hauntingly red waters of his bath tub. The suicide attempt affected everyone differently; Mary, naturally, tried to place the blame on Robert, a notion he called “rather below the belt, even for [her].” Though Thomas’ job at Downton is safe (for now), I’m curious about his future as a character. Will he bounce back from this a stronger man? Will he finally find the sense of belonging he’s always wanted? (And am I the only one who half-chuckled when Carson discreetly informed Robert of the situation, only for him to scream, “Thomas has cut his wrists? God in heaven!” for all the family to hear?)

* “I always knew that women were ruthless, but I didn’t think I’d find the proof in my own wife,” Carson said after Mrs. Hughes agreed the Crawleys should help repair the tattered reputation of Mrs. Patmore’s bed and breakfast. She laughed off his comment with a kiss, telling him, “You’re such an old curmudgeon … [but] you’re my curmudgeon.” Is it just me, or has Carson been the worst ever since he and Mrs. Hughes tied the knot? I had higher hopes for those two.

* This was a beautiful line to Mary from the Dowager Countess, one which almost changed the way I see Edith’s wicked older sister: “You are the only woman I know who likes to think herself cold and selfish and grand. … Make peace with your sister, then make peace with yourself.”

* I’m not sure which would make a better spinoff: Spratt’s secret life as Cassandra Jones, or Molesley’s life at the school? (Just kidding, definitely Spratt. As Edith would say, it’d be “bananas.”)

Your thoughts on this week’s crazy-awesome Downton? Hopes for next week’s (gasp) series finale? Drop ’em in a comment below.