The following contains spoilers from this Friday’s Hawaii Five-0.

This week on CBS’ Hawaii Five-0, a Valentine’s Day mystery was solved — as in, why did San Francisco PD inspector Abby Dunn hightail it out of her romantic hotel room rendezvous with Chin and later lie to him about returning to the mainland?

As revealed at the close of Friday’s episode, as Danny was questioned by the FBI about Five-0 tactics, Abby was on the other side of the one-way glass observing, having been planted as a mole to investigate McGarrett’s team.

Here, Julie Benz talks about keeping Abby’s secret (even from her H50 castmates!), who’s out to sink Five-0 and what the twist means for “Chibby” as a couple.

TVLINE | What did Julie Benz 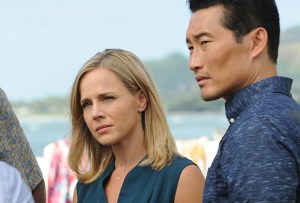 know and when did she know it?
They came and told me early on, but I wasn’t allowed to even share it with the rest of the cast. I had to keep a big secret, and I felt terrible about that. [Laughs] [The secrecy was] because they wanted to incorporate shots of me watching Chin and have the audience interpret it in the moment as “Abby’s falling in love with him,” but in hindsight as “She’s observing him.” So if you go back and watch the previous episodes, you’ll see some weird shots where I’m just staring at him.

TVLINE | When your casting was first announced, as a “possible love interest for Chin,” did you almost want to scream, “Oh, but there’s so much more!”?
I didn’t know at that point. It wasn’t until after my first three episodes that they came and told me. I was excited, because every character on the show has some sort of secret, so I was wondering, “What is Abby’s secret going to be? What’s her thing?”

TVLINE | Why did her crisis of conscience come to a boil on Valentine’s Day?
Because I think she’s really falling in love 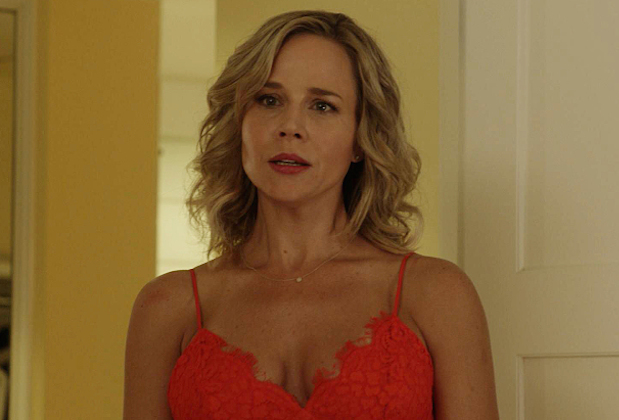 with Chin. What started off as her investigating and observing and pretty much using whatever it takes to get close, all of a sudden she started developing feelings for him. And then she realizes her own moral ground was broken.

TVLINE | What sort of inner conflict will we see her deal with?
She’s working for federal prosecutor Robert Coughlin (played by Ingo Rademacher), who has his own personal agenda as to why he wants to take down Five-0. When his agenda comes out, it really puts Abby in a bind because she doesn’t like to be manipulated. She doesn’t want to be a part of someone’s personal vendetta. And she really does feel that what Five-0 stands for, what they’re doing, is great, and she has not observed any abuse of power. She’s put in a really tough position where she has to decide between doing her job and following her heart.

TVLINE | Will it be a few weeks at least before Chin finds out? Make the audience sweat it out a bit?
Yeah, they’ll have to sweat it out. That’s the sad part — the fans are going to hate Abby for a while! [Laughs] It was hard to get them to love her, and now that they do they’re going to be destroyed. [Laughs]

What did you think of Hawaii Five-0‘s Abby twist?