For as long as they stay in the running, the Amazing Race team of Erin Robinson and Joslyn Davis — hosts of the digital entertainment news franchise Clevver — are sharing with TVLine behind-the-scenes secrets from each week’s escapade.

BAYWATCH MOMENT |​ Who knew being on The Amazing Race would make my Baywatch dreams a reality?! OK, to be fair, I never knew I had Baywatch dreams, but that’s an unnecessary detail. When teams arrived at the Roadblock at Totumo, the mud volcano in Cartagena, our instructions told us we had to climb into the volcano wearing either a swimsuit or the equivalent. Translation: 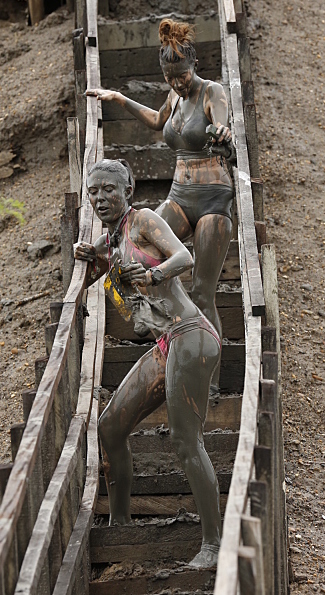 wear your bikini or wear your underwear, the choice is yours (or at least that’s how I interpreted it). After the first leg of the race, I was one step away from ditching my bikini and thank God I didn’t because my mom wouldn’t have enjoyed seeing me in panties on TV. I was pretty laser-focused on my Roadblock, but I definitely took a few milliseconds to check my fellow racers out, and seeing everyone covered in mud, slipping and sliding all over the place and just trying to maintain a standing position, was next-level hilarious! I clearly had way too much fun on this Roadblock — being a “hot mess” has never been so fabulous. And… this may be TMI but I had mud coming out of every part of my body for days and days and days. It was disgusting but I chose to believe it was like a full-body mud masque. Fun fact: A bunch of the racers and I have discussed collecting our mud-covered photos and making a calendar out of them. Move over Sports Illustrated? Too far? Maybe.

OMPHALOPHOBIA ALERT | Mexico City was freezing and I lost my gloves in that scary cave, so it was like a summer Christmas morning once we found out we were going to a warmer climate in C​olombia!​ Something that we didn’t anticipate, though, was that with the heat in C​olombia a​lso came the humidity, and then the heat rashes. I am deathly afraid of three things in life: tight spaces, bellybuttons and fish. Shout-out to CBS for unknowingly causing my omphalophobia (fear of bellybuttons) to kick in during Leg 2! I had a near panic attack when I looked down to see my own bellybutton covered in a heat rash — double whammy. Also, after running approximately 10 miles during Leg 2, Joslyn and I both had burns on our backs from our 25-lb. backpacks rubbing us raw. These are the small honor badges of Amazing Race that most people at home don’t get to see!

THAT AIRPORT LIFE | ​Airport life is a major part of the Race. We would literally spend hours upon hours waiting for flights, trying to scavenge for food and research our next location, and C​olombia w​as our introduction to this craziness. I think we slept on the floor of the terminal for a total of about an hour-and-a-half waiting for our connecting flight to Cartagena. At one point I woke up with my hoodie covering my head as a stranger literally stepped over me while laughing. #Casual.

UNDER THE SEA | C​olombia i​s full of charming little beach communities, so thankfully CBS set up several of our challenges near the coast! I love Beaches the movie, I love looking at beaches and I love long walks on the beach, but I hate the creatures in the ocean, especially fish. I unwillingly became a fisherman at the age of six when I caught a fish in my swimsuit lining, and I have been traumatized by that thing flapping around in there ever since. As a rule of thumb, I don’t touch fish, or eat fish, or have fish as pets, so having a fish challenge was almost as traumatizing as my belly button rash.

A LOCAL SAVES THE DAY | W​hen we boarded our final flight to Cartagena, I had the pleasure of sitting next to the nicest local man. While we were getting ready to takeoff, he literally called his brother-in-law and asked him to pick Erin and I up from the airport. After I explained that we had to take a taxi, he then offered to let us stay with him and his wife on their ranch. Talk about hospitality! (We were definitely a long, long way from L.A.) He then proceeded to draw me a picture of the Cartagena airport so that Erin and I could sprint to the taxis as quickly as possible. Not only that, he gave me his business card so we could stay in touch. We pretty much became besties and he helped us get a huge head start. Fast forward a few days and guess who I see again at the airport? OMG, my Colombian bestie! The world is so small, especially on The Amazing Race!