Here’s a brain teaser that might stump even the brightest members of Team Scorpion: How long can two emotionally stunted geniuses keep up a romantic relationship?

The CBS drama begins to answer that question on Monday’s episode (9/8c), in which Toby and Happy — who were revealed in the Feb. 8 outing to be officially dating — will have their newfound romance unceremoniously uncovered by their colleagues.

“Let’s say that the reactions will vary throughout the team, but not everyone is going to be thrilled with it,” executive producer Nick Santora hints to TVLine. 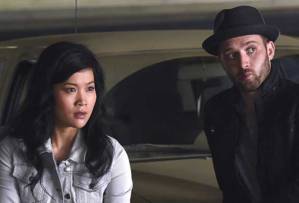 But the discovery of Toby and Happy’s big secret will be just one of several obstacles the couple encounters during the rest of Season 2. According to Wootton, the Scorpion writing staff isn’t afraid to throw Toby and Happy into the deep end immediately — even if it did take them months to even share a kiss.

“This is a relationship that can be as tempestuous as we want it to be. Toby is such a livewire, and Happy is not used to making commitments,” he teases. “It’s really anything goes for this relationship, and that makes it very fun to plot out.”

And whether or not they intend to do so, Toby and Happy will serve as a trial run for all future workplace romances — something that Walter and Paige will be studying very carefully.

“Toby and Happy being together basically becomes a test case for Walter and Paige,” Santora shares. “It’s a way for them to see how a relationship in the garage may or may not work, from a safe distance. It allows them to consider if something would possibly work for them, but neither of them would ever admit what they’re doing — observing Toby and Happy.”

Scorpion fans, how do you feel about Toby and Happy (finally!) getting together? Hit the comments with your hopes for their relationship.