This Wednesday on Arrow, Damien Darhk’s demolition team huffs and puffs and targets our band of heroes with some carefully orchestrated building deconstruction. Elsewhere, Thea makes a big discovery about Oliver, and then gives her brother some disappointing advice.

The danger kicks off when Lance answers a breaking and entering call. But why the heck is such a simple offense being related to the Police Captain, Laurel wonders. Her instincts are right-on: the whole structure starts to crumble around Lance, but thanks to his daughter’s help, he manages to get out with only a nasty head wound.

H.I.V.E.’s new hired goons aren’t done yet, though. Felicity tracks the call’s origin to a factory, where Team Arrow gets ensnared in another demolition. As they run out, Thea grabs a laptop containing blueprints and escapes through a window. Oliver asks Felicity to mine the damaged device for the next target, prompting her to note it’s “kind of romantic” how the request echoes their first meeting. She, in turn, tasks Curtis with uncovering the data, which points to the location of the mayoral debate. But wouldn’t Darhk kill his own wife in the process? Oliver surmises that Ruvé wouldn’t be harmed — and instead come out the sympathetic survivor of such an attack. 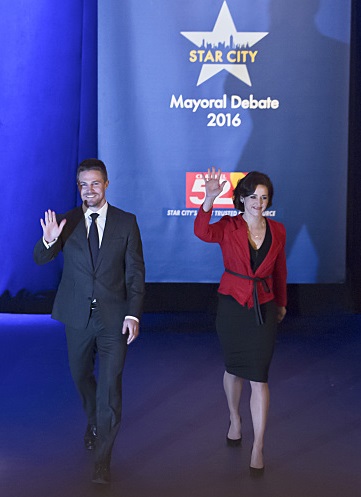 Felicity sets about hacking the fire-alarm system in order to evacuate the building, but Thea brings out an old high school trick by just pulling the alarm. (Nice one, little Queen, but it doesn’t make up for the lying exchange I’ll get to later.) The team thwarts the demolition and Oliver comes out the clear winner in the debate – “That’s nice applause. Enough to bring the house down. Almost,” he whispers to Ruvé – but his troubles are far from over. At the close of the hour, Darhk introduces his daughter to Oliver’s son William, who will be staying with them. (And the preview for next week suggests it isn’t a voluntary stay, as Darhk declares he kidnapped William.)

Now onto the Lying Is a Queen’s Sport portion of the episode. After finding out the truth about William, Thea basically gives her brother permission to keep lying to his fiancée, even as he expresses guilt over it. As far as Thea sees it, he’s keeping a promise to the mother of his child and maintaining William’s safety. “Thank you for saying what I needed to hear” , Oliver responds.

Lance does a bit of lying to his loved one, as well, in order to protect Donna. However, she has a finely tuned BS detector and doesn’t buy his story about owing money to some bad men. Rather than taking some time apart, she suggests they call off their 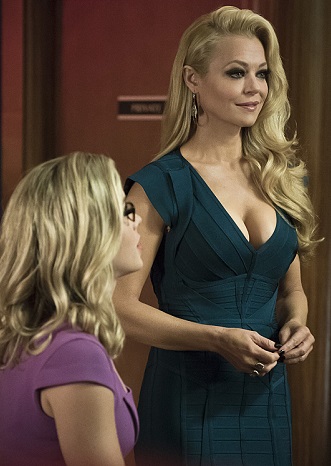 relationship. Donna is heartbroken, confiding in Felicity that the reason she’s been going overboard on her and Oliver’s engagement party – glitter bomb invitations! Pin the Junk on the Hunk! – is because she’s living vicariously through her. “You [and Oliver] don’t lie to each other,” she tells her daughter. “I’m never going to find a love like that.” Felicity suggests that maybe she should return Lance’s love with a little trust. At the soiree, the Captain finally confesses that he was working with H.I.V.E. (to protect Laurel), and the two kiss and makeup.

Meanwhile, Curtis gives Felicity the best engagement gift ever: an implantable bio-stimulant that will one day help her walk down the aisle – if there even is a wedding.

In flashbacks, we learn Reiter believes Oliver has been bestowed passage to some hidden place that houses a powerful object. So he needs to keep him alive, but there are many various forms of alive, Reiter notes. And Oliver finally kills Conklin, praise be!

Arrow fans, what did you think of the explosive episode? Was Thea in the right or wrong? Hit the comments with your thoughts!