When American Crime‘s second season wraps its 10-episode run, it will be very easy to break the sophomore year into two distinct halves: before and after the events of Episode 7.

That’s because Wednesday’s installment — in which a deeply rattled Taylor Blaine shot a Leland High student — rocked the ABC drama to its core, and the weeks that follow will turn the season-long rape investigation on its head.

“Things are not the same after this episode as they were before, so there’s an enormous amount of weight on it,” Taylor’s portrayer, Connor Jessup, tells TVLine. “[Series creator] John [Ridley] wrote the script, and he came back to direct this episode, so he obviously cared very, very much about it and thought it was very important.”

We caught up with Jessup to break down Wednesday’s pivotal hour, including the frazzled thoughts that led to Taylor’s gun violence and how he and his mother will cope in the wake of the life-altering Leland shooting.

TVLINE | What was your initial reaction when you saw the lengths that Taylor goes to in this episode?
[I was] fearful. This episode, more than any of the others, is Taylor-centric in a lot of ways, and it’s a shift in the series. I felt a great deal of anxiety about whether or not I could pull it off. There’s always a little bit of fear when something changes so dramatically, because until Episode 6, I didn’t know this was going to happen. You always start reading the script and going backwards and saying, “Has this been set up? Have the seeds been planted? Is it going to make sense? Are people going to watch it and think, ‘That’s not Taylor?’” There’s all this anxiety that you project onto yourself, so there was that. Once we started shooting, and I worked with John more closely, it became obvious that he knew exactly what he was doing. That gave me a certain amount of comfort. 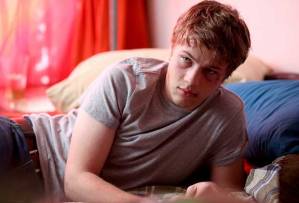 TVLINE | You have a big presence in this episode, but not a whole lot of dialogue. Can you take me through Taylor’s thought process during the hour?
I want to try not to deconstruct it too literally, because it’s a hard thought process to describe, because it’s fairly irrational. It really doesn’t follow “A plus B plus C equals D” logic. He’s so afraid, and his thoughts and feelings become so fragmented that he really just pursues the path that seems to have the least resistance. Everything’s burning and everything’s painful and everything hurts, and he’s trying to find some relief from it, some way out of it, some way to grasp a feeling of power or strength.

Over the course of the series, Taylor tries a few things, and they all fail. He feels pushed and pushed and pushed to more extreme options. His thought process isn’t so much rational as it is just moving as quickly as he can toward whatever door is open.

TVLINE | Taylor’s first move after the school shooting is to go to his mom and tell her he’s in trouble. Why didn’t he run in the opposite direction and try to escape the whole thing?
In that moment, he’s a kid, or he’s a hurt animal. I don’t know how to describe it in a way that doesn’t sound obnoxious, but when you’re a kid and you’ve done something that you don’t understand or can’t wrap your head around, you go to your mom — or at least, I would. That’s his thinking. He’s thinking much less about the consequences and how it’s going to end or what he’s going to do. In that moment, all he’s thinking is, “I need my mom.” That’s the logic of it, to me.

TVLINE | We have seen the topic of suicide explored on this show before, when Eric tried to take his own life. As a viewer watching this episode, I thought Taylor might be going down a similar path when he took the gun into the woods. Is there any part of you playing Taylor as a character who’s considered — or might still be considering — suicide?
That’s an interesting question — yes and no. When he is desperate to find something he can do and some way to take back power, that’s certainly an option that crosses his mind. When he takes the gun from their house, I don’t think he knows what he’s going to do with it. He doesn’t know how it’s going to end. He can just as easily throw it into a river, or he could kill himself, or he could kill someone else, or he could just fire it a few times and forget about it. He really doesn’t know. He just needs to do something. So yes, that’s on the table, but it wasn’t something that I perseverated on.

TVLINE | You mentioned earlier that there’s going to be a huge shift in the series, in the wake of what Taylor has done. How is it going to impact him and his mom, specifically?
Up until this point, the first six episodes have been dealing with the aftermath of this assault allegation, and every family and individual deals with it in their own way. But the case is not the same anymore. The circumstances are completely different after Episode 7, and people are affected in radically different ways. If Episodes 1 through 6 were people dealing with the fallout of the assaults, Episodes 8 through 10 — and I don’t think I’m saying anything that would surprise anyone — are about people dealing with the fallout of what happens in Episode 7. There’s a lot of questions that are raised, in terms of the nature of what Taylor did and who’s to blame and how much blame [should be placed]. And what effect does this have on the still-open sexual assault case? It follows all of those questions to their conclusion.

Your thoughts on the latest American Crime outing? Drop ’em in a comment.