Are you taken aback that the promo for Tuesday’s Chicago Med (NBC, 9/8c) is teasing a possible Will and Natalie kiss, especially in light of their recent shouting match? Well, Nick Gehlfuss is right there with you.

After expressing his surprise at the contents of the tantalizing footage, the actor who plays Dr. Will Halstead offers up some assurances to TVLine that it’s not just false hype.

The hour “is going to put a lot of things into perspective” for the two close friends, Gehlfuss previews. “You don’t want to miss it.”

Below, Gehlfuss talks about Will’s feelings for his colleague, his rivalry with Dr. Connor Rhodes and his uncertain future at Med.

TVLINE | Everyone at the hospital knows that Will likes Natalie, but does she know?
I think when you’re that close with somebody, as far as being really good friends who work together and see each other quite a bit, it’s a fine line [between] what you know and what you don’t. It takes other people, sometimes, to tell people what they feel and what’s going on between them because they’re so focused on their work. In that sense, [Will and Natalie] may be surprised by what happens.

TVLINE | What’s holding him back from confessing his feelings to her?
He knows that she has another man’s child, and it’s only been a little while since her husband has passed. And her mother-in-law probably doesn’t make it easy for him. [Laughs] It’s a precious thing. It’s a delicate situation. You could potentially ruin a friendship if things don’t work out well, and we work together, so that’s something you have to deal with every day.

TVLINE | When Chicago Med premiered, Natalie was a new character – she wasn’t in the backdoor pilot – and she and Will already had an established relationship. Was there a backstory that you and Torrey DeVitto came up with, or that the writers gave you?
Torrey and I have had conversations about what our relationship was. We decided they met at Chicago Med. She’s from Seattle and she came to Chicago Med and her husband was always away overseas. [She and Will] were friends, naturally, and possibly there was a connection. And then when she lost her husband, I’m sure that I was there for her. You know how in that type of situation… you see each other in some very down moments. That can strengthen a relationship, for sure. 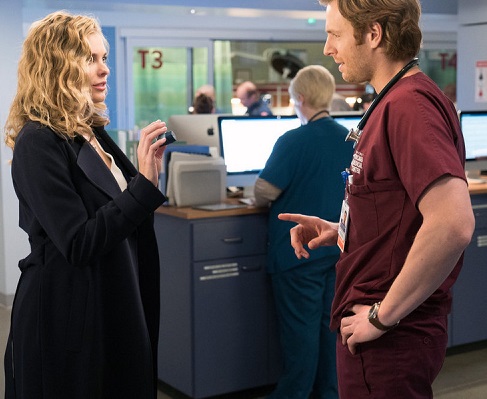 TVLINE | So, does Zoe the pharmaceutical rep (Jessica Jones‘ Susie Abromeit) even stand a chance?
He’s keeping his options open. He’s a single guy, he’s a passionate guy. And no doubt there are some beautiful women at Chicago Med… Zoe is a lovely girl, and I don’t think Will wants to hurt either of them. [Tuesday’s] episode will change his workplace dynamic between these two females.

TVLINE | Will is in some hot water as a result of his latest case. What impact will that have on his career?
There’s a lawsuit that’s being brought into place, and they’re going to have to take a close look at it and see how at fault Will was. It’s very complicated because there’s a clinical trial, and if [the patient] gets better and the drug works for this woman’s cancer, he’s thinking that they may drop the lawsuit. So Will is banking on this woman getting better within the drug trial. But the woman didn’t want to live in the first place, so it’s this really tricky situation. He could very well be terminated for doing what he did. I hear Chicago Law is coming out, so maybe Will Halstead can be a lawyer. [Laughs] I’m kidding. 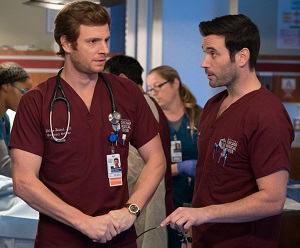 TVLINE | Has that relationship between Will and Connor gotten any better? Or will the rivalry flare up again?
The rivalry will stir up again. When it rains, it pours. Connor and Will definitely have some things to figure out between the two of them. They’re still colliding here and there within the workplace, but they also have a lot in common. When Will found out about [Connor’s] mother, he had a little bit more respect… There’s much more to be had between these two gentlemen.