As the battle for Alexandria neared its tipping point in the midseason premiere of The Walking Dead, even hapless Eugene refused to “clock out,” predicting, “Hell, this is a story people are gonna tell.”

And was he ever right.

The series’ thrilling comeback served up major casualties, a montage that was gasp-inducing, it was so intense, and a plot twist that left one of our survivors forever changed. Who was still standing when the smoke cleared? Read on and find out:

‘BITE, CHEW, SWALLOW, REPEAT’ | Beginning with the “coda” that followed “Start to Finish,” “No Way Out” kicks off with Daryl using his new bazooka to blow up Negan’s biker gang. (Which is kinda a shame, because the lead baddie turns out to be pretty funny. For instance, when Abraham is reluctant to hand over his weapon, the guy offers this sage advice: “If you have to eat s—, [it’s] best not to nibble.” #wordstoliveby)

Back in Alexandria, since apparently zero walkers noticed Sam calling out for his mom in the winter finale, Rick & Co. survive among the horde long enough for him to decide that flares aren’t gonna cut it; they’ll need the vehicles from the quarry to lead the zombies outta town. After Gabriel — his redemption nearing completion — volunteers to take Judith to his church for safekeeping, Jessie suggests that he take Sam, too. Unfortunately, the boy insists that he could keep going. Yeah, that’s gonna work out greeeat…

Just outside of town, while Glenn and Enid search a(nother) church for items that would help them rescue Maggie — my fave: the “Bible Glock” — the teen asks her traveling companion WTH he meant when he told her that running was how one lost people even after they were gone. In response, he inspires her by explaining that people we loved and lost remain a part of us until we give up being who we are. 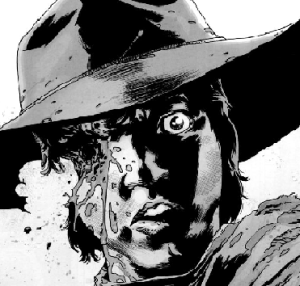 FAMILY DINNER | Haunted by Carol’s long-ago description of the monsters devouring him, Sam eventually has the freak-out that we all assumed was coming, and is attacked by walkers. In turn, Jessie freaks out and is attacked, too. When, even while being eaten, she won’t let go of Carl’s hand, a traumatized Rick severs their connection with an axe. Enraged, Ron points his gun at Rick — or so the directing seems to indicate — and before Michonne can machete the kid, he shoots out Carl’s eye!

Meanwhile, Denise and her captor are bonding more than I think any of us could have imagined they would. Hiding from walkers, the Wolf admits to her that she had been right — he wasn’t born this way, he’d changed… and he will help her change, too. After he gets bitten saving her from a walker, she suggests that maybe his heroism proved that he’d changed again — for the better — and promises to save him, if he’d help her get back to the infirmary.

Holed up with Tara, Rosita and Eugene, Morgan cautiously asks Carol about her daughter. She isn’t interested in accepting any olive branches, however. “I should’ve killed you,” she says. “You can’t,” he responds. And therein lies the rub. Shortly thereafter, she spots Denise and her abductor making their way to the infirmary and does what she’s wanted to all along — shoots him.

‘WE CAN BEAT ‘EM!’ | After leaving Carl in Denise’s care in the infirmary, Rick goes back out into the streets of Alexandria and just starts wailing on walkers. And at first, it seems like he might be having another breakdown. (Could ya blame him?) But once he’s joined by Michonne, Heath, Spencer and Aaron, he reveals that he isn’t losing it — he’s trying to win back Alexandria.

Spying the action from his church, Gabriel hands off Judith to a parishioner and tells his congregation that their prayers had been answered. “God will save Alexandria,” he says, “because God has given us the courage to save it ourselves.” (Boom — redemption complete.) In short order, Carol, Morgan, Tara, Rosita and even Eugene all join in the fray. Happening upon the zombified Wolf he’d tried to save, Morgan says, “I’m sorry” before putting him out of his misery.

Nearby, Glenn winds up getting cornered by a bunch of walkers while trying to draw them away from Maggie. And, for a harrowing moment, it looks — yet again! — like he’s done for. But, at the last second, Abraham and Sasha open fire, miraculously missing Glenn and taking out only the zombies. (Can we now call a moratorium on “Glenn’s doomed! Ha, he’s not!” twists?)

‘THERE’S GOTTA BE MORE’ | While Daryl starts a fire that attracts walkers like they are moths to a flame, Rick and not only his crew but the Alexandrians, too, turn into a veritable assembly line of zombie carnage. (Seriously, if that insane walker-whacking montage didn’t give you goosebumps, it’s probably too late to amputate — you’ve already turned.)

The morning after, while the shell-shocked survivors are staring at the walker-strewn streets like, “I’m not cleaning up this mess!” Rick is in the infirmary, telling an unconscious Carl that, when the battle had ended, he’d had a feeling, an incredible feeling — that everything Deanna had envisioned was possible. Rick hadn’t thought that the Alexandrians could learn, but lo and behold, they had. So he really wants Carl to wake up. “I wanna show you the new world,” he says tearfully. And, at last, Carl squeezes his hand.

So, what did you think of the midseason premiere? Grade it in our poll below, then hit the comments to discuss!