Death paid its annual visit to Downton Abbey on Sunday, triggering a series of rash emotional decisions — some more upsetting than others.

Charlie’s fatal car crash took the heaviest toll on Henry, who emerged from his initial spiral of survivor’s remorse with an impassioned proposition for Mary: “His death has made me realize that you and I don’t have a minute to waste,” he told her during a late-night phone call — the “Hotline Bling” of the 1920s, if you will. “This is my carpe diem, and I must seize the day.”

But if you were hoping for a warm reception to Henry’s thinly-veiled proposal, this next part probably bummed you out:

“Today has made me realize something, too,” she replied. “We’re not meant to be together, Henry. We’re not right. … I want you to have a long and happy life, just not with me.”

Despite Tom’s suggestion that Mary reconsider shutting Henry out of her life, she seemed pretty set in her ways as she stormed upstairs to bed.

A DECENT PROPOSAL | Mary and Henry’s relationship might be on its way down the toilet, but for the first time in forever, Edith’s love life is heating up. She even got an unexpected — though not totally unwelcome — proposal from Bertie, which inspired this devastating response, “I don’t ever think i’m the sort of girl men are mad about.” She told him she needs some time to consider his offer, but I’d be shocked if her final answer was anything other than a strong yes. I’ve always seen Edith’s time at Downton as a sort of purgatory; she’s paid her dues, and her future is looking bright. (I’m also really excited to watch her go off on that “nasty, jealous, scheming bitch” Mary next week. Did anyone else audibly gasp during that preview?!)

CARSON V. HUGHES, ROUND 2 | Still annoyed with Carson for his behavior towards his new wife last week, I wanted to throat-punch him through my TV screen when he asked her, “Are you sure you know how to cook it?” in regards to this week’s dinner. He needed to be taught a lesson, and thanks to Mrs. Hughes’ well-timed hand injury, he got it. The look on his face when he realized he’d have to cook dinner was priceless. In fact, let’s take a nice, long look at it: 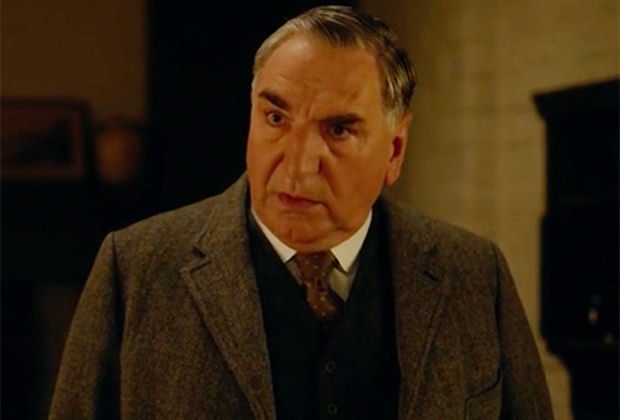 * Tom is totally hitting it off with Edith’s new editor, right? I’m not imagining that? She comes across as a more likable Miss Bunting; I even see shades of Sybil in her.

* Who was that guy lurking in Mrs. Patmore’s bushes with a pad and camera? My assumption is that he’s a reporter who thinks she’s running a brothel — which, for the record, is a spinoff I would absolutely watch.

* Robert’s new dog felt a little too much like a parting gift from the Dowager Countess. I really hope she’s not gone for too long. (We’re running out of episodes here!)

Your thoughts on this week’s Downton Abbey? Drop ’em in a comment below.