On a special Sunday installment of ABC’s Castle, Rick’s testimony as the witness to a murder took an unexpected turn when the mysterious Caleb Brown stepped in to represent the defendant.

I was curious how this episode would play out, given the episodic photos that had been released. Namely, why would Rick be attending a book reading in the middle of a trial/investigation?

But as we see right away, that gathering in fact took place five months prior, and it was where Rick witnessed what appeared to be a cater waiter’s murder of a well-regarded reporter named Sadie (played by One Life to Live alum Darlene Vogel).

Flash forward five months and Rick is poised to testify at that murder trial, as the key witness in a case that is otherwise built on circumstantial evidence. Marcus the ADA might have put the defendant, Nina (The Guild‘s Clare Grant), away in a jiffy had the public defender dubbed “Short Attention Span” Stan not become unavailable. In his stead, Caleb Brown — whom we heretofore have only barely known as a LokSat mouthpiece — steps in to defend Nina, and to that end he hits Castle hard with his cross-examination.

Caleb brings up Rick’s “history of memory loss,” how his Beckett/NYPD-inspired books have noted that “eyewitness” testimony can be suspect, and how Rick himself has been framed for murder in the past. With all that heaped on, Rick must admit, “It is possible” that Nina wasn’t in the midst of killing Sadie when he saw her over the body. (Based on the flashbacks, I’m shocked that seen-it-all Rick ever was quick to conclude he was witnessing a murder, though Nina making a run for it afterward probably sold the notion.)

With the case nudged back open, Rick & Co. set out to bolster Marcus’ case — or, if need be in the name of justice, blow it up. When it’s uncovered that Nina and Sadie were in fact lovers, the theory turns to “crime of passion” — until Nina, during a jailhouse heart-to-heart with Rick 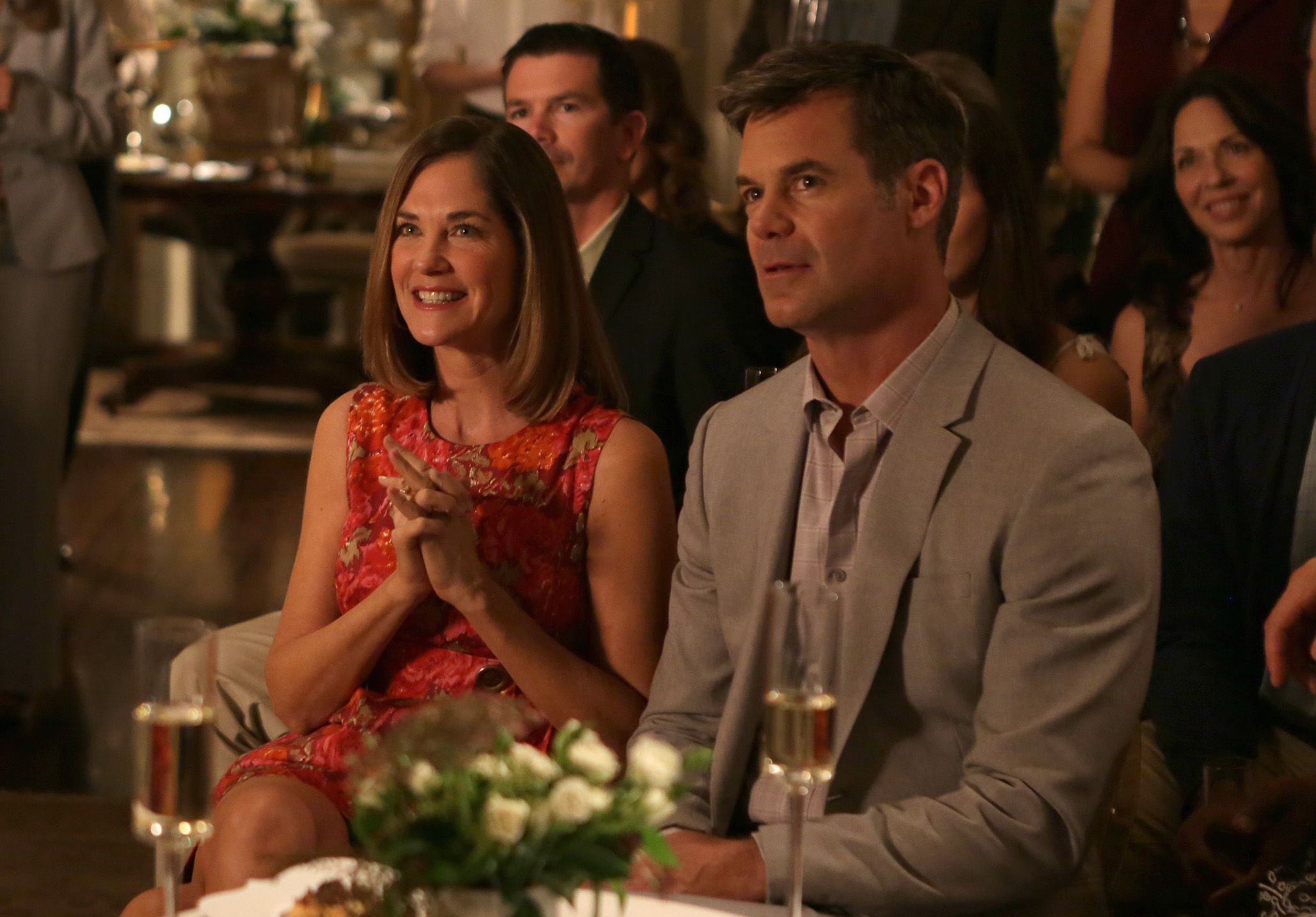 (who’d gotten himself thrown behind bars by clumsily insulting the judge), reveals that Sadie had begged her to steal party host Roger’s (One Life to Live alum Tuc Watkins) champagne glass. Everyone of course surmises that Sadie was out to prove via DNA that Roger, her cameraman, had fathered her daughter. Except Roger is infertile, his wife Joanna (One Life to Live alum Kassie DePaiva) points out. Rather, Sadie wanted his fingerprint off the glass, so as to access a home safe in which he kept an old videotape of them coming across a huge stash of cash whilst reporting in Iraq. (Sadie at the time balked to Roger’s idea to steal it, only to later take it for herself.)

And yet, the idea of infidelity is what got Sadie killed that fateful night, when her husband shimmied up a driveway basketball hoop to presumably catch her upstairs “in the act” with Roger, only to learn she was actually involved with a woman. In a fit of rage, he offed his wife, then cleaned up quickly in the downstairs bathroom that Rick had been waiting to use in the first place.

In the aftermath of Nina being exonerated, Ryan and Espo were singing Caleb Brown’s praises as a public defender with a good head on his shoulders. When Vikram frets over their adversary’s new, sterling reputation, Beckett counters that at least they have found Caleb’s weakness, as a “monster desperate to do good.”

What did you think of Castle‘s special Sunday outing, the OLTL reunions, the closer look at Caleb Brown and the throwaway line about Lanie having asked out Marcus?