If Klaus and Cami are the Ross and Rachel of The Originals, then Friday’s episode marked the uncomfortable “We were on a break” portion of their relationship — only replace that line with “You stole my dark objects.”

Klaus’ “therapist” — which is a weird way to refer to your girlfriend, but whatever — had every intention of trading the White Oak Doll™ for the objects he’d taken from her, but Cami forgot one very key detail: New Orleans is literally crawling with supernatural thugs, and any one of them would kill to get his/her/its grubby mitts on it.

Enter Aya’s li’l army of witches, whom she tasked with retrieving the location of the White Oak Doll™ from Ariane’s lifeless brain. Davina was the only one able to break in, and since she wasn’t about to give up her girl Cami, Aya’s super-grumpy witch leader was forced to pull it out of her. But wait… she wasn’t working for Aya! She actually stole the doll for Aurora, who proceeded to turn it into a set of White-Oak bullets!! There are not enough exclamation points to sufficiently express how bad this is!!!

Elsewhere in the Big Easy this week… 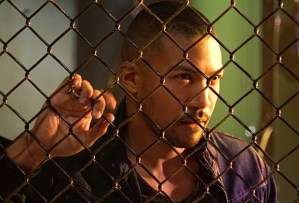 POLITICS AS USUAL | Marcel Gerard? More like Marcel Charade! (For the record, that joke works much better if you read it in Aya’s accent.) Anyway, Marcel — who’s apparently much smarter than I’ve been giving him credit for — took advantage of Elijah and Aya’s (metaphorical) peeing match over leadership of the Strix, swiping the coveted charter right out from under them. But wait… it turns out Marcel and Elijah were actually working together to distract Aya from White Oak-gate! [Insert gif of my mind being blown here.]

And since the two are apparently so chummy, perhaps Marcel will share what Aya revealed in the episode’s final moments: that there’s a spell capable of severing the sire lines, and Davina is just the witch to get it done. (It’s too bad I wasted all my exclamation points earlier, because I could really use a few right about now.)

* I was excited by the prospects of “Campire,” and I still have faith in the writers, but I wasn’t expecting her to take such a villainous turn so quickly. How do we feel about that?

* I’ll bet Hayley just loved hearing about Elijah and Aya’s epic romance. Truly, it must have been the highlight of her week.

* I wasn’t too pleased to hear that “things are not going well” for Kol, but I’m excited that Davina is determined to rescue him — especially if it means she’ll keep pairing up with Ariane. (I really miss Chasing Life.)