My head admittedly was swimming early on during this week’s Arrow, as Oliver and Nyssa (…and then Nyssa and Laurel) repeatedly made their cases for killing Malcolm — or not. But by the end of the hour, a long-running piece of show mythology had interestingly come to an end and a time bomb was set in motion, to eventually explode Oliver’s imminent marriage.

Again, I’d be foolhardy to aptly recap the to-and-fro between Oliver, Nyssa and Malcolm. Mainly, she wants Malcolm dead, for killing Sara among other transgressions, but she wants Oliver to do the deed. In trade, she will deliver the Lotus elixir needed to cure Thea’s bloodlust. Oliver, though, sees another option — the Lotus in exchange for Malcolm surrendering his position as Ra’s.

Malcolm questions the conveeeeeeenient existence of such an elixir, but after Oliver secures a sample that eases what ails Thea, he calls a meeting to surrender. Yet what Malcolm actually does is surprise Nyssa with an ambush. She and her minions retreat, while Oliver, Dig and Laurel keep Malcolm from giving chase.

When Malcolm later resurfaces at the lair, he explains that the League is no mere army of assassins but a “force of change” that has been “manipulating global events for hundreds of years,” and he’ll be damned if he’s going to put that kind of power in Nyssa’s hands. Malcolm then catches Oliver off guard by making the argument: Would you let Damien Darhk have his way with Star City if it meant saving your son William? :-O

Oliver suggests that Malcolm challenge Nyssa to a Trial By Combat, which they set out to do on a boring ol’ urban rooftop, no snow, and with shirts on. But at the last moment, Oliver steps in to fight on behalf of his “wife.” In a duel that was over way too quickly, Oliver bested Malcolm but rather than run him through with the sword, he merely lops off his left hand.

Later, Nyssa summons both men to a meeting, where she throws the demon’s head ring into a fire and announces that the League has been disbanded. Afterward, Malcolm hisses to Oliver that he owes him a debt far worse than death, as the result of this remarkable unspooling of events. What Malcolm does is offer Damien Darhk the 411 on the person Oliver Queen cares about more than anything — no, not Felicity Smoak, but his son William. 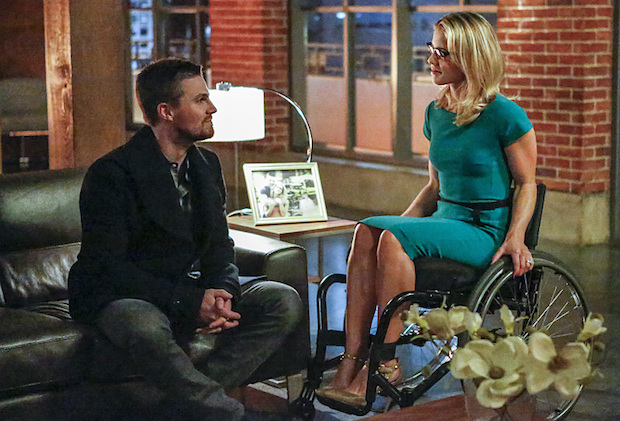 Felicity met her father, Noah, for coffee, where he offers to answer any questions she may have — and she has but one: Why show up now? He tells of how he recently met up with a formidable adversary, and then calls Felicity by her Overwatch code name. Realizing that Dad is The Calculator, Felicity is about to leave skidmarks, but he stops her and asks for a chance to prove he is neither a bad guy nor a “bad guy.” Felicity tells Oliver and the team about her blood ties to The Calculator (she didn’t tell her fiance right away that her long-lost father showed up…?), and then drops the bomb on her mom, to boot. Donna warns her daughter, “People never change, even if you want them to” — and certainly not Noah, as he demonstrated years ago.

Felicity seems to have a change of heart by giving Dad a 10-cent tour of Palmer Tech’s most super-duper-secret R&D area, but it turns out to be a trap — she was testing to see if he left behind any data-sucking hacker gizmos, and he did. When Noah shows up at Felicity’s office for more bonding, she rebuffs him and declares that there is only one thing she for sure knows about him — that he is wanted by the police, and as such here is Quentin Lance with a pair of bracelets for you. Oh, and one last thing: shared hacktivism hobby or not, “I am nothing like you,” she growls.

After the encounter, back at the loft, Oliver asks Felicity to marry him — soon, now that Thea is better, Darhk has quieted down. “I’m in,” she smiles back, teeing up the aforementioned scene in which Malcolm tells Darhk about Oliver’s secret son….

What did you think of “Sins of the Father”?