A word of warning to the characters on American Crime: That phone call you’re about to make is probably not a good idea.

When Season 2 of the ABC drama began, Lili Taylor’s Anne Blaine made a 911 call (“I’d like to report a rape”) that rocked both her and her son’s worlds, with arguably very little payoff. And on Wednesday’s episode, history repeated itself when Joey Pollari‘s Eric Tanner picked up his cell phone and dialed rape accuser Taylor, asking if the two could hash things out at the local rec center.

But that pivotal phone call was all a set-up, a ruse concocted by Leland High’s basketball team so they could meet up with Taylor and attack him — payback of sorts for all the grief he’s caused Eric, Kevin and the rest of the players with his sexual assault accusations. (Whether the teammates actually do jump Taylor remains to be seen; the episode ended with Taylor running away from the men when he realized he was about to be beaten.)

TVLine caught up with Pollari to discuss that regretful phone conversation, how it will affect Eric in weeks to come and how the troubled teen — who recently attempted suicide after revealing he did sleep with Taylor at the captains’ party — will cope with even more challenges on the horizon.

TVLINE | Before you began filming this season, had you been told anything specific about Eric? Did you know he was gay and that he’d go through such a struggle with his sexuality?
The sides that I auditioned with were not in the show at all, [which said that] Eric was gay. When I got to set with [series creator] John [Ridley], that information was still true, but everything else had shifted, which was really exciting — and scary to be in the unknown like that. I did not know that much about where the arc was going, but there was just a trust there. I trusted John and [executive producer] Michael McDonald to do what they would, and I would just show up and bring what I could to it.

TVLINE | Two weeks ago, we saw Eric dealing with such guilt and insecurity over his homosexuality that he tried to take his own life. This week, he acknowledged he was gay but insisted he wasn’t an ambassador for gay teenagers. What’s his real stance on his sexuality right now?
We saw in Episode 5 how he can’t talk to his father quite in the way that he hopes to talk about being gay. In this episode, the school is now using his pain, and he is slightly aware that this is a strange situation. Leslie Graham is taking a special interest in him. As that progresses, Eric is caught in a place of, “This is way over my head. I just want to go back to school. I just want to be back to where I was, except with this added fact.” But he’s struggling up against a wall that this added truth — that people now know that he’s gay — is actually threatening everything that came before. Even the school, who he hoped to turn to, is using it for their own advantage. 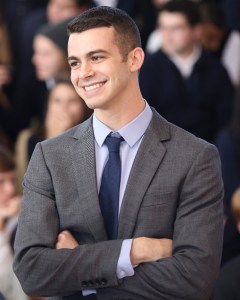 TVLINE | Were you surprised to see that everyone in Eric’s family — especially his mom — is so homophobic?
I was, because of course, as an actor, I was looking for someone [to support me]. His dad is there for him in some sense. He just doesn’t know how to talk about it, which in some ways, for Eric, is even harder. Not only is there someone there, but they can’t even talk about it. That overwhelming feeling is so true for so many in this process that it just rang true, as sad as it is to be a part of.

TVLINE | Speaking of which, how much research have you had to do for this heavy a role? Have you worked with teenagers who have struggled with sexuality?
I looked up a lot about personal struggles, whether it’s about being gay or not. Everyone growing up, and going through high school, has to come to terms with something that is tied to shame, and it’s a difficult time to be who you are. And then when it came to coming out and being gay in high school, I was looking at some of these videos of teenagers choosing to come out, and it seems to be a recent trend — and a good one — that people are calling their families and telling them. It’s an extremely emotional journey to watch, and I would sit and just take in [these kids] wishing to be accepted and struggling to speak the truth when they know it’s their truth. I was looking at forums for depression, especially as it related to being gay. Even in its specificity, it seemed to have such universality to it, and I really connected with that.

TVLINE | Right now, Eric seems to be all on his own. Will he eventually find someone that can be an ally, or will he fly solo for the rest of the season?
We won’t see him flying entirely solo. I don’t think we’ll see him finding a partner, at least not romantically, in that way. But the relationship with his father shifts over the course of the season into maybe not what Eric was thinking or expecting, but what Eric might really need. The light at the end of this tunnel, especially in American Crime, is one realization. I love the show for this reason. The catharsis is the “A-ha!” moment. It’ll be great for fans to see how that translates to something so small, such a small realization that Eric eventually has.

TVLINE | Eric was also seen making a really tough phone call, in which he essentially tricked Taylor into getting attacked by the basketball team. How is that going to impact Eric next week?
That one phone call changes everything. The wish to get assimilated back into the team is a dangerous wish for Eric. We’re going to see the repercussions of that for Taylor, for Eric and for Kevin, who, at least at the end of Episode 6, is unaware of what the team has done. The echo of that phone call will be seen over the course of the season.

TVLINE | As it stands right now, is Eric more interested in coming to terms with his own sexuality, or just getting his status on the team back to where it was?
Eric does think he has a grip on his sexuality. He says in that interview, as insensitive as it is, that he’s just a gay guy. That’s his stance. He’s Eric, and he just happens to be gay. I don’t think even Eric understands the levels to which that one truth that he’s been hiding affects all of the truth that he’s been trying to put forward. It’s very precarious. He doesn’t know that he should be trying to understand [his sexuality] as much as he should be. Over the course of the season, we’ll see how he’s just trying to get back into acceptance, and how the road to others’ acceptance starts with his [own], eventually.

OK, your turn. How did you feel about Wednesday’s episode of American Crime? Hit the comments.