Hulu’s new limited series 11.22.63 (premiering Monday, and airing weekly) goes one better – fashioning that circle out of polypropylene mesh, stretching it over a steel frame and turning time into a terrifically taut, fantastically fun trampoline.

Based on the Stephen King novel of the same name, the action centers on recently divorced English teacher Jake Epping (127 Hours‘ James Franco), who gets introduced to a portal in the back of his favorite diner that transports users to Oct. 21, 1960. The owner of the greasy spoon, the crusty, paranoid Al Templeton (Oscar winner Chris Cooper) has been using the wormhole to try to stop the assassination of President John F. Kennedy, and his dying hope is that Jake will take his years of research and surveillance on Lee Harvey Oswald, his close friend George de Mohrenschildt (among other sujects) and alter the course of history. 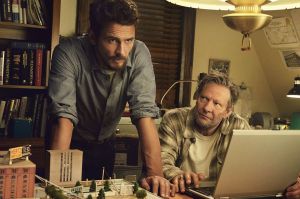 The task is hardly as simple as getting a good spot on a certain grassy knoll, though. While Al explains that you can spend years in the portal with only two minutes passing in the present day, all of your actions reset if you return back to 2016, then enter the portal again. Oh, and seeing how time isn’t a fan of extreme makeovers, she has a tendency to throw big, nasty wrenches into the plans of anyone fixing to hijack her appearance.

It doesn’t take long for Jake to accept the assignment, and soon, he’s donning period garb — tailored suits, stylish hats, and no sign of his scruffy goatee — and trying not to drop any 2016-isms under the assumed identity Jake Amberson.

It’s a testament to the show’s set and costume designers that 11.22.63‘s version of the 1960s feels so fully realized that you almost instantly accept its out-there premise and immerse yourself in the yarn.

And what a yarn it is! In the first five hours screened by TVLine, 11.22.63 functions as a good old-fashioned spy thriller, a sweet love story, a freaky slice of sci-fi (there’s a scene involving cockroaches in the pilot episode that’ll give you nightmares) and in Episode 2, a classic tale of horror. Plus, every time Jake hears someone utter the words, “You shouldn’t be here,” you’ll shiver at the prospect that there’ll be terrible consequences to the mission.

That mix of genres and overarching sense of dread make sense, considering 11.22.63 is executive-produced by J.J. Abrams (Lost, Alias) along with writer Bridget Carpenter (Parenthood, Friday Night Lights) and King.

Franco anchors almost every scene, and does a terrific job letting us see slivers of his 2016 persona slip through the 1960s veneer in which Jake is so surprisingly cozy. He also nails the task of bringing to life the way Al’s obsession quickly becomes Jake’s. That’s especially true in a pilot-episode sequence where Jake uses Al’s past experiences as a sort of cosmic GPS to follow de Mohrenschildt to a fancy restaurant in Dallas and determine if he’s in the employ of the CIA — while avoiding the booby traps “time” has constructed to stop his progress. 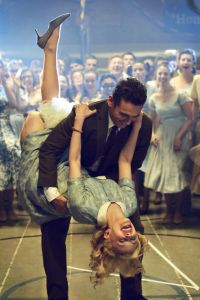 The story resonates on a deeper level, though, because Jake ignores Al’s advice to not get close to anyone in the past. His meet-cute with a beautiful stranger in a Dallas park carries with it all the electric, Technicolor possibility of love at first sight, but the scene doesn’t pay dividends until Jake’s paths cross again with the woman in Episode 3. Being Erica‘s Sarah Gadon radiates intelligence, toughness and a special brand of early ’60s sweetness as Sadie, and her reintroduction to the story raises the emotional stakes from the historical (save JFK!) to the deeply personal (can these two broken kids overcome their penchant for secrets and make it work?).

Oh, and keep an eye out for T.R. Knight (Grey’s Anatomy), keeping it wonderfully icky and very much against type as a man from Sadie’s past.

A surface-level diversion into the private lives of Oswald and his wife Marina feels shoehorned in to an already crowded story, capturing the imagination only when they’re reduced to grainy voices coming through the bugs set up by Jake and his unlikely partner-in-sleuthing Bill (the boyishly charming George MacKay).

Ultimately, though, that little bit of bloat hardly slows down a slick production that, while transporting us back in time, stakes Hulu’s claim as a serious streaming player of the future.

The TVLine Bottom Line: An engrossing, utterly unique story and winning performances from Franco and Gadon conspire to make 11.22.63 a can’t-miss TV event.