When How to Get Away With Murder last aired a fresh episode, your Thanksgiving turkey was still in the freezer — which means we’ve had 84 days to ponder that crazy flashback of Annalise and Eve watching a pre-teen Wes (aka Christophe) in a police interview room talking about discovering his mother’s body.

Executive producer Pete Nowalk is well aware that that’s a pretty long fast between OMG/WTF feasts, which is why HTGAWM won’t skimp on fleshing out that shocking backstory when the ABC drama returns this Thursday at 10/9c.

“We’re going to see flashbacks throughout the rest of the season,” promises Nowalk. “I don’t like to tease something and not revisit it — and the flashbacks are really fun to write. Famke [Janssen’s Eve] is coming back, too, so take from that what you want.”

Just don’t expect a lot of misty, water-colored memories as the show delves into Christophe’s childhood. After all, Eve’s parting comment — “Good God, Annalise, what did we do?” — implied some kind of misstep on the part of the young attorneys/sometimes lovers.

“Something is not right. It’s definitely dark. It’s definitely twisty. And it’s our biggest mystery for the rest of Season 2 — what led up to that moment in the interrogation room,” Nowalk teases. “That’s a big question mark. We’ll lead up to it and go a little past it and learn what happened between Annalise and Christophe.” 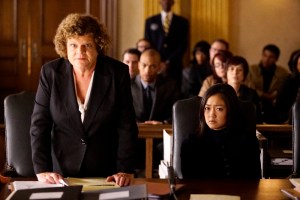 Meanwhile, back in the present day, the show has yet to definitively answer who killed Caleb and Catherine Hapstall’s wealthy parents, a fact that will loom large in Thursday’s installment.

“We left a lot of things unexplained. Catherine was found in the woods with blood on her. Caleb was still in Michaela’s apartment. There are a lot of loose ends [that will determine whether] Annalise’s frame job will work — and we deal with that in Episode 10 in a big way,” Nowalk says. “We’ll answer a lot of questions. It can’t all be swept under the rug with a big bow — ‘OK, that’s it, we’re going home!’ Those characters — Catherine, Caleb, Philip — will continue to play throughout the season.”

The implications of what Annalise and her students did at the Hapstall mansion — disposing of ADA Sinclair’s body to cover up the fact that Asher killed her; Wes shooting Annalise to muddy the crime scene; Frank sedating Catherine and making it look like she was the guilty party — will come home to roost, psychologically speaking, in Season 2’s final six episodes.

“Guilt and dealing with your sins is one of the biggest themes of the series. You’re right to wonder if anyone will get caught or pay the price — and it’s our job to tell that story in a way that hasn’t been told before,” Nowalk says. “The game of the show is how do they avoid that situation.”

What’s more, adds the exec producer, “these characters are constantly measuring their guilt, figuring out how much do they want to get away with it. Is this worth it? At what point do you just want to give up and pay for your sins? A lot of times when you see criminals alone, they break. Like with [Crime and Punishment‘s] Raskolnikov — you can’t deal with it alone. But because there’s a group here, in the sickest way, they can support each other. When one of them is about to break, someone else is there. I wanted the back half of the season to explore that group dynamic, look at the different characters bonding, and show new relationships.”

And if Annalise and her underlings eventually all wind up behind bars? “Then, we become Orange Is the New Black,” Nowalk says, with a laugh.

Are you excited about HTGAWM‘s return? Any theories on those Christophe flashbacks? Share ’em below!