Already this season, the survivors of The Walking Dead have endured a walker-dispersal debacle, a blitzkrieg by the Wolves, the fall of Alexandria, Glenn’s “death,” Deanna’s death and enough teen angst to make them feel like they were enrolled at West Beverly High. (Whew.)

But if you think their theme song for Season 6’s second half is gonna be “Things Can Only Get Better,” you’ve got another thing coming. Here’s why you should dread the series’ return (Feb. 14, 9/8c, AMC) as much as look forward to it…

Oh, and need we really warn you? Spoilers ahead, and lots of ’em!

5. Not only will Salem casualty Xander Berkeley be turning up as Gregory, the self-serving leader of the Hilltop Colony, but Jeffrey Dean Morgan will make his much-anticipated debut as the Saviors’ lethal leader, Negan, “one of the great pop-culture characters of the last 20 years,” in the estimation of showrunner Scott M. Gimple. But, as he told Michael Ausiello, “There is a long road to [meeting him]. I don’t want people to expect to see him tomorrow.” To temper all that evil, at least a little, Luck alum Tom Payne will also be joining the cast as good guy “Jesus.” In Robert Kirkman’s comic books, the erstwhile Paul Monroe becomes a tremendous ally to Rick & Co. 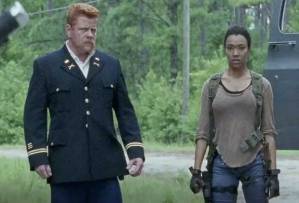 4. Glenn is almost certainly toast. In the comics, Negan infamously murders him with a barbed-wire-covered baseball bat named Lucille. And, although the series’ plots don’t always mirror the comics’, Kirkman has admitted that “it’d be disingenuous of me to say, from a viewer’s point of view, that I wouldn’t be afraid [for Glenn]. But what am I holding out hope for?” Maybe a reprieve by way of one of the “hard left turns from the comic story” with which he teased EW.com?

3. Whether or not she’s soon to be widowed, Maggie will step up rather than break down. Kirkman has hinted that, in the wake of Deanna’s demise, the congresswoman’s aide “might be changed in [more of a leadership] direction.” And, in the comics, she becomes such a force to be reckoned with that she usurps Gregory’s power at the Hilltop Colony.

2. Against all odds, Carol and Morgan’s disagreement over the Wolf whose life he secretly spared may not result in either of their deaths. As Kirkman has noted, before their confrontation, Morgan was beginning to have doubts about his stance, and when “Carol could’ve pulled the trigger… she didn’t.” Great. So now maybe they can work together to rescue poor, kidnapped Denise…

1. Sam’s big mouth is gonna get someone killed. You’ll recall that, in the winter finale, as he, Rick, Michonne, Carl, Gabriel, Jessie and Ron were sneaking through a sea of walkers while covered in zombie guts, the little boy panicked and called out for his mom. “Yes,” Andrew Lincoln confirmed to EW.com, “there will be blood.” How much? If the series” version of “No Way Out” goes down anything like the comics’ version — the episode shares its title with the 14th volume of the comics — Jessie and (thank God!) Ron are history.

Do you think the show will really let Negan kill Glenn? Who are you hoping survives — and doesn’t survive — the midseason premiere? Hit the comments!