What becomes a Legend most? Can a cold gun-wielding maniac/thief become some semblance of a hero?

DC’s Legends of Tomorrow (Thursdays at 8/7c, on The CW) raised that question from go, when Leonard Snart aka Captain Cold was among the more unlikely recruits for Rip Hunter’s assemblage of time travelers. (“I ain’t no hero,” Snart snarked at the time.) Nor does Wentworth Miller ever wish to see his alter ego don a “pristine white hat.” But becoming a Legend, somehow, some way? That’s an intriguing proposition, for both actor and character.

Here, Miller elaborates on how Legends‘ Leonard differs from the one we’ve spent time with on The Flash, the baddie’s suspicions about Rip and the prospect of shipboard romance.

TVLINE | How have you tweaked your performance as Snart on Legends versus the glimpses we’ve had of him on The Flash? How would you say he’s different?
I would say that comparing Snart on Flash versus Legends, it’s not a question of a tone shift but an expectation shift, for me as an actor and for the writers as well. On The Flash, I thought of Snart as a spice character — I get to come in, do a little dance, be funny and exit. 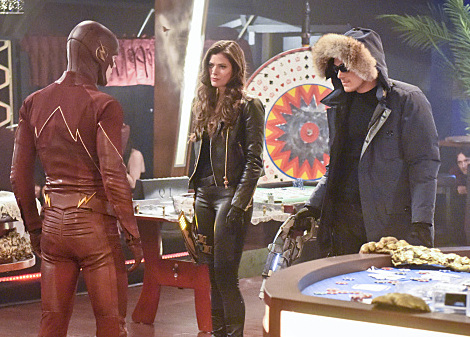 On Legends, we’re spending a lot more time with him, so the question becomes: Well, what else is there? And how do we supplement the charisma and the edge and the menace and the humor without telling me so much that all of that dissipates?

TVLINE | In Episode 3 (airing tonight), Snart runs into his childhood self. Is that the most emotional beat you’ve gotten to play?
So far — and it speaks to the core of the character’s journey, which began on The Flash, as far as his introduction into this universe. I think Snart was a model of a certain kind of man. He makes certain choices, this is what you can expect. Signed, sealed and delivered. Snart is Snart. And I think Snart has thought of himself in that way — “I’m a criminal and that’s all there is to me and for me.” On Legends, the door opens a crack and he realizes that maybe redemption is possible, maybe change is possible, maybe growth is possible. Washing your hands clean after you’ve committed X number of crimes, maybe that, too, is possible.

TVLINE | I can’t imagine you’d want full-on redemption, though.
I’m not talking about Snart wearing a pristine white hat. I hope that never happens, because I love him where he currently lives and breathes. I’m talking about Rip’s invitation to join this journey and become a hero. Snart rejects that, immediately, because he can’t conceive of himself as a hero. He doesn’t feel that that’s available to him. Yet he likes the idea of being a legend — that seems appealing and within his grasp. This adventure, bringing down Savage and saving humanity, is a noble cause — perhaps the noblest. And if Snart decides that he can be a part of that and help facilitate that, maybe redemption is possible.

TVLINE | Which dynamic outside of Snart and Mick (played by Miller’s Prison Break bro, Dominic Purcell) have you found most interesting to explore?
I think Snart is focused on White Canary (Caity Lotz), for sure. I think he respects her as a badass, but he also sees that she’s got a code, and she’s wrestling with her own demons in a way that he can relate to. But he’s also intrigued by Rip (Arthur Darvill). Rip rubs him the wrong way A) by calling himself “Captain” and B) Snart’s not used to be being told what to do.

TVLINE | Regarding White Canary, do you see the basis for anything romantic there?
I don’t know…. We’re having fun with the flirtation of it. They’re both primal characters in their own way, so that will be what that will be.

TVLINE | Then again, we haven’t seen a hint of a romantic bone in Snart’s body.
Right, we haven’t spent enough time with him to see him in that mode. I’m interested to explore that — if not with White Canary, then with some other character.